How a struggling healthcare system is fostering conversation, challenges and collaboration in the fire service 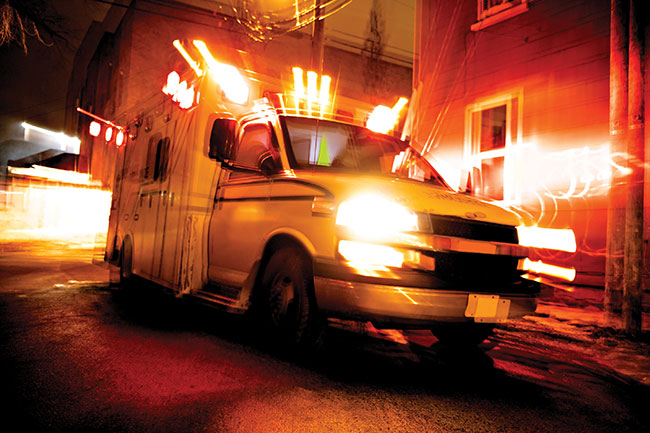 Ambulance response times are increasing in several regions for a number of reasons, including offload delays and a shortage of staff and physical ambulances. Photo by Adobe Stock / pololia

Medical calls making up an increasing share of fire department response is far from a new conversation, but circumstances brought on by the pandemic have brought both new challenges and new collaboration to the forefront.

Chris Harrow, director of fire services for the Town of Minto and Township of Wellington North in Ontario, and co-columnist of this magazine’s Leadership Forum, said that ambulance delays mean remaining on scene longer and being first on scene a lot of the time. This is adding up to more patient care than some departments are used to.

Harrow, who was a paramedic for 13 years, said it’s well-accepted that the paramedics are the medical experts, and when the crew is on-scene for 10 to 15 minutes waiting for the ambulance and doing a lot more than they usually do, they may not be ready to handle all that entails. In the full-time career world, it’s taxing resources with increased response and time on scene. For volunteers, it’s adding to the call line and this volume is taking the volunteer away from work more often and for longer.

In his region, Harrow saw the problem of offload delays building over time, with the pandemic acting as an accelerant. In the City of Guelph, it’s possible to have six or seven ambulances waiting to offload, he said. Ambulances from smaller areas are being pulled in to run city calls, which then means longer response times back to the rural areas. When this happens, the volunteer fire department gets tiered to respond and perhaps it’s a call they wouldn’t even normally attend, but they need someone on scene until an ambulance is freed up. But, firefighters are limited in what medical care they can do. They are trained to help; paramedics are trained to be the medical professionals. The strain of doing the best they can with what tools they have, and under the legislative limitations they work under, has an impact on mental health, said Harrow. On the question of whether fire departments can better prepare firefighters for the mental health demands of medicals calls, there is no easy answer. There are ways to pre-screen candidates, but the science is all new and evolving fast. You can give mental health training, but he said it’s hard to know how someone will really react until they are faced with the real thing.

“The real thing is different than a simulation. People around you are screaming, and the scenes are chaotic. Hard to simulate that in a lab.”

How you can prepare, he said, is by ensuring the frequency of your medical training is adequate and that supplies are well stocked, although he said that is not a magic solution as anytime you have an increase in something that is the common reaction. But, he noted, it sure helps to have a great relationship with your local paramedics.

Harrow has established relationships that have improved working partnerships in his region. Police, fire and paramedic management meet jointly once a month to let each other know what’s happening in the area. They take opportunities to train together, with paramedics walking firefighters through the ambulance so they know where items are should firefighters need to assist, and vice versa, firefighters can walk paramedics through hazmat scenarios. Harrow sees emergency management as the fourth partner, and the four groups have an interoperability day at least once a year where they bring in speakers from each of the three services to present on different topics. Beyond the practical, the three agencies share one huge commonality.

“The one thing that can draw all the agencies together is the mental health piece. The more you can use your allied resources to help everybody, it just makes sense to me. It’s the same tax dollar at the end of the day going toward this, so you might as well share the resources and work together on it.”

Collaborating as a province
In B.C., Dan Derby, the fire chief for Kootenay Boundary Regional Fire Rescue and president of the Fire Chiefs’ Association of British Columbia, is part of a pre-hospital care committee that is working towards a collaborative approach with local community agency. The fire first responder relationship with BC Emergency Health Services (EHS) has reached a positive turning point.

“We are having conversations with the Ministry and BC EHS that weren’t happening before right at the leadership level…How can we affect positive change for pre- and out of hospital care? That’s the goal. And we’re all trying to leave some of our history at the door and deal with our issues. We’re the most optimistic we’ve ever been about affecting change and in our involvement in the delivery of our hospital care from a fire first responder perspective.”

At the start of the pandemic, a pre-hospital care committee was formed to manage the response and pandemic changes instituted by Dr. Bonnie Henry. This committee brought together key players such as BC EHS, the Ministry of Health, Fire Commissioner, First Nations’ Emergency Services Society of British Columbia and the Patient Voices Network. The first six months were dedicated to pandemic response. Prior to the pandemic, an auditor general’s report on pre-hospital care was released that identified several areas BC EHS needed to focus on and tasked the Ministry of Health with working with local governments and BC EHS to ensure a coordinated approach to pre-hospital care that resulted in medical oversight. An important piece was sharing signed agreements and confirmation that first responders were being dispatched to the right events.

After building a foundation of working together, the pre-hospital care committee transitioned from the pandemic to focusing on the auditor general’s report. Around the beginning of this year, a draft discussion paper was completed by the groups dealing with four different areas. The first responder agreement was an outcome of the other three areas, from the group’s perspective, so now they are in the middle of consultation with the fire services, CEOs and local governments across the province, said Derby. A facilitator was hired to ensure consistent delivery and consultations were done in zones to create opportunities to meet. Six consultation sessions were planned with a schedule to wrap at the end of June, after which the committee will spend the next couple months going through feedback. The work with the pre-hospital care committee is aligned with the position paper on local community choice.

“The position paper comes down to community choice – advocating that at the local community level, it’s up to you the level of care you want to provide. Being careful not to propose that everybody wants a new bar, up or down. We have communities that want to provide a higher level of care, but there are also communities talking about a lower level of first responder care in their communities – with the challenges of long wait times and those sorts of things, their members aren’t interested in doing those types of calls.”

“It feels good. It feels like we’re making progress. It’s been a ton of work. Between the pandemic and the pre-hospital care conversation, I probably spend half my time in my role as president of the association in that conversation. It’s crazy to think, but it’s also a big piece of the level of service most communities provide, so it warrants it…At the end of the day, if we’re able to assess and release as an industry, in the pre-hospital care continuum, what we’re going to do is free up resources on both ambulance and fire department side to attend the calls we need to attend – the higher acuity calls – and what we have now is overuse of the 911 system for calls that don’t work going to the emergency room. As a group we’ve built the foundation that will allow us to have those conversations and work together to make sure we’re sending the right resources to the right calls together.”

Derby noted that they are in no way coming up with the solutions and fixing the problems in the province today. It’s all a work in progress, and the open dialogue is breaking down silos so the groups can work together to develop solutions moving forward. Derby expects that coming out of this, there will be clear expectations on training and licensing requirements that a community can commit too.

“Relationships have been built and are starting to be normalized from the perspective that we can just pick up a phone and have a conversation that we never used to be able to have. That’s pretty excellent in itself and speaks to the commitment to change to support the level of risk communities want to meet.”