It has been two years since I created the firefighter survival maze, called Firefighter’s Ghost. The maze was first introduced at the 2014 annual volunteer firefighter training seminar hosted by Oliver Fire & Rescue in British Columbia. 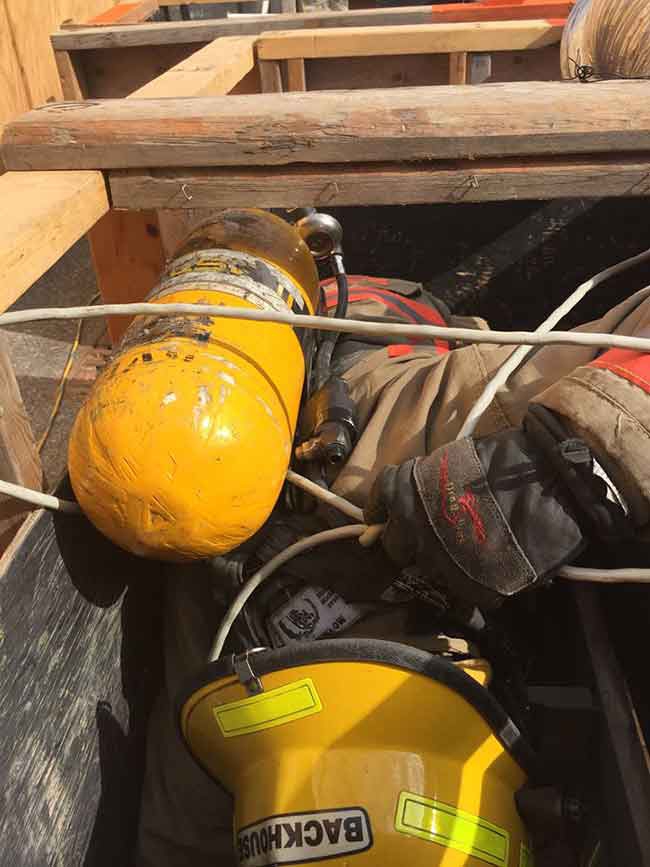 Editor’s pick 2016: No. 3 – Ed Brouwer is passionate about training

At that event, our SOOHOT (Saving Our Own Hands-On Training) crew evaluated more than 100 firefighters as to whether or not they would call a mayday. The evaluation was a huge eye opener when only one firefighter was successful (Boston Bar Fire Chief Eric Phibbs) out of 105 members representing 50 departments who took part.

This year’s training seminar was held May 14 and 15 in Osoyoos and once again we were invited to bring our maze. The results were slightly better, but not great: only four out of 95 members from 38 departments were successful. Congratulations to firefighters Tyler Bannerman from Sidney Fire Department, Darrin Massullo from Tulameen Fire Department, Steve Hoodicoff from Robson Fire Department and Tegan Burton from Armstrong Spallumcheen Fire Department – the first female firefighter to beat the maze.

The Firefighter’s Ghost survival maze is more of an evaluation prop than an instructional one; it was built in honour of our fallen brothers and sisters and it is our hope that firefighters can learn from their sacrifices.

The exercise begins when teams of two firefighters wearing complete PPE including SCBA (masks are 90 per cent blacked out) are led to a staging mat. Prior to this, each firefighter pulls two playing cards from a deck and we add the numbers of their cards, divide by two and that is their air time. The times range from 4.5 to 12 minutes, but it is all a head game. The teams are asked if they want to take anything in with them, and if they ask for a radio we give them one, if they don’t, oh well. Teams are then led to the maze entrance, a 0.6-metre (two-foot) wide by one-metre (three-foot) high tunnel we constructed out of 2x4s and plywood.

Our instructors, armed with clipboards and evaluation sheets, follow the teams, marking a pass or fail in the appropriate spaces. The whole maze is painted flat black, and on that weekend, brother it was hot! Out of the more than 90 firefighters who attempted this evaluation, eight bailed out part way through, overheated, stressed out, disoriented and gasping for breath. Some ripped their face pieces off in full panic mode. We also had three medical extrications from the maze. This was a first for us; good thing we have a paramedic on our crew.

I have been accused of being hard on firefighters when it comes to safety; perhaps that is why I tore a strip off of two firefighters, on two different teams, who had to bail and leave their partners because they were hungover from the previous night’s party. We lost valuable training time because we had to shut the maze down and get our paramedic in to help extricate them; their partners, unable to complete the evaluation, were mad, and rightly so!

Firefighters owe it to their departments to disclose the fact that they shouldn’t be going into a building if they are unfit. Had this been a real fire, the firefighters jeopardized their partners’ lives and put the rest of the members at risk because they had to go in and save them. Party all you want, but don’t you dare hide the fact you are hungover from your incident commander.

As teams begin the maze they are confronted with an entanglement section. Many firefighters get held up by a small, thin piece of wire that wraps itself tighter around their BA packs the more they pull. Teams are informed they can use any tools they might have in their pockets, yet, during the training weekend, not one firefighter carried even a simple pair of pliers (13.95 at CTC), which could have freed them within seconds. I wonder why we have pockets in our gear?

Next in the maze we activate a smoke alarm that adds confusion and causes many firefighters to reach for their PASS alarms (unsure what they are hearing). As the teams advance, the hoseline disappears under fallen debris; far too few firefighters informed the IC they had lost connection with the hose. This is a key safety point that should be addressed during SCBA training.

The firefighters are then confronted with narrow openings and blocked passages, at which point our instructors activate an alarm bell to indicate low air on one of the firefighter’s SCBA. At this point, the IC should be informed of the low-air alarm, but few firefighters take that action. Again, informing the IC is a major safety point. If a firefighter cannot reach an exit within 60 seconds after his or her low-air alarm activates, it becomes a mayday situation.

I was encouraged during the evaluations when I witnessed several firefighters successfully deal with the low-air-alarm situation. However, the encouragement was short lived. Once the firefighters called the mayday due to low air and no exit, we informed them RIT was en route. We then asked the firefighters what they wanted to do next: wait for RIT or keep advancing (at this point they are off the hoseline). The one firefighter who chose to stay and wait for RIT passed the evaluation; the others, choosing to advance, fell through the floor later on in the maze.

Teams had a lot of trouble getting through the narrow opening (space between two 41-centimetre (16-inch) centre studs); masks were dislodged, packs hooked up, and helmets, radios and flashlights fell off. It was painful to watch. At the conclusion of the evaluations, we demonstrated our cross-over method and were thanked profusely by firefighters for that tip. If you have not tried this method, email me and I’ll send you a video clip.

In the last stage of the maze, the hose is reintroduced and leads firefighters up three small steps to a second floor. Only a few firefighters during the evaluations sounded the steps. Teams often sound the first two feet of the second floor, but we anticipate that so we locate our soft and fire-weakened floor further into the building. As the lead firefighter crawls along and reaches the soft floor, we pull the pin and the floor gives way, dropping the firefighter through. In a number of cases, the partner follows right behind them. Only a dozen of the firefighters evaluated called a mayday for their partners (who are unconscious), others just sat there not knowing what to do.

This next observation really disappointed me – made me mad, really. Some firefighters wanted to call a mayday, but couldn’t: they didn’t have a radio (the lead guy had it). I discovered that the standard practice for some departments is one radio per team; this is a huge problem. Did we learn nothing from the sacrifices of our fallen brothers and sisters? Look into the 2004 firefighter fatality in Clearwater, B.C., and you will discover the lead member (who perished in the fire) had the radio and so the second man was unable to communicate his emergency. The firefighter had to use his cell phone to call dispatch to call the fire department to get him out! What a tragic event, and yet 12 years later we still have the same practice happening.

So here is the rub, the down and dirty, the low down on how to beat this maze: quite simply, know your limits and live within them. Do not go past your level of training. If you get hung up in the first section of this maze and can’t get free within 60 seconds, call a mayday and follow the instructions of the IC and RIT that is coming for you – and you win!

If you reach a part of the maze and stop due to physical (overexertion, overheating) or mental (fear, anxiety, apprehension) reasons, radio a mayday, follow instructions, and you win!

During each debriefing we revealed that this maze is not about completing the course, it is about recognizing when you should call for help – that is the only way to beat the course.

At the conclusion we handed out either a congratulations card or a deepest sympathy card. One firefighter was confused and said, “So I wasn’t successful? But I completed it! The falling through the floor was the last thing and I did that!” I just looked at him and smiled. Then it dawned on him and he said, “I got it.”

After our first session, a middle-aged firefighter approached me and while giving me a firm handshake with a tear running down his cheek he stated, “Thank you, you probably saved my life.”

Although the stats were somewhat better regarding the mayday protocols, I am still really concerned that we in the fire service spend more time teaching firefighters how to tie knots than how and when to call a mayday. The odds are that you have never given your members permission to call a mayday, let alone specific rules on when to call one. After all, firefighters are trained to be the rescuers, not victims. But think about it: RIT won’t be activated unless a mayday is called. And the sooner RIT is activated, the better chance of survival.

Please train as though their lives depend on it, because they do. This statement must be a priority for your department. It is bad enough to witness firefighters doing dumb stuff – such as sounding the floor with their handheld radio, or carrying that same radio by the antenna – but when we continue to practise procedures that have proven to cause entanglement leading to entrapment, one has to wonder if we are actually getting out the message. Improper wearing of SCBA (too loose), visors in upright positions, flashlights mounted on the side of helmets, and inability to use radios while wearing gloves are all concerns that need to be addressed during training.

When we handed out 92 deepest sympathy and only four congratulations cards; it proves again that firefighters will not rise to the occasion, but instead default to their training each and every time.

These nine points may be narrowed down to six: