Scientists believe that it’s not a matter of if but when the next major earthquake will hit the coast of British Columbia; some say the earth will rip open like a zipper. 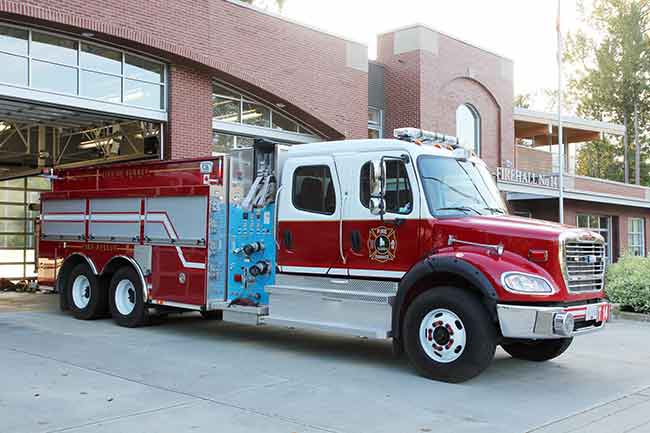 Surrey Fire Service in British Columbia purchased three new tenders in July that are capable of providing a constant supply of potable water. Natural disasters are often followed by concerns that people will get sick because of contaminated water or food. The Surrey Fire Service in British Columbia took a giant step forward in post-disaster preparation with the purchase of three new tenders

The City of Surrey – nestled in the regional area of Metro Vancouver on Canada’s west coast – is perched on top a major fault line that has built up pressure over 300 to 500 years. According to a Canadian Press story in January, seismologists predict the odds are about one in 10 that the earth will buckle and let go some time in the next 50 years.

Nothing can truly stop a natural disaster, but we can learn what to look out for and how to protect ourselves as best as we can; preparation is key.

The Surrey Fire Service has been preparing for the aftermath of a natural disaster since the development of its emergency planning program in 1994. By the very nature of being a fire department, its primary concern is the potential for multiple fires throughout the city post disaster.

Identifying water sources for suppression was easy – the city has water bodies on three of its sides, and multiple lakes, ponds and rivers within. Moving water to the fire scenes was recognized as more of a challenge. To overcome transportation problems, in 2008 the city stored 3,048 metres (10,000 feet) of 100-millimetre (four-inch) Stortz hose in a portable-on-demand (POD) container. The POD container sits ready to transport and create an above-ground water main to anywhere in the city in the fastest time possible. This was the extent of Surrey’s water-management measures until the opportunity to produce potable water was considered.

Recently the Surrey Fire Service took a giant step forward in post-disaster preparation with the purchase of three new tenders, each capable of carrying 2,000 imperial gallons. While tenders – used to transport large volumes of water to fire-related emergencies in rural areas within the city – are not a new concept, Surrey’s new tenders are capable of providing on-the-spot potable drinking water.

“When we have the major earthquake and there are water main breaks and (Metro Vancouver) water is cut off in certain areas, there will be no potable water other than what you’ve got in a storage capacity or what we can draw from lakes, ponds, pools, or any other suitable body of water,” said Surrey Deputy Chief Dan Barnscher, who is the city’s emergency planner. In the critical time immediately after a natural disaster, potable water will be in high demand and short supply until services are restored.

In 2005, Hurricane Katrina slammed into the south coast of Louisiana and caused severe destruction along the Gulf Coast from central Florida to Texas. Much of the damage was in New Orleans where the storm surged into the city. Infrastructure was wiped out and the community was left with a major water shortage that caused public health concerns. The water left behind from the storm was dirty and unfit to drink.

Natural disasters are often followed by concerns that people will get sick because of contaminated water or food. Potable water and food must be brought in to the devastated area while water-filtration plants are repaired and power is restored; this takes time.

The Surrey Fire Service is one of the first departments in Canada to have the ability to provide its citizens with a supply of immediate drinking water in the event of a disruption in potable water distribution, or, worse yet, a complete water-main failure resulting from a natural or man-caused disaster.

The Purifire system uses sediment filters, carbon filters, UV and ozone devices to remove biological and chemical contaminations from fresh water sources, and guarantee the best purification ability and safety to human health. The system – which was added to for an additional $25,000 per truck – is capable of filtering 2,273 litres per hour, or 54,553 litres per day, for a three-truck total of 163,659litres of potable water per day, provided there is a constant supply from a fresh water source. Simply drop the hose into any body of fresh water and flick a switch to activate the purification system.

Surrey Fire Service in British Columbia purchased three new tenders in July that are capable of providing a constant supply of potable water.

“This is something we hope we never have to use,” Barnscher said, “but it’s such an inexpensive expenditure over the lifespan of the vehicles.

“All it takes is one incident where there’s a major water-line disruption and our citizens could find themselves in a desperate situation. We will provide on-site water purification, and then pump it out of a hose that’s drinkable, what better method is there than that?”

Surrey fire crews have considered the logistics of water management if the task of creating purified potable water becomes reality; they know that the process used to move the water from the source to the purification tenders will depend on the extent of the disaster. The purification process draws water from the water tank, so the tank must be kept topped up for as long as potable water is required.

Access to the water source could be a challenge. Portable water pumps, 3,048 metres (10,000 feet) of 100-millimetre (four-inch) Stortz hose, fire trucks, and water-purification capability are tools potentially needed to produce potable water in a post-disaster scenario.

Ideally, the tenders that are equipped with the water-purification systems would position themselves next to the water source; however, it is more likely that other fire trucks with tanks will shuttle the water to the purifying apparatus in order to provide purified water to publicly accessible positions throughout the city. While Surrey’s tenders are equipped to draft through their main water pump, we anticipate that portable gas-powered pumps will be used to transfer the water from the various water sources to the tank, where it will then be transported to the tenders by trucks or Stortz hose.

There are many aspects to consider in preparation for a natural disaster; the ability to make potable water for the Surrey citizens is just one component of the big picture. Potable-water producing fire trucks give the Surrey Fire Service a powerful tool to assist people in the event of a natural disaster. It is in everyone’s best interest to be prepared.

Acting Capt. Dave Baird has worked in the suppression division of the Surrey Fire Service for more than 21 years. He also instructs for the Justice Institute of BC. In 2012 and 2013 he was a committee member for the validation of the IFSTA Aerial Operators Handbook. He can be reached at DCBaird@surrey.ca