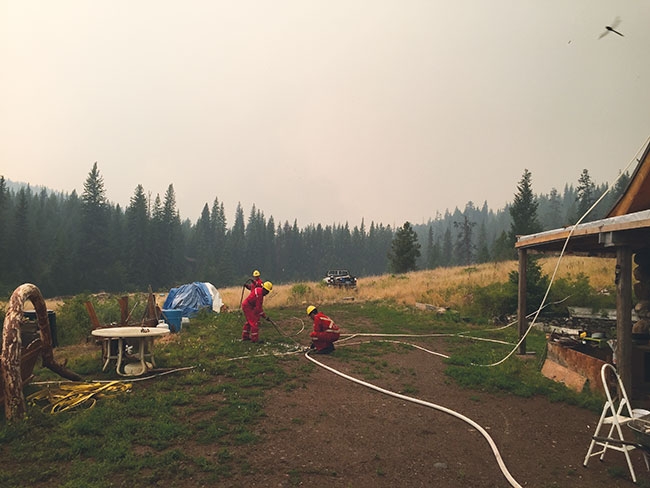 Lac La Biche County Fire Rescue crew The use of sprinklers for structural protection from wildfires was heavily employed in British Columbia during the summer of 2017.

In talking to members on their return, they understood that they made a difference; they saved people’s homes. This article will look at the basics of sprinkler use as taught to these crews before their deployment.

First off, crews should have a basic understanding of wildfire behaviour and safety, fire pumps, and structural protection strategies for the wildland urban interface. Courses such as NFPA 1051 and S215 Strategy and Tactics for the Wildland Urban Interface can provide this knowledge. While we will focus on sprinkler tactics, they must be deployed appropriately and strategically.

Inside a building, sprinklers are designed to control incipient fires. In the wildland urban interface, sprinklers are used to wet down fuels before the fire arrives, preventing ignition. The sprinklers may continue to operate as the fire passes, potentially extinguishing small fires, but wetting down is their primary function. They either apply water directly on and around structures or are set up to create a wet line firebreak between structures and approaching fire. Once set up, they can be left unmanned, freeing up resources while enhancing firefighter safety.

Rotating impact sprinklers are commonly used for wildland fires. Our department uses the Rain Bird model, which is often used in parks and agriculture. They flow about 48 litres per minute in a 15-metre radius. As a general rule, a Mark III (standard forestry portable pump) should be able to effectively feed six to eight Rain Bird sprinklers. However, the more sprinklers you have, the less flow and pressure per sprinkler head. The number of sprinklers per structure vary between about two and 15, depending on the size and scale of the structure. For a typical single-family home, two Rain Birds, located at opposite ends or corners of the house, will often be sufficient. If your crew is using sprinklers with a lower flow, this will require more sprinklers. This may take more set up time, but this can also provide more coverage options.

In addition to sprinklers you will need a 38 mm forestry hose with quick connect couplings, a 16 mm hose (5/8 inch, garden hose fittings), 38 mm to 16 mm water thief couplings, and both 38 mm and 16 mm gated wyes. Double headed nails, wire, electrical or duct tape, and zip-ties are also useful when mounting sprinklers. Sprinkler kits can be assembled or purchased, with many designed to match the typical output of a Mark III pump and fit in a standard tote tub.

The 16 mm hose has tremendous friction loss so you want to minimize the length used and connect your hose lay in a closed loop (think of circulating as opposed to dead end hydrants). Sticking the sprinkler in the ground is easy and can be effective, but for flammable roofing material — and to get better reach — an elevated sprinkler is often preferred. Using nails on houses can be damaging, so crews will often attach the sprinkler to a two-by-four or a small wood pole with tape or wire. The kits we use each have a scissor-like sprinkler mount, which simply sits on top of a peaked roof. Others are designed to clamp on to the eavestrough.

Once the sprinklers are in place, crews should turn on the water to test the layout. Consider the potential damage the spray could do to the structure. Avoid any cracks or openings, electrical components, or easily damaged surfaces. After testing, your crew may continue flowing water, or shut down and start up again later when required.

Wet line construction can be accomplished by attaching sprinklers directly to the 16 mm water thief outlet at each coupling. To get adequate coverage, the line might need to be doubled back on itself and require more than one pump. Remember that wind, obstacles, and varying pump pressure will affect the 15-metre sprinkler radius.

Different water sources can be used but it’s hard to beat a portable pump hooked up to a natural water source such as a lake or stream. However, using a natural water source can lead to debris in the water, which may block the small sprinkler opening. Crews can remedy this by kinking the hose then releasing to send a blast of pressure through the hose to dislodge the debris. If that doesn’t work you’ll need to shut that sprinkler off and clean it out.

Another common sprinkler problem is variable pressure, which can result in a poor stream. To fix this issue crews should adjust either the water pressure or number of sprinklers. If the sprinklers are used for an extended duration this may also cause parts to loosen and malfunction. Monitor then sprinklers and tighten things up if necessary. Alternatively, crews could use a more robust agricultural-type sprinkler, as opposed to lighter homeowner models, to reduce this problem.

Firefighters learn best by doing, so they should practice sprinkler skills. Training officers should have members sprinkler a building, or better yet, a group of buildings. Firefighters are creative and adaptable; given this foundation of basic knowledge, Lac La Biche County crews built on it and performed well during last year’s wildfire season in British Columbia.

If your jurisdiction includes the potential threat of wildfires and you’re not already training with sprinklers, your department should consider basic sprinkler training. You may be pleasantly surprised, as we were, to find that a relatively small investment in training could reward crews (and the affected public) with such big dividends.

David Moseley is a forest officer with Alberta Agriculture and Forestry, and lead training officer with Lac La Biche County Fire Rescue in Alberta, focused on operations; other areas of interest include instructing, CISM, and wildfire investigation. Contact him at
david.moseley@gov.ab.ca.