Canadian honours and decorations are often the most puzzling, and deliberated, aspect of a firefighter’s dress uniform. 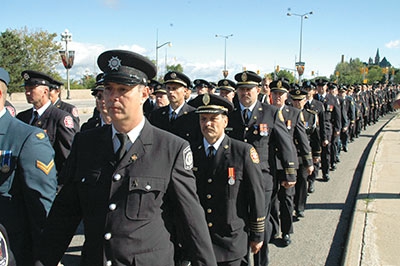 Members of the Canadian fire services attend the monument unveiling and memorial service for the Canadian Fallen Firefighters Foundation in Ottawa in September. It is common practice to wear dress uniforms

Canadian honours and decorations are often the most puzzling, and deliberated, aspect of a firefighter’s dress uniform. Although the Governor General regulates most medals though the Chancellery of Honours, sometimes there is confusion about what constitutes an official award and whether or not it can be worn on the dress uniform. Common awards that are associated with uniforms are divided into honours, undress ribbons, commendation pins and hazard skill badges.

Modern awards are often classified by the agency that presents them. Federal honours often come from the Governor General acting on behalf of the Queen and include such examples as the Diamond Jubilee Medal and the Fire Service Exemplary Service Medal. Provincial or territorial honours, such as the Saskatchewan Protective Services Medal or the Ontario Firefighter Medal for Bravery, are often awarded by the lieutenant-governor. Lastly, albeit rarely, a foreign government may bestow an honour on a Canadian citizen, such as the United States’ Bronze Star Medal, and with the proper protocol, it can be worn on the uniform. These are the three branches of awards approved by the national Canadian Honours System.

According to the Governor General’s website, the purpose of the Canadian Honours System is to “recognize those people who have demonstrated excellence, courage or exceptional dedication to service in ways that bring special credit to this country.” Federal awards can be separated into three categories: orders, decorations and medals.

The website explains that orders, such as the Order of Canada, the Most Venerable Order of the Hospital of St. John of Jerusalem, and various provincial orders, recognize “significant achievement and remarkable service.” Decorations, meanwhile, are often awarded for acts of heroism, by both civilians and those in the military, and recognize “exceptional devotion to duty.” Decorations include such honours as the Victoria Cross, the Medal of Bravery and the Meritorious Service Medal. Usually, these decorations entitle the recipient to use post-nominal initials.

Medals are the most common honour bestowed by the federal government. They recognize military service, and war and operational deployments; commemorate special events; and commend long-term exemplary service. Examples include the Canadian Peacekeeping Service Medal, which was inspired by the United Nations Peacekeepers, the various NATO service medals, the Canadian Forces Decoration (which, despite its name, is actually a medal) and the exemplary service medals for policing, fire and emergency medical services.

Provincial and territorial awards differ slightly in category and, except for the orders, should be worn to the left of all federal honours. Foreign honours, which are sometimes called imperial honours when awarded after 1972 by British or Commonwealth nations, under the authority of the Crown, can be worn only after the honour has been approved by the governor general in council and, again, only after all other medals.

Members of the Canadian fire services attend the monument unveiling and memorial service for the Canadian Fallen Firefighters Foundation in Ottawa in September. It is common practice to wear dress uniforms

Official honours (which we’ll call medals) are worn on the left side of the dress uniform. Ideally, medals should be professionally court mounted, or fixed to a piece of buckram so that the medals do not move around or bang into each other, according to the order of precedence. The medals are worn on the left lapel of the chest so that the edge of the mount rests on the chest pocket. If more than one medal has been awarded, then the mount of medals is referred to as a rack. If five or more medals have been awarded, the rack should be mounted so the ribbons overlap slightly. Medals are never worn in more than one row and should not extend past the middle of the chest or the left arm sleeve.

Wearing loose medals is permitted, but avoid placing two loose medals on either side of the brass button of the chest pocket on the dress uniform.

There are some legal aspects to consider when wearing orders, decorations and medals. Under Section 419 of the Criminal Code of Canada, it is illegal for anyone other than the recipient – such as friends or relatives – to wear the orders, decorations or medals that someone else received. This issue is most evident around Remembrance Day. Occasionally, relatives of deceased medal recipients will wear the insignia to honour that person. Other times, less scrupulous people have been caught wearing honours they have not been awarded, have not earned, or simply purchased for wear. These people are often identified by other firefighters, military veterans groups and spectators, and bring a lot of bad press to the department or agency that they claim to represent. Furthermore, such acts can result in charges and a criminal record.

Unofficial medals, including internal fire department awards, have stringent wearing conditions attached to them. Insignia that are bought or otherwise acquired (other than a replacement medal) are to be used for display purposes only and should never be worn. Honours awarded by an outside agency, such as the Royal Canadian Legion or the Red Cross, should be worn strictly on the right chest, when appropriate. Internal department awards, such as those created by firefighting associations or given out by local fire departments, should be worn on the right chest while the firefighter is in full dress uniform only. Do not juxtapose official medals with unofficial medals on the same rack; wear them accordingly and with pride.

Each medal contains two parts: a ribbon and the actual award itself. Sometimes a bar is added to the award to signify that the recipient has earned the award in more than one arena; for example, a bar may be added to the Fire Exemplary Service Medal to indicate 10 years of service. If wearing full medals is not required, recipients can wear the undress ribbons on a duty shirt. Undress ribbons should be centred over the left pocket and mounted in rows of three. Unlike medals, ribbons can be mounted in as many rows of three as necessary, with the ribbons staggered in the middle for unevenly numbered mounts. If ribbon devices have been added, such as rosettes, numerals or maple leaves, ensure that they are spaced properly and with care. Caution must be exercised when wearing undress ribbons to make sure they are not backwards or upside down. Never wear undress ribbons and full mount medals together on the same uniform.

Commendation pins have become a regular sight when meeting members of the Canadian Forces, Royal Canadian Mounted Police or St. John Ambulance. These devices can be worn with either full medals or undress ribbons and are often found centred on the left chest below the edge of the medal rack, or on the left shirt pocket when wearing undress ribbons. Commendation pins should not be confused with lapel pins, which are widespread in the fire service, and often are worn to indicate membership in a particular association or organization, or to recognize a cause such as the Canadian Fallen Firefighters Foundation. A lapel pin should be worn on the left lapel. Some firefighters consider wearing more than one lapel pin at the same time to be bad form but there is no set rule stating how many can be worn on a dress uniform.

The last set of awards to review is hazard-skill badges. These are presented to people who have completed specialized training in a specific skill. The most common examples of hazard-skill badges are parachute and pilot wings. Although not regulated, members who have been awarded these items often wear them on the uniform on the left side, centred above their medal racks. Again, those who have earned these badges know those who have not, and incidents of impostors have been reported to the police. As with medals, it is illegal to wear badges that one has not earned. Lastly, members of departments that present badges but do not have set guidelines should wear the badge centred on the left chest, above medal racks and parallel to the tip of the dress tunic collar tip.

Orders, decorations and awards are ways for firefighters to display the highlights of their careers to the public. Proper wearing, presentation and deportment, whether by a career or a volunteer firefighter, contribute to a professional appearance and instil confidence in the general public.

In addition to being a firefighter for 15 years, Kirk Hughes is an Officer of the Most Venerable Order of the Hospital of St. John and a member of the Orders & Medals Research Society (OMRS). He is the assistant fire chief of special operations for the Déline Fire Department and a local assistant to the fire marshal of the Northwest Territories. Contact him at khughes@firehousemail.com