On Vancouver’s North Shore, three neighbouring fire departments have successfully combined their apparatus-purchasing power, and it is saving them manpower and money.

The beauty of the new trucks, say all three departments’ fire chiefs, is that they were selected through a collaborative process.

“It’s just such a great example of how much we can achieve together,” said Chief Dan Pistilli with the City of North Vancouver, who was the lead chief officer for the purchasing co-op.

It took months of discussions and late-night meetings, but working together, Pistilli, representatives from all three departments and the dealer were able to find an engine specification that was the right fit for all of them.

Coming together
Chief Victor Penman of the District of North Vancouver Fire and Rescue Services said co-operative purchasing was a long-time coming for the three departments.

“Our departments are side by side by side,” Penman said. “We have always, over the years, worked fairly closely together, but there was always a bit of a silo and always a bit of redundancy and probably a lot of opportunities where we could have been working closer together.”

Recognizing that need, the three municipalities jointly funded a consultant to complete a co-operative-services study. The resulting 2010 report recommended – among other things – that the municipalities consider purchasing large equipment together.

“We chose to focus our energy on the purchasing co-op,” Penman said. Over the next three years, the co-op was formed with representatives from each department: Pistilli and the captain mechanic from the City of North Vancouver, the assistant chief and a mechanic from West Vancouver, and the assistant chief from the District of North Vancouver. Purchasing managers from each department were brought in at times to handle the business side of the transactions, including the request for proposals, the review of submissions and the interviews with short-listed dealers.

In February 2013 – after many group meetings and a rigorous process of scoring proposals – a five-year multi-purchase contract was awarded to Wholesale Fire & Rescue Ltd. (WFR).

The three trucks have only minor differences or additions, such as tweaked hosebed layouts for specific hoseloads, or electric versus manual controls depending on the department’s budget. The City of North Vancouver’s pumper is also built with a 7,571-litres per minute (2,000-gallon per minute) TFT Monsoon deck gun.

The identical engines are only distinguishable because of paint jobs, which are in keeping with departments’ colour schemes.

Perks of a purchasing co-op
One of the most valuable benefits from the purchasing co-op, Penman said, is confidence that the trucks that were acquired are the result of three departments’ collective experience of reliability and performance.

“All departments,” he said, “have a picture in their mind as to what the perfect fire truck is for them based on their own experiences. But when we got the three departments together and all that expertise in the room, we came up with a super spec.”

Another benefit of the co-op is the combined buying power, which, thanks to the dealer’s negotiations, resulted in cost savings from the manufacturer. Penman also noted efficiencies in terms of staff time dedicated to the specification process.

“If we had done it individually, there would have been three times as many resources involved,” Penman said. Having the best minds in the room together to create a uniform “super” truck saves each department from allocating resources to individual review committees to determine what apparatus works for them.

A benefit for firefighters on the ground – and one of the original goals of the purchasing co-op – is uniformity of equipment, said Fire Chief Jim Cook of the District of West Vancouver.

The idea, he said, is that during an incident when more than one department responds, all firefighters on the scene are familiar with and can operate the equipment, including the apparatuses.

“If firefighter A from one municipality was asked to go get equipment off another’s, he would be familiar with its location,” Cook said. As well, incident commanders from each department can make snap decisions based on knowledge of what the neighbouring department’s truck is carrying.

Because of proximity and blurred jurisdictions, multiple departments respond to calls near boundaries. All three trucks have been in service since summer and have had time to prove their worth on scene.

“We’ve had many occasions where those new front-line engines have been in service at those calls together – in some cases all three – and the advantages are simply evident,” Cook said.

Compromise is necessary
Benefits aside, Pistilli acknowledged that the co-op’s decision-making process was difficult at times when a department was forced to give up a desired specification. Individual budgets also complicated the process, as the final design had to agree with three municipal budget constraints.

“Coming into it, prepare to make some adjustments to potentially your equipment needs and the size of the vehicle,” he said. Each department in the co-op had to compromise to some degree; for one it was agreeing to a larger size of truck than expected, for another, the truck was a bit smaller.

“Have an open mind,” Pistilli said; finding common ground is worth sacrificing the idea of a perfect apparatus.

Dealer approved, conditionally
For WFR president Hiba Hodges, the Vancouver purchasing co-op was the first of its kind she has dealt with, and the only successful one of which she has heard.

Hodges handled the co-op sale personally and said the benefits certainly made it worthwhile. The dynamic of having three departments at the table replaced the “Why?” aspect of her job, she said.

“I usually have to be the one that’s asking why – ‘Why do you want to do it that way?’ – to figure out if it’s really the right option or not,” she said. “[Working with the co-op], I didn’t have to do any of the questioning, because they were questioning each other.”

But, Hodges cautioned, a co-op didn’t necessarily mean less work for her or the departments. In fact, having three opinions in the same room was a challenge for her as a dealer, she said.

“It is very different to cater to three departments. Even though they were very similar, we really had to find the right option and customization features that would meet all three,” she said. That meant many hours of discussion in order to find the right match.

At the same time, the three opinions were valuable, Hodges said. If each of the Vancouver trucks was purchased through a separate process, she would have missed the bigger picture of what engine works for all three.

Hodges said she would recommend other departments form purchasing co-ops, but only under certain conditions. The departments involved must be willing to come to the table and compromise, which is not always possible, she said.

“The difference with this group is that they were all in agreement to standardize to a certain point,” Hodges said. “They have to have the same mindset in terms of what they want to achieve. The reason it worked in this case is because they all were willing to adjust their SOPs, their way of doing things.”

Co-operation growing
Over the last three years the three Vancouver departments have grown closer in terms of overall co-operation, Cook said. For years they have taken part in joint training exercises, and discussions about aligning standard operating guidelines are ongoing, he said.

“This is just the start,” Cook said. “Our councils have been clear in giving us direction, to say, ‘Listen, you need to share where it seems reasonable.’ We’ve kind of pushed that envelope.”

With the first major purchase a huge success, Pistilli said, the departments are confident in making more joint purchases in the future.

“It really went so well and it’s something amazing to be a part of,” he said. 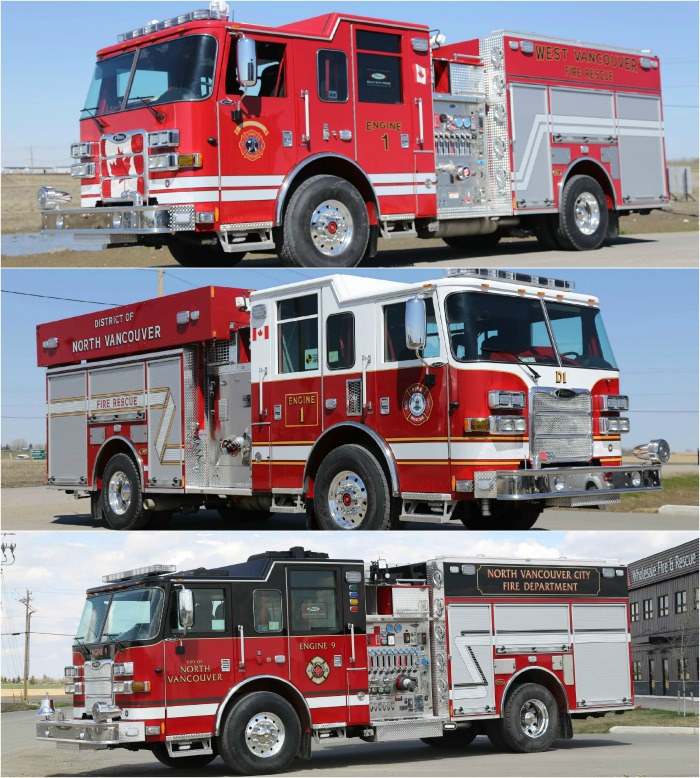