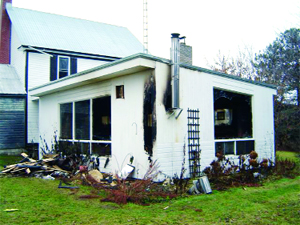 It was at 7:09 a.m. on a clear spring day in 2005 when the Arundel Fire Department was toned out for a house fire at 38 Dr. Henry St. It was a general alarm call as the 9-1-1 dispatcher reported there was smoke showing and one person from the home had a burn injury.

PHOTOS COURTESY AFD
The library of this house is a one-storey addition attached to the rear of the two-storey home. The fire originated behind the chimney in sector 4 (centre of photo). Class A foam was used to quickly knock down and extinguish the fire. Below left is the front view of the home.

First on scene was Fire Chief Neil Swail. His initial size-up found heavy smoke showing from a one-storey wooden building with a tin roof and slight pitch, attached to a two-storey balloon-frame house, which was approximately 70 years old. The size-up was reported at 7:17 a.m.

Chief Swail established command and the initial attack was started at 7:18 a.m. Mutual aid was also requested at this time for a 2,000-gal. tanker from nearby Huberdeau, which arrived within 15 minutes. A ventilation team with two fire fighters and an officer were assigned to the roof over the fire area. The attack team of three fire fighters and an officer began an interior attack with a 1-3/4" line using Class A foam.

The suppression crew made one attempt for an interior attack to reach the seat of the fire but were forced back by heat and thick smoke. Ventilation from the roof was not successful so Swail had them change to horizontal ventilation by taking out one of the large plate-glass windows in sector 4. Now with this window allowing the heat and smoke to vent from the building, the attack team re-entered and succeeded in getting to the seat of the fire, and knocked down the main fire quickly, thanks to the application of foam. This team exited the building and a second team standing by went in to perform more ventilation and conduct overhaul and salvage operations.

A second ventilation team was tasked to clear smoke from the rest of the house. Using an exhaust fan, they went room to room to complete this work.

Earlier, on his arrival, the chief was able to gain valuable information from the homeowner who had escaped the fire after a smoke detector woke him. He explained that he awoke to smell smoke in his bedroom on the first floor and when he went to investigate he discovered the fire in the library, attached to the house at the rear. He entered the room thinking he could extinguish the fire but the door closed behind him. Panicking, he opening the door, burning his hand on the doorknob, but was able to escape and call 9-1-1.

It was at 7:32 a.m. that the incident was declared under control with the all-out given at 7:52 a.m., just prior to the mutual aid department being released from the scene. Arundel remained at the incident until 10:10 a.m.

In all, three 1-3/4" lines were used. One with Class A foam was used by the attack crew, the other two were water and used for back-up and hydraulic ventilation. Also used were 2-1/2" lines supplying the pumper from the tanker. Less than 200 gallons of water was used with less than half a gallon of foam to accomplish the knockdown.

Investigation into the incident found that the fire originated in a plug in the northwest corner of the library (sector 4) behind a slow combustion stove, which reportedly hadn’t had a fire in it for three days. The fire burned up the interior wall and ceiling, eventually burning through the east wall and slightly around the prefabricated chimney for the stove. The V pattern started below the stove and directly above the plug. Estimated damage to the stricture and contents was $80,000.
There were no injuries reported by fire fighters. The owner/occupant was treated for smoke inhalation and a small burn on his hand from the hot doorknob.

Conclusions
1.     The rapid use of Class A foam at this incident limited the fire damage and the fire fighters’ exposure to danger.
2.     Getting three teams of fire fighters into operation in the early stages made for a good, co-ordinated operation.
3.     Good ventilation allowed the suppression team to carry out their assignment as safely as possible.
4.     A working smoke detector in the home saved the owner from more serious injury or death. W

The department
The Arundel (Que.) Fire Department operates from one station with 20 paid-on-call fire fighters, under the command of Fire Chief Neil Swail and Assistant Chief Charlie Hodgson. On the apparatus roster are a 1050-Igpm (1,000-gal.) pumper, an 840-Igpm (1,500-gal.) pumper-tanker and a rescue truck. It is part of a 16-member mutual aid group and averages about 10 to 15 calls per year. Arundel is located about 100 kilometres northwest of Montreal, bordering Mont-Tremblant. It is 90 per cent residential.