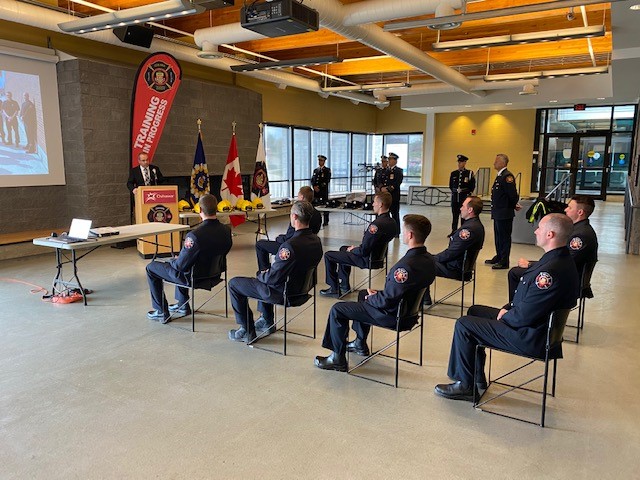 Q: How has the Oshawa recruitment process changed to coincide with physical distancing measures?

A: We had to revamp the whole program so we tried to remove a lot of the classwork. Instead, we had them doing practical, hands-on sessions that allowed for social distancing.

After we get clear of this pandemic and some of the protocols and emergency orders in place, we plan to revisit some of the subjects that we weren’t able to cover as thoroughly.

We were able to cover up all the core essential firefighting skills, and have implemented a public fire prevention module for our new recruits. We’ve shifted that to crews. After they are assigned to crews, members will then mentor the new staff by making a couple adjustments. For example, there were a few subjects that we would typical cover for three days that we were able to reorganized to get that down to one day.

So, we looked at the overall program and decided where we could be a little bit more effective while still getting adequate training and hands-on orientation for the firefighters.

Q: Walk me through how you did it? What you changed at each step?

A: We covered the core essentials of our program but looked at areas where we could reduce delivery times or parts of a certain subject that we could deliver on shift. For example, recruits don’t typically start driving in Oshawa until their second class but we were able to scale down the driving component. Before, we would have put them through a very thorough driving component that probably would have been a couple of days.

Primarily, we stuck to our schedule but we scaled everything down to the essential, need-to-know topics for the recruits.

Q: Is there a schedule you typically follow for training? Did that change at all?

A: There is a recruit training schedule that we followed before we graduated the recruits. As of this week, they started on the trucks and were assigned a mentor. Some follow-up training will also be given to them on shift by their captain or supervisor. Training divisions are also going to keep in touch with them, review topics and test their skills. So, it’s kind of an ongoing process to pick up the slack where we would normally cover in a complete Recruit Training practice package. It’s kind of a hybrid system. But I think it’s gonna be effective and, so far, we’ve had nothing but positives come out of it so, I think we’re in the right direction with it.

Q: The first class that began training after COVID-19 took over just graduated. Eight graduated? Is that a typical number of recruits for you or was that affected by all this as well?

A: It’s hard to say. We did have a couple of retirees recently, but we normally see anywhere from four to eight in our recruit class but sometimes we have 10, sometimes we have three. So, it kind of varies and it’s often based on retirements. This particular recruit class had three extra firefighters because I was able to achieve some extra funding by counsel to hire three more positions to augment our staff. So, normally without that, we would have had five recruits.

Q: You mentioned cutting down a little bit on the classroom elements. Did you guys do any online elements or was everything in person?

Again, the thing is with all these firefighters —and all firefighters across the province and pretty much in the country now —they take all their credentials prior to getting hired. Now they’re, they’re NFPA, firefighter 1, firefighter 2 certified, they’re certified and hazmat operations and awareness levels, and a lot of them have technical rescue, fire prevention education, extensive first aid, CPR training. So, they don’t come to us as they used to years ago. They’re already pretty adequately trained. We just share our philosophies, how we do things and how we incorporate all the standards of firefighting into what we do here.

Q: Is there anything that you think is important to note in terms of what you guys learned going through this process in sort of changing the model that you think other fire departments would be interested in sort of knowing or adopting?

A: I’m an open book when it comes to sharing information and we often share a lot with other fire departments: our recruit training, advice. We’re constantly doing that, which is something I promote and encourage other departments to adopt.

Something that [other departments] were very interested in was how we conducted our recruit ceremony. We held this graduation in one of our recreation facilities we usually use during recruit training because it was a bigger facility and all our rec facilities were closed. This provided lots of space and allowed for adequate social distancing.

We videotaped our recruit ceremony, including the hats and badge presentations. [Each recruit] came to the podium one at a time and delivered an acceptance speech before receiving their hats. We then provided the video to the recruits so they could then share that with their families. It was really well received.

Q: What was the response to the new training model?

A: I asked a few of the recruits how they felt going to their first shift and they all said they felt great and were ready to go; that they weren’t apprehensive. They didn’t feel like they were short-changed so that tells me we’ve done a good job.