The concept of regionalization in the fire service has been around for a number of years now, but recent factors have accelerated the concept further. 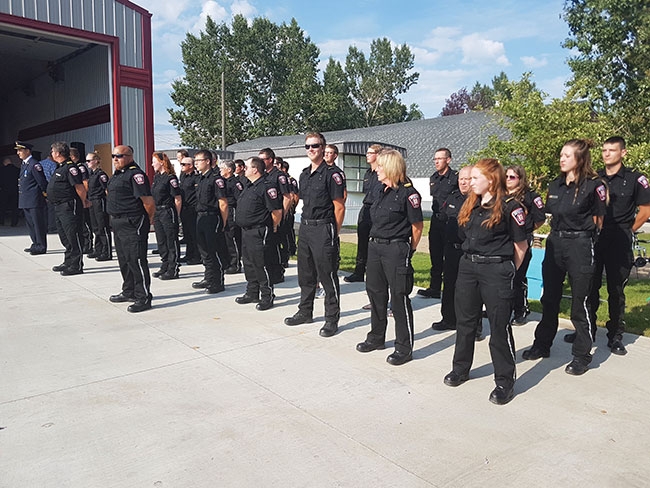 Firefighters from all six stations of the M.D. of Taber Regional Fire Department in Alberta in formation. The concept of regionalization in the fire service has been around for a number of years now

Triggers such as tightening budgets, reduced volunteer ranks and the need for fiscal restraint in uncertain economic times have made the concept more attractive to municipal governments across Canada.

Regionalization can yield some strong end results for those that navigate the process successfully, but the fact remains that it has challenges that should be fully understood and addressed before it is finalized.

Before beginning the process, it is best to have a directive from the appropriate political body. A council motion, for example, that identifies who will carry out the assessment and what the target result is will be a great segue into a dedicated mandate.

A list of reasons why regionalization is being considered, both for firefighter information and community involvement, also aids in setting out the groundwork as transparently as possible. This is important, especially if opposition and resistance is to be expected.

Regionalization is not always easy, but proper planning and communication will assist in, at the very least, moving the message forward. People want to know why something is being done and firefighters are no different. Be honest and transparent.

The first step towards the realization of a regional system is to identify the players. An inventory needs to be created that lists the number of stations or stand-alone departments that are looking to be amalgamated, the number of firefighters and fire chiefs that will be affected and what resources like apparatus and specialized equipment will need to be absorbed.

Getting a snapshot of call volumes and training standards is also a benefit. This stage is often called the “gathering” stage. Incorporating these into the project should provide a baseline on the expectations, especially as it relates to service delivery. Regionalization is usually considered to enhance public safety. Showing the current situation and how regionalization will improve community safety is important.

Individual stand-alone departments have their own identities and, often their own fire chiefs, some of whom have been in their positions for years. Asking them to step down, or revert to a lower rank under a regional system, is difficult, but can be achieved with delicate statesmanship and clear rationale.

Most volunteer fire chiefs want to do what is best for their communities and some mutual respect goes far in this process. A recent regionalization that occurred in Alberta identified a regional chief and a regional deputy chief, but retained district chiefs at all the volunteer stations. This was done without an immediate reduction in rank bars, allowing for a gradual replacement upon retirement of those long-serving chiefs. This eased the transition into the regional system without throwing out the balance of those communities. Having this type of approval moves the project forward.

The second step is determining the terms of reference and nomenclature. What terms are used between one department may not translate in terminology to another. By clearly labelling the terms, words, phrases and colloquialism of the project seriously helps in understanding it. A stand-alone department that, under regionalization, would be termed a station provides clarity and understanding to the project.

In the Northwest Territories, a merger between Rae and Edzo fire departments into the Behchoko fire service was done simply by acknowledging the differences between those two departments and agreeing to embrace change. Having common ground going forward is paramount.

Firefighters from all six stations of the M.D. of Taber Regional Fire Department in Alberta in formation.

Of course, none of this can be accomplished without leadership. Having a champion to spearhead the project who possesses the knowledge, skills and abilities to handle the task while maintaining a calm demeanour in educating people is key to overall success.

Strong leadership is not to be underestimated. Having people understand the benefits while accepting the risk, is where a strong project manager can be extremely beneficial.

With strong leadership identified, the next part is the hardest.

It is important to tie the reason for the project to the end results. Since a project usually involves returning to the governing body, the one that provided the mandate in the first place, and presenting the findings for debate, having the facts and analytics to back the results aids in the decision-making process.

If the project receives approval, it goes to the next level. A negative result likely ends the process.

If the result is positive and the concept of regionalization is to be pursued, the “selling” phase comes next.

This is where branding comes into play. A new regional fire service requires a new identity. This means new uniforms, new shoulder flashes, maybe even new truck decaling. It’s a big up-front investment, but it helps with the buy-in from affected firefighters.

Ironing out a standard set of operating guidelines is also a by-product of a regional system and best done with input from all relevant stakeholders such as the new district chiefs. Amalgamating several small, probably rural departments, into one large fire service will require patience and mutual co-operation. Having initial acceptance will help as the process gets more complicated.

Highlighting the pros of a regional system, while continuing to acknowledge and address any issues as they arise, helps with the message.

A new image does wonders for morale, and the sense of belonging to something successful and bigger cannot be underestimated.

With objectives met and approval in place, it’s time to move to outreach, where the new fire service is highlighted and presented to the public. This is the main educational portion, as the results of the project will now be on display to the public, firefighters and other emergency services. This is where the hard work pays off and the fun begins.

Regionalization may not be right for every department or service, but it is a concept worth exploring if conditions exist that would benefit a group of departments into forming a regional service.

Kirk Hughes is the deputy fire chief of the M.D. of Taber Regional Fire Department in Alberta. A veteran of the Royal Canadian Mounted Police, Kirk has served with the Burlington, Ont., Portage la Prairie, Man., Deline, N.W.T., Fort Providence, N.W.T., and Behchoko, N.W.T., fire departments before taking a position with the M.D. of Taber as director of community safety. He can be reached at khughes@mdtaber.ab.ca.