The summer’s wildfire season in British Columbia’s Southern Interior was unprecedented: multiple fires started in our drought-ravaged area and kept us busy well into September. 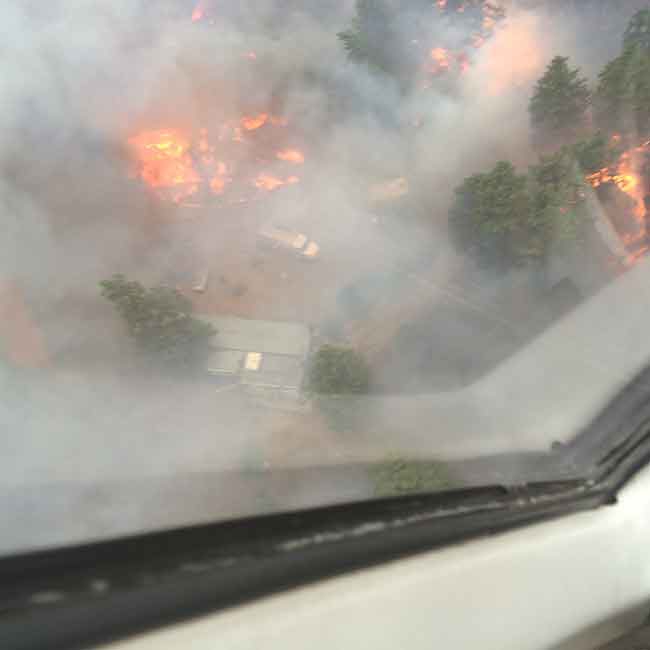 A helicopter blows smoke clear for a fire engine to navigate an escape route after conditions rapidly changed on the ground. Structural triage can help firefighters determine if conditions are too hazardous to risk fighting the fire. Firefighters must be trained to write-off a house if it meets a certain hazard criteria

By Oct. 1, we had not had any significant rainfall.

The Sidley Mountain interface fire (two kilometres from my ranch near Osoyoos, B.C.) started just over the border in Washington on Aug. 13. It was a fast wind-driven fire and within a short time crews deployed to protect the ranches along the border. The Anarchist Mountain Volunteer Fire Department and the BC Wildfire Service responded. Evacuation alerts were issued. The fire crossed the border midday and we hit it hard with both ground and air support. Eighteen long hours later, we had a good handle on the Canadian side. A few of us laid more than 3,050 metres (10,000) feet of 1 1/2-inch hose that stretched into Washington, where it is believed the fire started by lightning.

The Rock Creek interface fire began around the same time. Rock Creek is just 24 kilometres east of Sidley Mountain. When the Regional District of Kootenay Boundary completed an assessment of damage in the area, it confirmed that 30 homes and an additional 15 structures were damaged or destroyed in the wildfire. The cause is under investigation, but humans are suspected. This fire moved so fast very few people, if any, had time to evacuate with personal items.

Both the Midway and Greenwood volunteer fire departments spent countless hours on the Rock Creek fire. Then, as resources were stretched to meet those fire dragons, two other interface fires broke out in Oliver and Osoyoos: Testalinden Creek and Wilson’s Mountain. Smoke from within the Testalinden Creek fire perimeter was still visible Oct. 1. The exact cause has not yet been determined.

Just a few kilometers to the south of us, multiple wildfires began on June 28. As of Sept. 3, as many as 3,000 firefighters had deployed against fires that burned more than 900,000 acres (3,600 square kilometres) of land.

For the first time in Washington’s history, officials asked residents to volunteer to help fight the wildfires. The tragic loss of three firefighters added to the despair. Tom Zbyszewski, 20, Andrew Zajac, 26, and Richard Wheeler, 31, died when their brush truck crashed down a 40-foot embankment as they tried to escape a fast-growing wildfire.

One of my young crew members and I attended the memorial held for the three Washington firefighters on Aug. 30 in Wenatchee (three hours south of us); we felt it was important to show our support. En route we drove through the blackened countryside for more than 100 kilometres, and passed two incident bases and three fire camps. We encountered more than 65 fire engines and brush trucks still working the remaining fires. We were pretty emotional before we even got to the memorial.

On the way home we discussed how fortunate we have been this fire season. But sometimes I think it is blind luck.

I heard of several crews that were burned over in wildland situations, but because no one was hurt, the incidents were not talked about. Several structural firefighters who were doing evacuations found themselves completed surrounded by flames after the winds changed. They narrowly escaped death because a helicopter blew the smoke clear so they could see their way out.

Many firefighters were hailed as hometown heroes this summer. The problem with this unwanted title is that it creates an unrealistic expectation for firefighters to rush into every emergency incident no matter how hazardous or ill-prepared they are for the situation. That is just wrong.

I’m sorry to say this, but firefighters still don’t understand structural triage. Firefighters must be trained (given permission) to write-off a house if it meets a certain hazard criteria.

I realize that you will be reading this sometime in November, but I really need you to write a note to self: “Priority training objective for spring 2016 – structural triage.”

One way for us firefighters to deal with structural triage is to stay emotionally detached. Houses need to be viewed as fuel rather than homes. Walking away is difficult, especially when the house is owned by another firefighter, family or friend. Exceptions to triage guidelines – e.g. a local politician’s home (it does happen!) – should never compromise firefighter safety. A house is FUEL!

A house also stands a chance of being written off if it is at the end of a narrow driveway with no turnaround and no safe place for the firefighters to fight the fire. Come on guys; think before you commit to sending that shiny red truck up the driveway.

Firefighters must be trained to evaluate the survival chances of structures threatened by wildfire. At a higher level, incident commanders must understand how much risk is acceptable for their crews.

During a major interface fire, there are far more homes that need protection than there are fire department resources to protect them. While dealing with a rapidly escalating wildland/urban interface situation, firefighters may have to triage houses similar to the way a medic assesses mass casualties on the battlefield.

A medic’s efforts must be concentrated on those who stand a reasonable chance of survival. People who are essentially hopeless will be passed over in order to save those who can be saved with the available time and resources.

A helicopter blows smoke clear for a fire engine to navigate an escape route after conditions rapidly changed on the ground. Structural triage can help firefighters determine if conditions are too hazardous to risk fighting the fire.

This philosophy applies to houses exactly as it does to victims: if firefighters do not stand a reasonable chance of saving the house, they must move on.

Sending in a single firefighter or backing an apparatus down a long driveway is time-consuming. We should not take the chance of getting to a house only to find there is no way to turn around. Our first priority is to get in and out safely. Pre-planning works!

Do not chance getting stranded! You, your crew and your apparatus will become a liability rather than a much-needed asset.

Time is crucial and resources are limited during a wildfire. Depending on the situation, firefighters may have to pre-identify homes that cannot be saved. Have your members do area familiarization in the spring to prepare. Write pre-plans for your interface area and identify the wildfire hazard zones.

Talk with homeowners and educate them about their own particular hazards. Show them the places around the house where leaves have collected –  areas where thousands of sparks will collect. Woodpiles stacked against buildings, open decks, unscreened eave vents, combustible debris scattered around the property and abandoned vehicles are all areas of concern.

Tactfully tell homeowners (and yes, you can) that firefighters will do what they can, but if there is too much to do in the few minutes before the fire arrives, they will not be able to safely defend their homes and will be forced to move on.

As always, train as though lives depend on it, because they do. If you need more info regarding structural triage shoot me an email.

Ed Brouwer is the chief instructor for Canwest Fire in Osoyoos, B.C., and training officer for Greenwood Fire and Rescue. He is also a fire warden with the B.C. Ministry of Forests, a wildland urban interface fire-suppression instructor/evaluator and an ordained disaster-response chaplain. Ed has written Trainer’s Corner for 14 of his 27 years in the fire service. Contact Ed at ebrouwer@canwestfire.org