August 2016 - At 10:30 p.m. on Monday, April 11, just as Lesser Slave Regional Fire Service crew members were headed home from the fire hall after a long, tiring night of hazard-reduction burning and clean up, a call came through dispatch from OnStar (General Motors Canada/Chevrolet satellite tracking communications service) about a vehicle in the Lesser Slave River just north of Slave Lake on Highway 2. 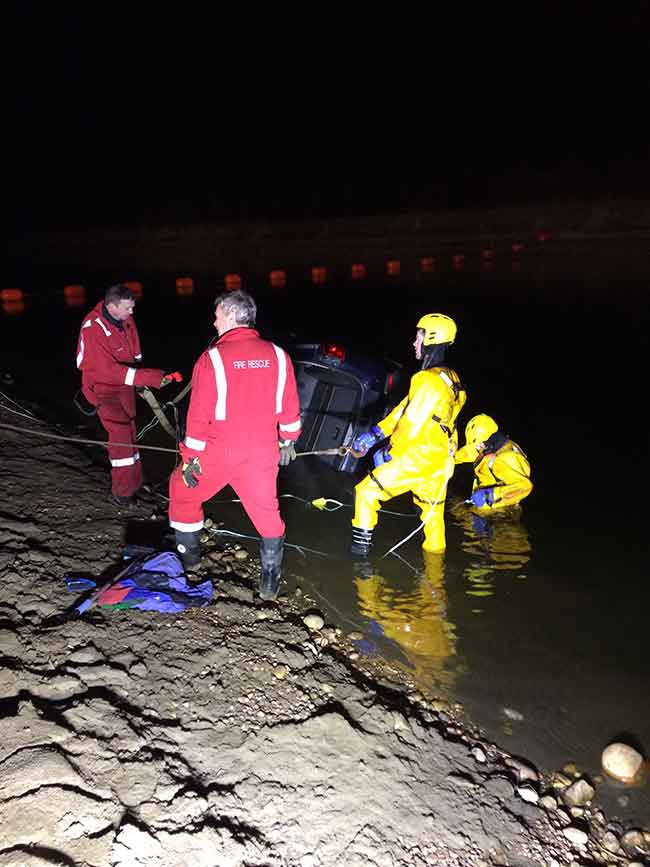 The duty officer responded in his pickup and paged for assistance from firefighters at Hall 1 in Slave Lake. Listening in on the radio, I made a couple of calls to water-rescue specialists on our team. At the GPS location, the duty officer was not able to see a vehicle or people anywhere. Fire trucks started to arrive at 10:40 p.m. and were tasked to search in other nearby water locations.

OnStar information indicated that the vehicle had gone into the river. Dispatch followed up to inform crews that one occupant had made it to the shore and the second was unaccounted for in the river. At this time, a woman who lives in a house near the river called to crews from her deck saying she could hear yelling down by the weir, downstream of where firefighters were searching.

Crews headed toward the weir and as I passed by the woman’s house, her husband filled in some blanks. An SUV entered the water downstream of the weir and floated with the current for approximately 100 metres before the front dug in to the bottom of the river, and the vehicle sank. The male passenger in his 30s got out of the vehicle and dragged himself along a line of chained buoys to shore. The female driver, also in her 30s, got out of the SUV, but was washed downstream in the current. The SUV sank nose down with the lights still on (they stayed illuminated throughout the rescue).

Two crew members immediately donned swift water-rescue suits and headed to the car to check for more occupants. The male neighbour went to the far side of the river, stopped and spoke with the male passenger, and then headed downstream on the riverbank to try to spot the woman.

As the incident commander, Deputy Chief Alex Pavcek, received more information, he quickly tasked crews. I drove with an RCMP member and two paramedics to the far side of the river (the road was terrible and we had to use our 4×4 truck to get there) to assist with the hypothermic male.

The man said he heard the woman splashing at a nearby boat launch and crews immediately converged on the area. During this search, crews discovered a very angry beaver, which was making the splashing noises.

More firefighters arrived in the third and fourth trucks and were tasked with dividing into two units. Two members in the first unit donned ice-rescue suits went into the river to look for the woman, heading downstream. Two teams on both sides of the river guided the first unit downstream. The second unit made its way down the east riverbank (at best possible speed) checking the river along the way for the missing person.

The male neighbour on the west riverbank made it 500 metres downstream when he saw the woman on a sandbar in the river, and heard her yelling. Using the radio we had given him, the neighbour directed the east-side crew to her location. Once they found the woman, firefighters entered the river and retrieved her from the sandbar.

Lesser Slave Regional Fire Service rescuers work with tow-truck operators to pull the SUV out of the river.

The woman was very hypothermic so crews started a warming fire, removed her wet clothes and covered her in their own jackets and called for a follow-up team with a Stokes basket and medical equipment. Once all equipment was on site, our emergency medical responders treated the woman quickly, covered her in more blankets and loaded her on the Stokes basket. A dozen firefighters, carrying the patient, trekked 600 metres to the staging area; it was dark, cold and the terrain was very uneven. At the staging area the patient was handed over to EMS crews and she left the scene.

Responders’ attentions turned back to the vehicle. The male SUV passenger said just he and the woman had been in the vehicle, but the woman, who was severely hypothermic, spoke with rescuers about her son. RCMP and firefighters feared that the son had been left behind (it was unclear why the SUV was even in the river) so we decided to remove the vehicle that night.

Two firefighters entered the river in ice-rescue suits and, using a pike pole, threaded a tow strap through the SUV and back to the tow cable. The tow truck operators slowly pulled out the SUV while fire crews repositioned the cables as needed.

It was a scary moment indeed, when rescuers got their first look inside the car; we saw the car-seat base, but no car seat. It was now 1 a.m. and it had snowed, rained, and frozen while we were out so we packed up every piece of water-rescue gear we had and headed back to the fire hall.

I laughed the next morning as we cleaned up all that water- and ice-rescue gear while at the same time prepared for our next set of hazard-reduction burns. Spring in northern Alberta, what a treat.