Streets plugged with the remains of a blizzard, hydrants and parked vehicles buried in snow, frozen SCBAs all hamper fire suppression efforts. 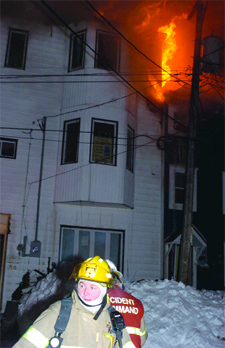 It was a challenging fire, to say the least. Heavy snow conditions in the streets, buried fire hydrants and a bitterly cold night taxed fire fighters in the evening of Wednesday, March 1, as they battled a serious fire in a block of rowhouses in the city’s downtown east-end. A numbers of calls from area residents to the 9-1-1 Emergency Centre at St. John’s Regional Fire on Parade Street reported heavy smoke coming from 14 York St., one of 14 rowhouses on the block. Fire fighters were dispatched to the scene after the first call to 9-1-1.

Upon arrival at the scene fire fighters found that not only 14 York St. had smoke billowing from the two-storey residence, but the adjacent white home as well. From that point on the initial attack teams encountered several problems.

St. John’s had been hit with a blizzard the previous weekend, dumping up to 70 centimetres of the white stuff on the city and creating numerous drifts in the streets. Overtaxed snow-clearing crews had not yet had time to fully clear this street of snow, only having made one pass prior to this incident. Fire apparatus had difficulty getting to the scene. Even after the street was made passable, hydrants were still buried and had to be dug out by fire fighters. Adding to the congestion were parked vehicles. Several vehicles had to be taken from the snow and towed away. Because the rowhouses were attached, it became obvious to command that the safest thing to do was to evacuate all 14 homes.

Ploughs dispatched
City ploughs were also dispatched to the scene to provide extra snow clearing to allow apparatus access. In their haste to help, several supply lines were buried by the snow clearing efforts. Traffic on Cochrane, Wood, Gower and Duckworth streets was blocked by police vehicles.
Standard operating guidelines in St. John’s call for two pumpers to be dispatched to a fire scene, but, as Fire Superintendent Don Byrne explained, “three pumpers were called to assist in tackling the blaze. We knew we were going to have problems getting into the building so we put an extra pumper and crew on the scene right off the bat.”

The initial attack team entered 14 York and began fighting the blaze, pulling down ceilings and trying to extinguish it in an aggressive interior attack. Flames became visible from the top of the structure indicating the fire had burned though the roof and by then 30 York was also involved, with flames showing through the eaves.

Byrne said, “We had some unexpected fire showing in the back of the building and rather than put anyone at risk we called them out.”

SCBAs begin to freeze
Fire crews encountered yet another problem when some of their equipment and SCBAs began freezing up in the bitterly cold conditions. Wind conditions were light, which was a factor in limiting the spread of the fire. Fire fighters fought the blaze until the early morning hours of the next day.

“Two of the homes damaged by the fire were occupied and the third, the aforementioned white home, was under renovations,” said Byrne.

On March 2, after conducting its preliminary investigation, The Royal Newfoundland Constabulary said it appeared the fire was caused by an electrical malfunction in the wires between the residences at 28 and 30 York St. The exact cause is undetermined. The rowhouses at 26 and 32 York also sustained smoke and water damage.

The department
The St. John’s Regional Fire Department, administered by Director of Regional Fire Services Michael Dwyer, P.Eng., operates from seven stations, six of which are staffed by full-time fire fighters 24 hours a day and one (Goulds) staffed by full-time fire fighters eight hours a day (the 31 volunteer fire fighters of the Goulds Vol. Fire Dept. provide emergency response service within their geographic area of responsibility from 4 p.m. to 8 a.m., Monday to Friday and during weekends). The Operations Division consists of 168 full-time staff and 37 recruit fire fighters providing suppression and rescue services while the Support Services Division, with 18 staff, is responsible for fire prevention, communications and dispatch, hazardous materials/special projects and training. There are four staff in the administration division and four in the mechanical division. The current apparatus fleet consists of  10 pumpers,  three rescues, two aerials, one quint, one Snorkel and 20 support vehicles. Its annual operating budget is $18.4 million.