Fire personnel are encouraged to report fires for a new database aimed at reducing Indigenous fire-related death and injury. 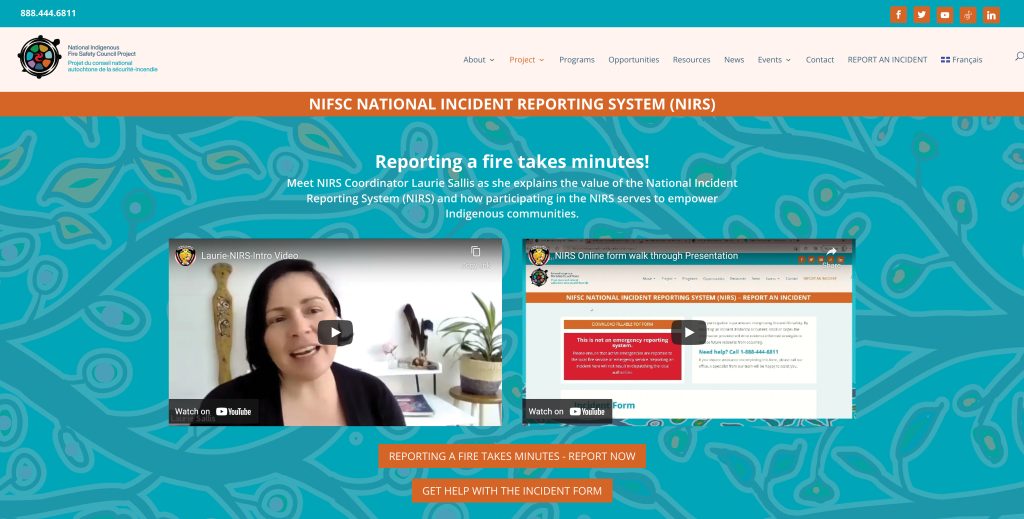 Fire incident reporting can be done through the online form available at indigenousfiresafety.ca/nirs or by calling 1-888-444-6811

A nation-wide system for reporting fires has been launched as a critical step toward reducing the high toll that fires take on Indigenous communities in Canada.

For many years, data from Statistics Canada and other sources has demonstrated that Indigenous people in Canada have a disproportionately higher risk of fire-related injury and death than the rest of the population, yet a lack of comprehensive data on fires in First Nation communities has prevented the development and deployment of effective interventions.

To address this gap, the National Indigenous Fire Safety Council (NIFSC) Project is building a database with the intent to identify trends, deficits, and emerging risks for Indigenous peoples in order to develop targeted fire and life safety education, programs, training and services.

To build the database, the NIFSC Project launched the National Incident Reporting System (NIRS) in summer 2021 to collect, store, and analyze data specific to fires in Indigenous communities across the country.

“We need data to fully understand why and how fires occur, so that we can direct our attention to the root causes and prevent future fires from happening,” said Blaine Wiggins, executive director for the Aboriginal Firefighters Association of Canada (AFAC), which represents regional Indigenous emergency and fire service organizations across the country and manages the NIFSC Project. “The simple act of reporting a fire will help support the long-term reduction of fire-related injuries, deaths and property damage. Simply put, it will save lives.”

Anyone can report a fire incident, including the Band office, Chief and Council and on-site fire personnel, a nearby fire department, police or RCMP, insurance company or member of the public. This can be done through the online form available at indigenousfiresafety.ca/nirs or by calling 1-888-444-6811. A video on the NIRS webpage provides step-by-step instructions on how to submit an incident using the online reporting form.

How the NIRS works
After a fire incident is reported to the NIRS, the data is entered into a secure Canadian-controlled repository along with similar data from across Canada and is secured and encrypted. The collected data is then organized and analyzed.

Over time, as the data matures and more incidents are recorded, it will reveal trends and provide real-time information that can be shared back with communities and regional organizations to  plan public education initiatives and identify resources required to improve training and public safety.

The expectation is that fire incident rates will decrease over time due to an increased knowledge of risks. Indigenous communities will be safer as fire and life safety practices, knowledge and public education improves.

Authored by Mohan B. Kumar of Statistics Canada’s Centre for Indigenous Statistics and Partnerships, the report showed that Indigenous people in Canada are five times more likely to die from a fire than the general population, and that the risk increases to 10 times if they live on reserve and 17 times if they are Inuit.

Further insight – and more troubling data – can be found in a July 2021 report from the Ontario Chief Coroner’s Table on Understanding Fire Deaths in First Nations, prompted by multiple fire-related deaths in a number of Ontario First Nation communities.

When reviewing 56 deaths in 29 fires that occurred in 20 First Nations communities from 2008 to 2017, the report found children and older adults to be at the highest risk of dying in a fire. In particular, Indigenous children up to age nine were 86 times more likely to die in a fire than non-Indigenous children.

The study identified a widespread need for smoke alarm education and provision, along with instruction on fire escape, fire safety and facility maintenance delivered in a manner that is tailored to the community’s needs. A lack of timely fire response was observed, and further study was recommended on factors such as construction materials, socioeconomic issues (including overcrowded living conditions), and the month and time of day fatal fires occurred.

Many questions remain. As the NIFSC Project builds a robust Canada-wide database, it expects to shed light on the systemic issues and circumstances leading to the heightened Indigenous fire risk, while also opening doors and creating the relationships required for the delivery of effective and appropriate measures.

“Historically, there wasn’t a recognition of the need for retrospective fire data specific to Indigenous communities, or a vehicle for collecting it, for the development of culturally sensitive interventions,” Wiggins noted. “This meant programs or services tended to fall short because they lacked the necessary cultural perspective. Because this program is being managed and delivered by Indigenous people, we hope to elicit trust and confidence from those communities.”

Delivering broad benefits
At the heart of the reporting system and database is a desire to reduce fire-related injuries, deaths and property loss among a vulnerable population in Canada. Beyond this important goal, the initiative will ensure limited resources are applied where they will have the greatest impact.

The collection and analysis of fire incident data will allow for evidence-based decision making to inform economic planning and the development and prioritization of effective fire and life safety education, infrastructure and services. The NIFSC Project, which is currently developing and delivering fire prevention and public education programs, will serve as a guide and resource in this area.

In the long-term, trends and insights emerging from the NIRS data will clarify the root causes of increased Indigenous fire risk and enable future targeted investments to support safer communities.

The initiative will also bring a valuable Canada-wide perspective. Given that there is no national jurisdiction responsible for fire services in Canada, the amount and type of information maintained by the provinces can vary widely. Having a national database focused on Indigenous fire incident data will allow Indigenous communities as well as the broader Canadian society and the fire service to benefit from lessons learned.

National Incident Reporting System details and reporting instructions can be found at indigenousfiresafety.ca/nirs. •


Related
Use data to drive decision-making
Is taller safer?
Volunteer Vision: The year that was, the year that will be
Leadership Forum: How leaders emerge