Lead hand stayed on board until all his crew were evacuated 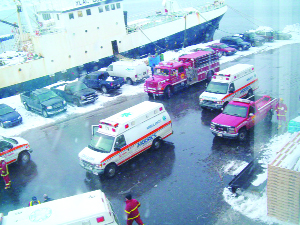 A stevedoring crew discharging the factory freezer trawler M/V Petur Jonsson were sent to Carbonear General Hospital early Tuesday, March 7, 2006 after being exposed to ammonia from the ship’s freezer units. The 17-member crew was off-loading cargo from the vessel when engineers, fixing an ammonia leak, turned on fans and opened a freezer door adjacent to the discharge hole sending deadly ammonia gas into the crew’s work area. Also on the vessel at the time of the mishap were two Department of Fisheries and Ocean officers and an independent monitor bringing the total sent to hospital to 20 workers.

Ammonia is a colourless but pungent chemical used in refrigeration.  The ammonia is housed in what's called a closed system. “The engineers were aware of a  leak and had finished pumping the ammonia out of the system to repair the problem,” according to the ship's captain. “However,  they were not aware of just how much ammonia had built up in the small freezer room, referred to as the tuna freezer. The engineers in the process of preparing to enter the freezer and continue the repairs, turned on the fans in the small room forcing the build-up of ammonia out the door and into the work area.  So unaware and unexpected was the build-up that the ship's engineers themselves did not feel the need to don SCBAs and were only dressed in regular working clothes.”

The call for assistance was placed from the Harbour Grace Cold Storage company at 9:17 a.m. by a worker at the facility, reporting an ammonia leak on board the vessel and that workers were overcome by the gas. The shift foreman  placed a call to Carbonear General Hospital who dispatched their ambulance, Moores Ambulance Service, as well as the local Young's Ambulance service. The shift foreman confirmed that all employees were off the vessel and accounted for by roll call.  The vessel's crew was safe. The two DFO officers and the independent monitor were accounted for as well.

The Harbour Grace Volunteer Fire Brigade responded with Rescue Unit #2, Units #3 and #6 and Pumper #4,  three officers and 14 fire fighters. Upon arrival at the scene fire fighters were given a quick briefing on the gravity of the situation, and the circumstances surrounding the evacuation of the vessel.  Fire fighters joined ambulance attendants in assessing casualties and administering oxygen to those in need. Fire fighters also accessed stevedoring crew members who had been sent to the canteen area and determined it best to also send all these workers to hospital. The brigade's rescue van – Unit #3 – was used to transport seven of the workers to the hospital.

Fire command was also informed that the two more seriously affected of the crew were a worker and the lead hand, Norman Windsor. He stayed on the factory deck of the vessel until all of his crew were safely out of the hole and up on the main deck. As a result, Windsor inhaled much more of the ammonia-laced air. After returning to the main deck of the vessel, he passed out.

Windsor was taken from the vessel on a stretcher, and having been placed in the first ambulance to arrive on scene, was quickly taken to Carbonear General Hospital. The other worker walked to the second ambulance, and was transported to Carbonear, held for observation, and later released. The lead hand was kept in hospital overnight and released the next day.
“I felt a breeze (apparently from the fans being turned on) and it was carrying a very strong odour,” said Windsor after he recovered. “I immediately knew it was ammonia and I knew it was bad. Thankfully this ship had fixed ladders in the discharging holes enabling the crew to climb out quickly.  Most don't.”

It usually takes six to eight minutes to retrieve ladders from the wharf and put them in the holes for the stevedores to get in and out of the workplace. “Only for those ladders, I'm afraid we would have had bodies down there Tuesday,” he noted.

Fire Chief Sonia Williams of the Harbour Grace Volunteer Brigade said, “When we arrived on the scene all the workers were off the vessel. The two fisheries officers and the independent monitor as well. The monitor had left the scene and returned to the hotel, so I sent an ambulance to transport him to the hospital also.”

“Responding on the call were four apparatus from the Harbour Grace VFB, as many as five ambulances, used in rotation, the RCMP, as well as officials from Transport Canada. Provincial Occupational Health and Safety investigators and Transport Canada are investigating the incident,” noted Williams.

Ron Lynch, operations manager with Harbour Grace Cold Storage said, “I have been in this business for 30 years (and) I've never seen such an incident; our safety procedures went very well. It’s something you plan for but hope never happens.  We are tremendously relieved and thankful.”

“The company and this vessel have been off-loading at Harbour Grace for 13 years without incident,” he said.