On July 5, 2010 a wood pellet silo in Norway exploded when firefighters released inert carbon dioxide into the headspace to lower the oxygen content and suppress a smouldering fire. The lesson from this incident is that the use of carbon dioxide to suppress silo fires is unsafe. 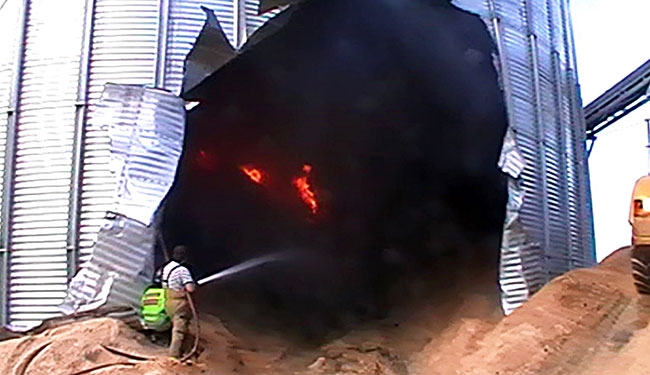 A wood pellet silo in Norway exploded when firefighters released inert carbon dioxide into the headspace to lower the oxygen content and suppress a smouldering fire. On July 5

Smouldering fires produce flammable pyrolysis gasses. The gasses can travel and accumulate, for example in the headspace of the silo. The release of carbon dioxide from high-pressure cylinders can generate static electricity with sufficient energy to ignite the pyrolysis gases.

■ Smouldering fires
Smouldering fires in wood pellets storages can occur for a number of reasons. There are plenty of examples in industry where pellets self-heat deep inside an undisturbed pile. Another known cause is mechanical friction heat in, for example, a roller bearing, which can ignite dust particles. Embers can be difficult to detect and they can travel in conveyor systems and start fires in storage areas.

Water is often an unsuccessful method of fighting smouldering fires in bulk storage silos. Water from sprinkler or deluge systems will only cause damage to the silo and is ineffective in suppressing deep seated fires as the water will generally tunnel down through the outside of the material instead of wetting it through.

■ Suppress fires with inert gases
Alternative fire fighting strategies have been devised which use the injection of inert gases to suppress combustion. Inert gases can deplete the oxygen available for combustion and quench the pyrolysis. The most commonly available inert gases in large quantities are nitrogen and carbon dioxide.

■ Pyrolysis gases
Oxygen-deficient smouldering fires produce pyrolysis gases. A typical pyrolysis gas is carbon monoxide, which is poisonous and flammable. The presence of unburned pyrolysis gases is a known hazard to firefighters. If a compartment fire has little or no ventilation, leading to an oxygen-deficient environment, large amounts of unburned gases will accumulate. The gases may remain at a temperature hotter than the auto-ignition temperature. The sudden access to air by breaking a window or opening a door may result in large flames rapidly expanding towards the source of oxygen; this is known as a backdraft.

Mixtures of fuel and air will burn only if the concentration of fuel is within certain limits, the so-called flammability limits. The limits for methane, for example, are 5-15 per cent volume. Carbon monoxide has a much wider flammability interval, the lower and upper flammability limits are 12.5 – 74 volume per cent. Mixtures of pyrolysis gases and air, at temperatures below the auto-ignition temperature are therefore likely to be in the ignitable range and able to cause an explosion if they meet an ignition source. Carbon dioxide may provide that source of ignition.

■ The Norwegian silo fire
The silo in Norway was half full, with an inventory of about 3,500 cubic metres of wood pellets. The pellets had self-ignited and started a smouldering fire deep inside the pile. The first indications of trouble came about midnight when sensors in the pile registered elevated temperatures. Later came an alarm from the silo’s fixed carbon-monoxide detector.

Firefighters were quick to order a shipment of nitrogen to be able to inject into the silo to quench the fire. For a number of reasons – it was late at night and the nitrogen gas production facility was located several hundred kilometres away – the tanker truck was estimated to arrive about noon. A revised estimate pushed the arrival of the tanker to late afternoon, at the earliest.

Firefighters are people of action and it is easy to imagine just how unattractive it must be for them to stand idle next to a burning silo, merely waiting for a truck to arrive. Unable to wait, firefighters began collecting CO2 bottles from nearby power stations and industries. Only 22 bottles were available, about 220 cubic metres of CO2 gas, just five per cent of the headspace volume. Although the effect of CO2 injection was thought to be limited because of the limited quantities available, out of sheer frustration a CO2 attack was decided, in the hope that it at least might attenuate the fire until nitrogen supplies arrived.

A ladder on the silo led to a fixed platform, which provided access to an inspection hatch in the roof. The firefighters decided to manually discharge the CO2 bottles though this hatch opening. When discharging the fifth CO2 cylinder, the silo exploded.

The firefighters were briefly enveloped in flames, but fortunately their personal protective equipment offered excellent protection and they suffered minor burn injuries only. Static discharges from the CO2 bottles may have ignited the pyrolysis gasses. It is conceivable that that the firefighters themselves inadvertently introduced the source of ignition that led to the explosion, which easily could have killed them had the blast been strong enough.

■ Hazard under-appreciated
A recent paper in Biomass and Bioenergy (Carbon dioxide not suitable for extinguishment of smouldering silo fires: Static electricity may cause silo explosion – Volume 108, January 2018, pages 113-119) examines international standards, guidelines, recent editions of frequently cited pellet handbooks and other literature. The paper argues that the electrostatic hazard of CO2 is widely under-appreciated, across countries. The situation appears particularly grave for NFPA 12 on carbon dioxide extinguishing systems, which gives ill-conceived advice on the application of CO2 to deep-seated fires involving solids subject to smouldering. NFPA 69 and NFPA 850 should also be revised to highlight the hazard.

■ Past accidents forgotten
In the past, major explosions have been attributed to electrostatic ignition of flammable vapours during the release of CO2 for fire-prevention purposes. The most dramatic explosion may have been that of a U.S. Air Force underground tank with JP-4 in 1954, which killed 37 people. The victims were officials, technicians and contractors who were standing on the roof of the tank while carrying out acceptance tests of the tank’s novel carbon dioxide fire extinguishing system. Unfortunately, there is evidence to suggest that those early lessons learned have at least partly passed out of sight.

We wish to alert the community that suppression of a smouldering silo fire with carbon dioxide is potentially unsafe. Firefighters have no means to determine if the atmosphere in the silo headspace is ignitable. The release of liquid carbon dioxide is associated with electrostatic discharges with sufficient energy to ignite flammable pyrolysis gases. The result may be an internal explosion with loss of life.

The full text of this article appears on www.mydustexplosionresearch.com/smoldering-fires-carbon-dioxide and permission to reprint this excerpt comes courtesy of Chris Cloney.

■ Applicable Standards and Difficulties
The paper [Hedlund, F.H. (2017). “Carbon dioxide not suitable for extinguishment of smouldering silo fires: static electricity may cause silo explosion”. Biomass and Bioenergy. 108:113-119] examines major standards, guidelines, recent editions of frequently cited pellet handbooks, and other literature as-per their mid-2016 versions. It presents examples where the hazard is not stated; where the standard, guideline or recommended practice gives potentially ill-advised recommendations; and where the absence of warning may have serious consequences
The situation appears particularly grave for NFPA 12: Standard on Carbon Dioxide Extinguishing Systems, which gives ill-conceived advice on the application of CO2 to deep-seated fires involving solids subject to smouldering. NFPA 69 and NFPA 850 should also be revised to highlight the hazard.

■ Don’t Confuse Terms
Part of the problem appears to be a lack of precision in terminology. The usage of the terms purging and inerting is not entirely unambiguous in e.g. NFPA 69 on explosion prevention systems. This is a serious shortcoming.
Carbon dioxide may be a suitable inert purge gas because purging, by definition, ensures that an ignitable mixture never forms. The introduction of a possible source of ignition due to electrostatic discharges is of no concern, in theory at least. But purging should not be confused with inerting where an ignitable mixture of flammable gas and air is made safe by adding an inert gas. Carbon dioxide appears to be unsuitable for this purpose due to the high chance of electrostatic ignition.

Another major issue is lack of clarity in the meaning of the terms fire and extinguishment, which are not defined in e.g. the NFPA 12 terminology section. The application of CO2 is excellent for extinguishing a fire with flames, but unsuitable for quenching deep-seated smouldering fires without a flame.

Frank Huess Hedlund is a Risk Expert at COWI and associate external professor at the Technical University of Denmark (DTU) teaching risk management. He has 25 years of experience, working for clients in industry and government carrying out risk and safety studies and industrial accident prevention work. fhhe@cowi.com, fhuhe@dtu.dk.
Jeffrey C. Nichols is Managing Partner at Industrial Fire Prevention, LLC and has been applying systems for the protection of equipment and personnel in processing industries since 1979. Mr. Nichols is a member of the NFPA 664 technical committee. Through his company, Jeff has been instrumental in bringing protection to many types of processes including drying, milling, grinding, and dust collection systems in industries handling combustible dust.JNichols@IndustrialFirePrevention.com.


Related
Study on safety
Trainer’s Corner: June 2018
Well-being: 6 ways firefighters can get better sleep
Back to Basics: Tips for proper ground ladder use