May 5, 2016, Fort McMurray, Alta. - An ever-changing, volatile situation is fraying the nerves of residents and officials alike as a massive wildfire continues to bear down on the Fort McMurray area of northern Alberta.

In the wee hours this morning, weary evacuees from Fort McMurray were sitting on buses headed for Edmonton after being forced out of their temporary shelter in nearby Anzac.

They had arrived there late Tuesday after being evacuated from their homes in Fort McMurray. By Wednesday morning, the Anzac recreational centre was a bustling hub filled with people, tables of food and rows of cots.

By that evening, it was eerily silent and empty.

Officials with the Rural Municipality of Wood Buffalo had been notified of changing weather patterns and weren't taking chances, ordering the evacuation of Anzac, Gregoire Lake Estates and Fort McMurray First Nation.

Anzac resident Bree Baumberger said her family was surprised when RCMP told them of the evacuation order Wednesday night.

''They told us to get out – it is a safety issue,'' she said. ''They just want people to have enough time and not be like Fort McMurray where all of a sudden the fire is on you.''

In another part of the community an RCMP cruiser rolled into Travis Vickrey's yard.

''Aren't you aware of the evacuation order? It's mandatory right now,'' the Mountie said. ''The fire is coming south.''

Vickrey was annoyed at the short notice as he quickly packed three cats and other belongings into the family's vehicle. They were heading to nearby Lac la Biche.

But as the province declared a state of emergency Wednesday, it was clear the situation that had forced the evacuation of 80,000 people was ''unstable,'' as Scott Long of Alberta Emergency Management told reporters.

The wildfires that had already torched 1,600 homes and other buildings in Fort McMurray continued to do damage throughout the day. Reports of homes being burned mounted, while officials advised a new school being built in one neighbourhood had been destroyed.

Residents anxious for updates on their own neighbourhoods turned to social media, prompting the writer of the municipality's official Twitter feed to issue a plea: ''I'm providing as much details as I can re: fire/neighbourhood/street ... please be patient, we're doing our absolute best.''

There was good news – the water treatment plant was saved, and Long said the downtown core was being held ''through some Herculean efforts'' of firefighters. Most importantly, there was still no indication of injury or death.

But the images being seen around the world were largely ones of devastation – scorched trucks, charred homes and telephone poles, burned out from the bottom up, hanging in the wires like little wooden crosses.

Alberta Premier Rachel Notley flew up to survey the situation first-hand, and tweeted ''heartbreaking'' pictures of the fire from above. As high as her helicopter was, she said the plumes of smoke reached even higher.

''So far, I'd have to say people have been amazing,'' she said in the evening, after a visit with evacuees at a giant Edmonton sports arena.

''They've been incredibly patient. They've followed what they've been asked to do. They're focusing on taking care of each other, their families, their neighbours.''

Blake agreed her city is strong and gave a shout-out to Slave Lake, another northern Alberta community devastated by wildfires in 2011.

''We will hope to follow in the shadow of Slave Lake in our perseverance and resolve,'' declared the mayor. ''And as we look to the future, this is still a place of incredible strength, resiliency and vibrancy.'' 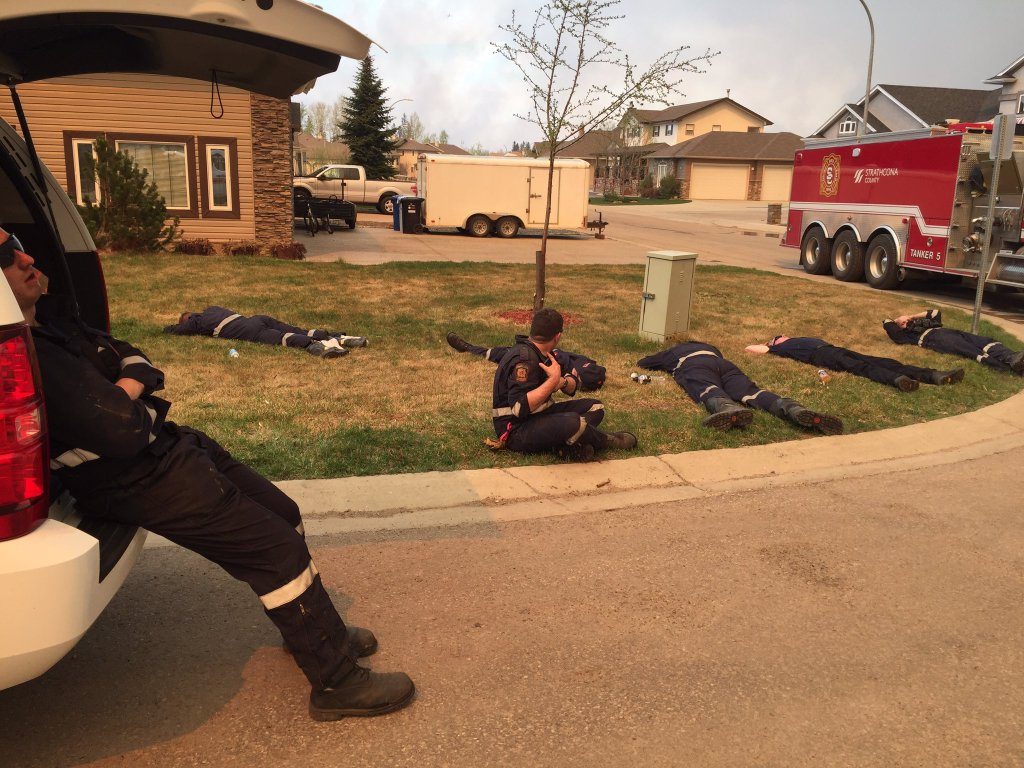 Fire crews from Strathcona take a break after hours of tackling the Fort McMurray wildfire.
Print this page