Ontario is home to the largest First Nations fire department in Canada. Fire Chief Matthew Miller, along with the rest of his department, have worked hard to bring the service up to snuff – and keep it there. 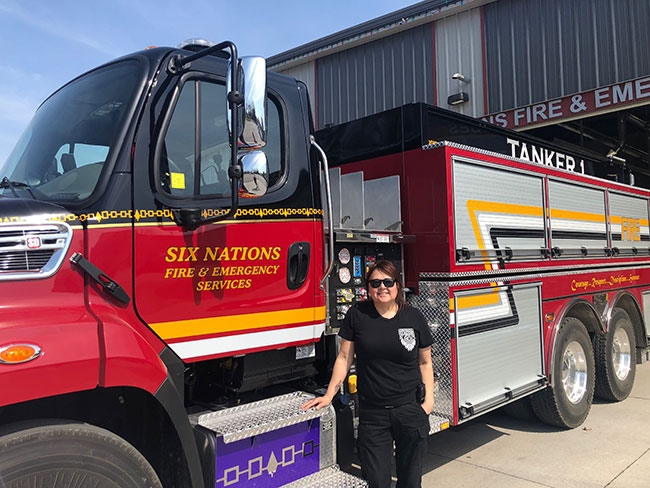 “In 2006 I came on board full-time as deputy fire chief of the Six Nations of the Grand River Territory. Mike Seth, the previous fire chief and myself knew a lot of the challenges we were facing and started the department on a process of professionalization,” said Miller. “I’ve been chief now for the last three years and the team has made a lot of progress on our journey.”

Up until the late 1960s, Six Nations did not have a fire department. Six Nations is the largest and most populated First Nations territory in Canada with more than 25,000 community members. With no active fire protection and prevention service, the community was seeing a lot of fire deaths.

“We would lose entire families and homes,” said Miller. “Finally, in 1966, Six Nations Elected Council made the decision to establish a volunteer fire department.”

The community did not have any fire service related resources of their own at the time so their initial beginnings as a fire department came from a donated fire truck and some equipment from the city of Hamilton, Ont.

Throughout the last 52 years the department has grown into the largest First Nation fire service in Canada, having recently been given a new headquarters and growing to a fleet of 14 trucks. Miller wants to take what his department has learned and help other departments, especially within First Nation communities, on their road to becoming a safer place to live.

“That’s a huge challenge that a department on a First Nation community faces and it’s all too true here on Six Nations,” said Miller. “The statistics are amplified here due to our dense population.”

Miller and his department respond to an average of two to three house fires per month, a number he says is high. Part of that figure is caused by some of the risks within the community; risks such as elderly community members living alone, accidents and even some cases of arson.

“We have grandparents living with their kids, who are living with their grandkids and their own kids too. Sometimes we have a home down here with anywhere between 12 and 22 people living in a three-bedroom home. It creates a unique, very unsafe situation for fire risks.”

The lack of smoke and carbon monoxide alarms in homes on Six Nations is another obstacle for Miller and his crew; a problem that in and of itself leads into a third problem on the territory – lack of trust stemming from intergenerational trauma. Intergenerational trauma is the transmission of historical oppression and its negative consequences across generations.

Miller wants to see 100 per cent of the homes on Six Nations with a smoke alarm, but realistically he knows 95 per cent is more likely. Right now, the community sits at around 60 per cent for smoke alarm coverage. Even though the Six Nations fire department will come to an individual’s home and install up to two smoke and car-bon monoxide alarms free of charge, some individuals decline them access to their home.

“A lot of people off the territory don’t know what intergenerational trauma is and those that do know what it is may not see how it can translate to the fire service field, especially concerning smoke alarms, but it absolutely can,” said Miller.

Miller said one example of intergenerational trauma effecting this is Canada’s part in the residential school system.

“Anyone who has background knowledge with First Nations knows that because of things like the residential school system, where kids were taken away from their communities and not allowed to speak their language or know their traditions, trust is going to be an issue. If a non-native firefighter goes up to your home and says ‘hey let me in your home so I can install a smoke alarm’ there is often trust issues that have been generationally passed on for decades. Ideally they should see the safety of their home and those inside it as more important but sometimes it’s too hard.”

Miller said that most of the team on Six Nations is from Six Nations or another nearby territory, but that it is not always the case with other communities.

■ Making progress
The Six Nations fire department saw a need for more training, but Miller said they weren’t having as easy of a time accessing it as a municipal department would because there were not enough openings in the available courses for Six Nations to keep up with what was needed. So Miller and the team sought to establish a training academy of their own. The academy has been a great success so far and Miller is excited for its growth and future.

“We started our own training academy and through different partnerships we provide accredited training at NFPA levels – most notably the 1001 level one and level two programs,” said Miller.

Miller is president of the Ontario Native Fire Fighters Society as well as a director of the Aboriginal Firefighters Association of Canada. He has visited more than 100 First Nation territories in Ontario in the past year and a half and through his consultations and meetings he and his team developed the Ontario Region First Nations Fire Protection and Strategic Plan that was designed with achievable benchmarks.

“Our plan is meant to help other First Nations fire departments become more self-sufficient and have access to the types of things we do here. The strategic plan we developed is to be viewed as a living and breathing document that can change to anything that comes up as it comes up,” said Miller, added that the plan is reviewed on an annual basis.

Despite the challenges that Miller sees daily on Six Nations, he is pleased by the level of teamwork he sees within his department and encouraged by the support he receives from other off-reserve departments. Miller doesn’t take any personal credit for the steps other departments have taken due to his suggestions; he is just proud to be a part of making communities safe.

“We’re all in partnership here. “It hasn’t been only us, I would simply say we were a part of the catalyst for working towards overcoming these challenges. Every department has their own set of challenges. There has been a lot of work that has happened in the last few years and I’m excited for what is to come.”

■ Moving forward
The team at Six Nations teaches their new recruits and regular crew – 14 full-time suppression staff and around 30 volunteers – more than just skills and what they need to know to suppress a fire. Miller teaches that communication is key to success and to not be afraid to ask for help and to create partnerships with nearby communities.

“We need to create strong partnerships with our municipal partners that are near our First Nations,” he said.

Miller also does his best to stay in the loop about new practices, techniques and equipment. He took some of his team to FDIC International in Indianapolis in April. He also went in 2017, where he learned about and recently introduced a potentially life-saving technology for his crew – personal escape systems. A personal escape system allows a firefighter to bail out of an upper-floor window in the face of a fire or to evacuate a civilian by rolling them out of a window. When used to evacuate a civilian, the system can be brought back up to the window for the firefighter to self-rescue.

“I don’t think many other departments in Canada are using this equipment yet, but I have been involved in situations already when I can see how this could save my life,” said Miller. “Because of the aggressive nature of our fire fighting services here on Six Nations and the amount of house fires we respond to, having access to a personal escape system could mean life or death to myself or anyone on my team.”

Miller and his team received training on their new personal escape systems in May from Petzl and is thankful that they now have the systems available.

Miller is thankful that he had the opportunity to include the new systems into his department and looks forward to seeing how other First Nations can benefit from initiatives similar to this.

The Six Nations fire department is working hard to challenge the statistics and make their home and other First Nation communities a safer place to live. From their humble beginnings of accepting gear and one small truck from Hamilton to now being the largest First Nations department, Six Nations has seen a lot of growth.

Although they still continue to face difficult challenges such as, housing, intergenerational trauma and distrust, Miller is hopeful for the future.

“If we want to help other First Nations communities as well as ourselves and off-reserve departments succeed we need to be prepared and ready for anything.”