Aug. 27, 2015, Redwood Meadows, Alta. – While I have been off work recovering from my heart attack I have been driving around the area a lot trying to relax, taking hundreds of pictures. Photography has always been relaxing for me and it has been a good release while getting stronger. Sometimes I go out by myself to shoot, other times I take the boys or the entire family for a drive.

During a recent drive with the family we passed by a roadside memorial. My wife Jennifer, who is a captain and EMT with Redwood Meadows Emergency Services, commented that it is hard to pass the memorial without remembering the response to the call 13 years ago for a head-on collision between a tractor-trailer and an SUV. Two local boys were in the SUV; one was dead in the back seat, and the other died shortly after a lengthy extrication by our crews. The scene was on a busy two-lane highway that runs between Calgary and Redwood Meadows. Jennifer and I travel that highway many times each week. I told her that I can still see the scene as clearly as I did the afternoon I gave the initial report.

Roadside memorials are not uncommon: families and friends place crosses, flowers and other keepsakes at crash scenes more and more often, it seems. Memorials ease some of the pain in dealing with the losses, but at what cost to our members? By no means am I suggesting that memorials should be banned because of how they affect first responders, but perhaps we need to consider how these shrines impact our members.

There are at least eight memorials along highways in our response area. I can remember each and every one of the calls. Most do not trigger memories like the one I just mentioned, or the one for a soldier who committed suicide in a Christmas Day crash in 2013. We all have calls during our service that stick with us, and there is nothing strange about remembering those we have helped, but how healthy is it to be reminded daily of certain calls? Perhaps we could move on from some of those memories if it were not for these roadside displays?

I wonder if others think about these memorials in the same way. Do they even notice displays along the sides of roads? The memorials could very well hold back first responders from moving on so it’s worth asking: do they really help others with their grief? Are those families able to move on? Should these displays have time limits imposed on their placement?

There is also an ongoing safety aspect that needs to be addressed. Many sites are very close to the roadside and can distract drivers, particularly if they are elaborate. If people who frequent the sites park roadside, there are now people in possibly dangerous positions – a recipe for further crashes.

I really do not want to seem callous. I really do care about these families and their losses, but I also need to look after our firefighters at Redwood Meadows. Public safety and roadside safety at these sites are also our responsibility. Maybe if those skis at Josh and TJ’s memorial went away I would be able to see them pumping my gas at the local pumps and not inside the SUV. 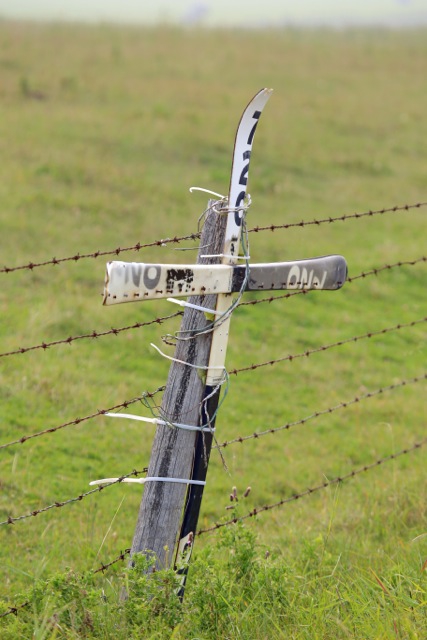 A roadside memorial that Rob Evans passes by many times each week has him evaluating the effect that these displays have on first responders. Rob Evans vividly recalls responding to a call that resulted in a roadside memorial to two boys in the community. And every time he passes that memorial
Print this page