Aug. 28, 2015, Redwood Meadows, Alta. – The pager goes off, and crews muster and respond to a serious call. Then the media shows up and starts taking pictures, shooting videos and asking questions. This can sometimes be a weekly occurrence, depending on your department’s size and the newsworthiness of any particular call on any given day.

A busy highway, or two or three, wildfires that seem to burn endlessly during dry periods, and much more can put the smallest of fire departments on the news. We do our jobs while the camera people film away. And who hasn’t tried to look busy or ignored the reporter trying to get your attention to ask a few questions? Some people do not like the media at all – actually, that seems like the biggest understatement of the year after the events of this week in Roanoke, Va., However – as I ask our firefighters – who are the first people to pick up a paper or turn on the TV after an incident at which the media was on scene? The media has a job to do and unfortunately many of the calls we respond to happen to be the hard-news stories that sell newspapers and make people tune in to their favourite television or radio stations.

Earlier this week it was the media that was in the spotlight after the horrific on-air shooting in Virginia. A morning show reporter, videographer and their interviewee were all shot at close range. The reporter and videographer died on scene, and the woman they were interviewing is reportedly in stable condition in hospital. Immediately these news gatherers became the news, big news. And from all accounts, all media is handling this incident the same as any other major news event – by gathering and reporting the information. From what I witnessed, the victims’ own station WDBJ, a CBS affiliate in Roanoke, continued with an incredible amount of poise and professionalism, not unlike how emergency services move on and gets the job done after a LODD.

Most morning shows begin their day at the same time many of us do – around 5 or 6 a.m. We watch these folks deliver information to us every morning while we drink our first coffees of the day and eat our cereal. We see them get married, have children, and, sadly for the viewers of WDBJ, in their last moments. This tragedy affects more than just those who were in the newsroom of one TV station; it also affects those who were watching live . As well, social media has given all of us means to communicate with on-air personalities in real time, and was where this senseless act was seen by so many. So yes, this tragedy is far reaching.

I don’t want to draw a bunch of parallels between this horrendous event and the LODDs that the fire service deals with so many times a year – thoughts while writing are with my media friends and acquaintances – but there is one similarity I need to mention, and that is brotherhood. There is certainly a brotherhood in journalism and the ripples are travelling across the profession right now. A local Calgary TV anchor posted to Facebook, “He was not one of us,” a statement that speaks to the feeling of brotherhood even so many kilometres away.

Think of your colleagues, keep filming our back and butts, and keep trying to get our attention, but most importantly keep gathering and delivering the news of the day because at the end of the day, we will all keep tuning in and flipping those pages. 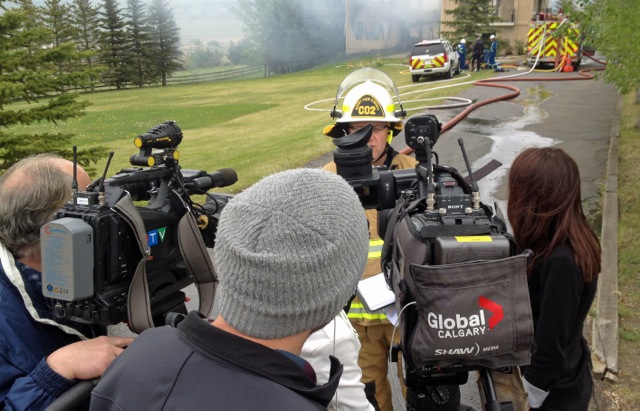