June 13, 2016, Redwood Meadows, Alta. – Where is the chief? I'm sure every fire station in Canada has heard that at least once in the past month and a half. From the Atlantic to the Pacific, many fire chiefs have been attending provincial fire chiefs association conferences, myself included.

Two weeks ago the Tsuut'ina Nation became the first First Nation to host the Alberta Fire Chiefs Association (AFCA) conference. With Redwood Meadows being on Tsuut'ina land, it only made sense for me to take vacation time from my paying job to attend the conference.

For me, spending time as a fire chief with peers from across the province and country truly is a vacation. I had not been able to attend an AFCA conference since I presented in 2014 and it was good to see friends again. It was nice to hear that challenges I face are not unique. After almost 47 years on this Earth, I have certainly learned that we all face similar roadblocks and that our support networks are what help us all down the road.

Support was a healthy topic throughout the conference as many spoke about the beast of a fire that swept through Fort McMurray in the beginning of May. Informal discussions about mutual aid, self-dispatching and the health of firefighters returning from the fire fight were just some of the things heard around the tables. Premier Rachel Notley spoke about the fire as well during her address to the crowd. Notley commended Alberta’s fire chiefs for the work they do continually protecting Albertans, and reaffirmed her government’s commitment to helping everyone recover from the devastating Fort McMurray fire. It will be interesting to see how the wildfire is dissected in order for us all to learn better ways of responding to these types of emergencies. Living in a wildland-interface community, I will be paying close attention to what is learned from this monster fire.

At a recent disaster forum I attended a speaker said: "Lessons are not learned unless they are acted upon." I truly hope that those many communities across Alberta and the country that are located close to the interface take action. As firefighters, we should be promoting the FireSmart program in our communities.

Another program that we should be promoting is Answer the Call – the volunteer firefighter recruitment program that was the brainchild of AFCA president, Camrose, Alta., Fire Chief Peter Krich. Krich was able to update conference goers about the AFCA's partnership with the Canadian Association of Fire Chiefs (CAFC) to roll out the program across the country this fall; it really is exciting that smaller departments will soon have resources to help them recruit new members in their communities. While Krich was speaking about the program to fire chiefs in Tsuut'ina, Grand Falls-Windsor, N.L., fire chief and CAFC board member Vince McKenzie delivered similar messaging in Ontario and British Columbia at four different conferences. Krich also made the trip to FDIC Atlantic in early June to promote the program.

Across the country, fire services face a lot of the same issues. One issue brought up at both the Alberta and British Columbia conferences was firefighter competencies and training. At Tsuut'ina, Alberta fire chiefs passed a resolution to begin dialogue with the province about developing minimum competencies for firefighters. In British Columbia, newly elected first vice-president of the Fire Chief's Association of British Columbia, Don Jolley, gave an update to fire chiefs about the B.C. playbook – the provincial minimum training standards for structural firefighters.

At Redwood Meadows Emergency Services (RMES), we used the B.C. playbook as a template for our own in-house firefighter competency program, but we took it even further. RMES is close to a full-service fire department with the exception of some technical-rescue skills that an all-volunteer service just cannot provide, such as dive rescue. Within the RMES rank structure, firefighters work through five classes, each with different competencies. RMES used the B.C. playbook to separate the classes, but also added references to Alberta's fire fighting "S" series courses (firefighting courses offered through Lakeland College Emergency Training Centre in Vermillion, Alta.) as well as references to the different sections of the NFPA 1001 standard. Some refining is still required and improvement will continue, but it was nice to discuss this program with AFCA first vice-president, Lac St. Anne, Alta., Fire Chief Randy Schroeder, and to offer the program for use by our provincial partners.

My great take-away from this year's AFCA conference was being able to offer my help and support, and the support of my department, toward the resolution surrounding the competencies of firefighters throughout Alberta. Not only did I get a boost, but I also realized that RMES and our members continue to improve in such a way that we are able to share our experiences to help our brothers and sisters. There really is nothing like a good fire chiefs conference to re-energize and get some focus going forward. 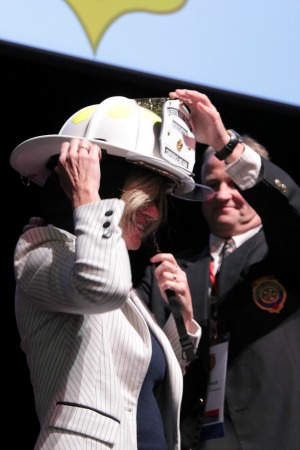 AFCA president Peter Krich presents Alberta premier Rachel Notley with a fire helmet after her address to delegates at the AFCA conference on the Tsuut'ina Nation. From the Fort McMurray wildfire response to the volunteer recruitment program Answer the Call to provincial minimum competencies for firefighters
Print this page