An innovative partnership for fire prevention and public education is paying off for this fire department in Ontario. The City of Kawartha Lakes Fire and Rescue Service had created a partnership with retired NHL defensive player Jeff Beukeboom and East Side Mario’s restaurant in Lindsay. 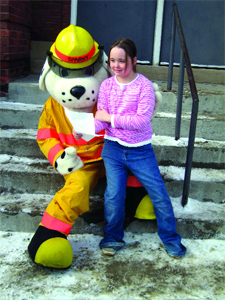 An innovative partnership for fire prevention and public education is paying off for this fire department in Ontario. The City of Kawartha Lakes Fire and Rescue Service had created a partnership with retired NHL defensive player Jeff Beukeboom and East Side Mario’s restaurant in Lindsay.

Beukeboom is owner of the local Junior A tier 2 hockey team, the Lindsay Muskies. The promotion included tickets to a Friday night Muskies hockey game as well as dinner at East Side Mario’s. Transportation to dinner and the game was provided for the winning family in a fire truck.

A contest was offered to the citizens of Kawartha Lakes to convey in 25 words or less what their family did to promote fire safety in their home. Marina Shelton of Lindsay was the winner of the fire prevention contest. Marina, a Grade 5 student at Alexandra Public School in Lindsay, submitted five things that her family does. They check smoke alarms on a regular basis, never leave a burning candle unattended, practice their home escape plan, practice kitchen safety by shutting off the stove and by always having a fire extinguisher ready for use.

On Jan. 26, Marina and her family and a couple of school friends were picked up in the rescue/pumper at their home and taken to East Side Mario’s for dinner. Afterwards, the winners were whisked away in the fire truck to the Lindsay Recreation Complex to watch the Lindsay Muskies host the Port Hope Panthers.

Sparky donned his skates and dropped the puck at centre ice for a ceremonial face-off. At the end of the first period Sparky appeared again to a standing ovation and tossed 12 Sparky Dog Puppets into the crowd. There were also five door prizes given away, compliments of the fire-rescue department.

During the stoppages in play the public address announcer broadcast fire safety messages to the hockey fans, emphasizing the need of working smoke alarms on every level by March 1, 2006, when the new Ontario regulations came into effect.

The night was a total success and well-received by the winning family and the community as a whole. It was great public relations and a positive partnership for the fire service.

Sparky on Skates could very well turn into an annual event!

The department
Kawartha Lakes Fire & Rescue Service serves an amalgamated municipality that covers 1,184 square miles. The service has 21 stations and is a composite department with three full-time and 18 volunteer stations. In 2004, its 23 full-time fire fighters and 370 volunteer fire fighters responded to 3,300 calls. The Fire Prevention Division promotes a smoke alarm program and RiskWatch as part of its public education program. Mike Hannon is a Fire Prevention Officer with Kawartha Lakes Fire Rescue.