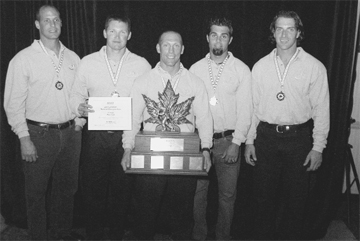 The 2004 season finished on an outstanding note with the City of Sherbrooke, Que., hosting over 400 fire fighters along with friends and family during the Canadian National FireFit Championships. Teams and individuals from all 10 provinces as well as the Yukon Territory participated in the largest nationals to date. The four days of competition took place in scenic Jacque Cartier Park, situated on a picturesque lake in the middle of the city’s downtown core. The Sherbrooke organizational committee, headed by Daniel Gingras, did an outstanding job with all agreeing that it was the best nationals ever! Not only was the venue perfect but the weather also co-operated beautifully over the four days of competition.

And competition there was! The crowds that filled the stands all four days were treated to race after race of excitement. Just when you thought a time couldn’t be beat, a new set of competitors would power through the course, stunning the crowd. Even those watching were exhausted by the end; it was hard not to get caught up in the enthusiasm of the support for the competitors with cheers of encouragement and loud rounds of applause after every race.

Defends national title
Defending his Canadian National Title, Mike Gilbert of St. Catharines, Ont., brought home the gold with a fantastic run, laying down a time of 1:19.43. Close behind, though, was Jerome Grand-Maison of Gaspe, Que., at 1:20.93 Also of Gaspe, in third, was Dwight Sinnett, running a time of 1:21.57. Rounding out the top five was Jack Bailey of Windsor, Ont., at 1:21.61 and Lance Hughes of Kitchener, Ont., at 1:22.79.

New division in 2004
One of the new divisions this year was the Women’s Over 40. The first winner of this was Darlene Acton from Ottawa, who ran a 2:51.16 – just 10ths off her personal best. Second was Ingrid Van Gelder of Vaughan and third was Liane Tessier of Halifax, N.S. We look forward to seeing this category grow. Keep it going ladies!

The Male Over 40 Division saw some amazing battles in the 2004 season. Records were set and broken across the country. It all came down to the final day of the nationals to see who would be crowned the Over 40 winner!

Christian Vezeau of the Canadian Forces Fire Marshals Team was the victor with an awesome run of 1:27.91! Malcolm Hills of Edmonton was second at 1:28.26 and in third was Jimmy Kolar of Sudbury, Ont., setting a personal best of 1:29.60. What an awesome category this is!

Another great category is the Over 50 Division. As John McGrattan of Fredericton, N.B., the defending Canadian champion says, “I’d rather be 50 and fit than 50 and fat!”  And fit he is, successfully defending his title and setting a new Canadian record of 1:46.92. Second and third place were taken by two North Atlantic Refining team members, Wayne Smith at 1:58.24 and Doug Bishop at 2:06.59. Fourth was Brian Jones of Belleville, Ont., and in fifth was Murray McCartney of the CF Fire Marshals.

The Chiefs’ Division was also a tight race with some outstanding performances. Reigning Canadian champion Christian Vezeau also defended this title with a time of 1:27.91. Mark Evans of Brampton, Ont., who earlier during the qualifying days had set a new chiefs’ record, was second with a 1:30.52. Jack Hickey from St. John’s, N.L., placed third with a 1:34.55.

During the relay competition all eyes were on Windsor, with Edmonton ready to give them a run for their money.

Talk about excitement! The crowd was on its feet cheering and chanting. The horn sounded and they were off! At the top of the tower they were neck and neck but a couple of misses on the rope by Windsor gave Edmonton the lead and with the power of this team there was no catching them! Edmonton blasted through the finish line with a 1:08.15, just inching out Gaspe who had set a time of 1:08.70 one race before. Windsor was third with a 1:11.31.

The second new category added this year was the Over 40 Division in the relay event. The response was awesome as was the competition. It came right down to the wire on this one with Brampton just inching out the boys from Thunder Bay with a 1:22.02 compared to a 1:22.23. What a great race! Third was North Atlantic Refining with a 1:35.33. Good work, gentlemen.

In the Women’s Division, it was the ladies of Vaughan who took home first with a time of 1:50.24 in the relay category and they also dominated in the women’s team with a team time of 8:01.76. Well done, ladies!

Prizes presented by Scott
FireFit’s major presenting sponsor, Scott Health & Safety, manufacturers of the new Scott NxG2, proudly presented Scott Certificates for Scott products to all the winners. These certificates totalled over $38,000. Scott’s support over the last 11 years is very much appreciated.
Our thanks go out to all the departments and their host committees and communities who hosted us in 2004, as well as all of our competitors and their families! Stay safe and be “Fitter, Faster, Stronger, FireFit!”

For a complete listing of the results, check out the FireFit web site at www.firefit.com. The 2005 schedule can also be found here. If you would like to be added to our mailing list, drop us a line with your name and address at admin@firefit.com or firefit@firefit.com. See you on the course!