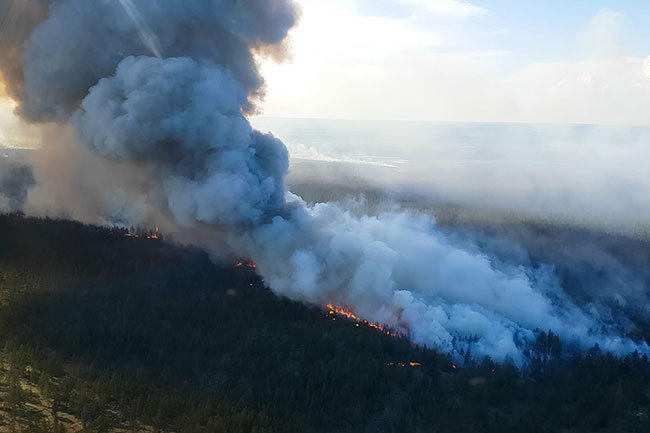 The study focused on wildfire seasons in British Columbia from 2010 to 2015. Photos by Ludmila / Adobe Stock

A recent research report from the University of British Columbia’s School of Population and Public Health found that exposure to wildfire smoke affects the body’s respiratory and cardiovascular systems almost instantly.

Researchers looked at wildfire seasons (April 1- Sept. 30) in British Columbia from 2010 to 2015. To collect and analyze the data, they used a statistical model to evaluate how ambulance dispatches, paramedic assessments and hospital admissions and diagnoses related to respiratory, circulatory and diabetic conditions with levels of fine particulate matter during wildfire seasons. This data included the date and time of the call, geographic coordinates and call reason.

The authors noted most previous studies on wildfire smoke exposure focused on 24-hour periods but, because fine particulate concentrations can vary within that timeframe, they decided to focus on a one hour timeframe. Their goal was to find out how imminent it was to address and find an appropriate and time sensitive public health response plan within the province.

A total of 676,401 ambulance dispatch calls from 500,302 individuals were included in the study. Researchers also used hospital discharge data from the British Columbia Ministry of Health for the same timeframe, which included the date of the hospital admission and the diagnosis.

Based on the results, researchers concluded found that exposure to elevated levels of fine particulate matter during wildfire seasons was associated with increased odds of ambulance dispatches related to respiratory and cardiovascular conditions. It also showed increased ambulance dispatches occurring within only one hour after exposure.

“We have long known about the harmful health effects of wildfire smoke but it’s alarming to see just how quickly fine particular matter seems to affect the respiratory and cardiovascular system, and the acute effects for people with diabetes is relatively new to us,” said lead author and University of British Columbia PhD candidate Jiayun Angela Yao in a press release.

Yao said the study also found that people with diabetes have increased odds of health complications within 48 hours following exposure to wildfire smoke, which is relatively new to scientists.

“Anyone with pre-existing heart and lung disease and diabetes is especially vulnerable and should consider purchasing air cleaners, and ensuring that they have adequate supplies of medication at home,” she said.

Researchers wrote that the effects of the study was consistent with previous scientific literature and further emphasizes the need for rapid public health actions to limit exposure to wildfire smoke. Researchers also note the findings warrant further investigation into the impact of wildfire smoke exposure on diabetic conditions.