Features Health and wellness Hot topics
Sweat it out: The best way to reduce stress buildup

Stress. Take a minute to write down what you think it is. Words such as anxiety, pressure, tension and overwhelming may spill onto your page. You’re not wrong. Indeed, these things are the very reason stress leads folks to talking to clinicians like me. Current research indicates that vigorous exercise is a top way to mitigate the cumulative effects of stress. Let’s review the stress response, and why getting your heart pumping is fundamental to stress management. 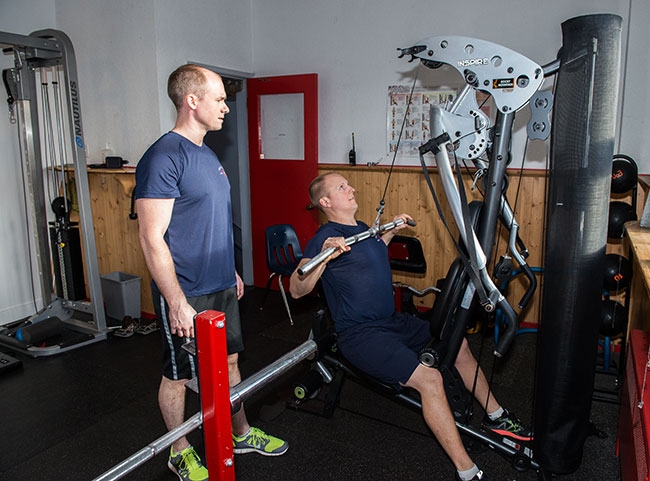 In the fire service, stress is almost a rite of passage, starting in school and continuing through the calls on the job itself. Stress can wreak havoc on the system. In a 2017 article published in Psychological Medicine, Dr. Ayman Saleh and colleagues connect early childhood trauma to significant changes in the brain, such as decreased orbitofrontal cortex ­— the brain’s “command centre” — which aids the brain’s decision-making processes as well as hippocampal volume, a structure known to be crucial in memory formation. In Why zebra’s don’t get ulcers, Robert Sapolsky also identifies several instances that hippocampus damage is done, including PTSD (indicating that the findings related more to multiple incidents, not a single incident), which have found smaller hippocampal volumes in their participants. Though, importantly, Sapolsky writes that the exact mechanism is not yet known. But, Sapolsky adds, stress is linked to neuronal damage and may “accelerate the aging of our brains.”

The above researchers suggest that excessive amounts of stress can actually change our brains. Stress research is identifying some significantly alarming results. Researchers have even linked stress to the development of cancers and a chronic pain disorder known as fibromyalgia. Stress serves a purpose, but stress that runs rampant has scary consequences.

Stress, simply, is a barrage of various chemicals into the brain. The point of this is to motivate you in a few ways. The research has expanded, but for the purposes of understanding we can keep it to the colloquialism “fight or flight”. Consider when we are presented with a very real threat. Imagine that you are on the Serengeti armed with primitive weapons, or none at all, and an embarrassing lack of clothing. The tall grass moves suddenly. You have some choices to make. Run, as you may very well become dinner. Or fight, for the threat could be your dinner coming towards you.

This ancient mechanism lies deep under the new brain matter we’ve developed since our primitive days. This is precisely why it is a difficult mechanism to control. But, the point is, and as I tell all my folks, “I would never want you to be without it.”

Stress can be good! It may feel uncomfortable in the moment, but if harnessed properly it can become an effective, motivating factor. Stress allows us to be hyper-vigilant on the fire ground. The fight or flight mechanism is one that has been developed in order to keep us alive. It’s what you feel when you get a “gut feeling” around a situation, or, what we see in moments of heroism and courage. That is stress harnessed in a positive way.

But the stress of the job has lasting impacts when not curbed. You flood the system with a chemical meant to motivate, but if you don’t “exercise” that chemical out of the system it lingers and lasts. There are a number of ways stress accumulates.

We don’t always leave the job at work or have stress-free home lives. The job will have exposure to stressful and potentially traumatic scenarios. Yet, should we return home to an unstable and stressful home environment, this down time from work does little to negate the impact experienced. Come next shift, should that home stress not be resolved, it remains packaged and active when you return back to shift. This is a cycle of destruction and as long as it continues, only increases the risk of ongoing mental wellness challenges.

We only have so much cognitive currency to battle away the demands. In a really simple example, this can be a great explaination of why some of us may develop struggles while others may not at the exact same scene: imagine two arbitrarily drawn lines. The lower is your baseline and the upper is your cognitive limit. This will vary for everyone, but rest assured we all have it. One stressful event, such as a wedding, jumps us from baseline toward the limit. Given enough protective factors and removing other stressful events, we can come back down to baseline.

Chad Taylor (above) and Ben Grantham (far left) are firefighters with the Penticton Fire Department in B.C.

If, however, you have never engaged in meaningful and effective protective activities – home life remains stressful and you are showered with the unhappy experience of multiple, stressful calls – you quickly escalate towards that cognitive limit. Cross the line, and that is where you will find folks struggling, or worse and they are found to be clinically diagnosable for a mental health disorder. Please note though, this does not necessarily mean PTSD. It can manifest as any number of issues.

To combat stress in a meaningful way, consider the whole mechanism: stress chemicals are flooded into the brain with the presence of a perceived threat and, currently, there is no active way to remove those chemicals. Therefore, they remain flooded and stress heightened, leaving the person vulnerable to more stress impacts.

By activating a high intensity, or vigorous, exercise regimen, we are allowing for the release of those chemicals in a natural way – much like we would have done back on the Serengeti. The difficulty in defining this is “vigorous” can mean a lot of things to different people – from duration of time, to intensity of movement. Trying to land somewhere in the middle, vigorous may mean a moderate duration with bouts of explosive movements.

Instituting a regime of high intensity exercise following stressful events may activate the fight or flight mechanism and eliminate these aggregate chemicals from the system. We have extensive research showing the mental wellness increasing power of exercise. For instance, a 2016 article in the academic journal Military Medicine conducted a Systematic Review of PTSD and Exercise in veterans. They concluded that exercise seems to suggest a preventative function in the future development of PTSD in members.

We also know from research that exercise is a major stress combatant. And, while we are all sick of hearing the same old adages, the mental health angle may help to bring exercise back to the forefront. Not because it is inherently good for you (though it is), but, because it could save your (psychological) life!

Exercise also becomes a preventative approach. While we certainly benefit from reactive services, we should be looking for more preventative means of protecting our firefighters. This is a proposal that only has benefits. Exercise will decrease the stress collection between our baseline and our cognitive limits. Involving oneself in such a regime can ward of immediate stress, mitigate the cumulative effect, and prolong both career and mental wellness. In short hand, increase one’s resilience.

In modern fire departments, we need a holistic approach to the mental wellness of our folks and by instituting the ability to engage in high intensity outlets following a perceived stressful call we may, in fact, protect our firefighters against the negative effects of job-related calls. Stress was meant to protect you. With a little forethought and some slight program changes, we can continue to experience stress in this protective manner.

As is the case in science, we cannot conclude definitively, due to the lack of research done specifically in these realms and with our population specifically. Science is in the business of, as physicist Lawrence Krauss says, “proving things wrong, not proving things right.”

There is, however, one important caveat.Cumulative stress might be battled with exercise, but  it  looks  like you have to start early.
While commonplace ideas suggest the simple A-B relationship ­— increased exercise equals decreased health problems ­— the mitigating effect tends to disappear at high rates of stressful life events, suggests a 2014 study. While there isn’t enough to make a hard case on either side, exercise, it seems, is paramount to both prevention and in some cases, intervention with issues of cumulative stress.

Nick Halmasy is a registered psychotherapist who spent a decade in the fire service. He is the founder of After the Call, an organization that provides first-responders with mental-health information. Contact him at nhalmasy@afterthecall.org.