When I was CEO of the country’s two largest homebuilding industry associations – first in Toronto, then Vancouver – part of my job was to meet regularly with mayors, councillors and senior building officials. 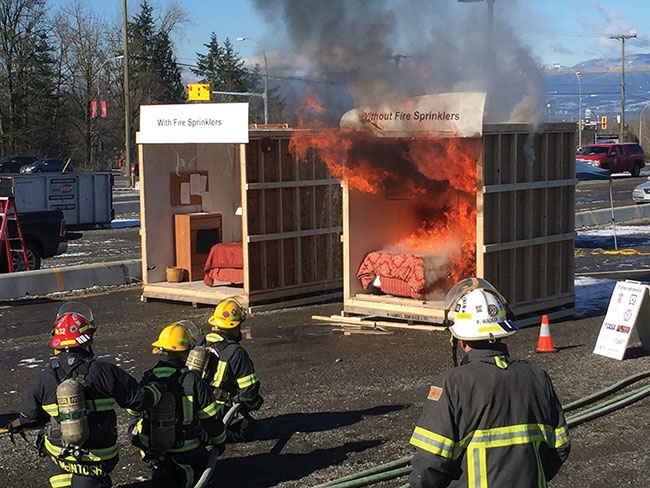 An exercise was conducted at the Home and Family Sprinkler Summit in Langley When Peter Simpson was CEO of the country’s two largest homebuilding industry associations he was against requiring sprinklers in new homes. Now that he’s a firefighter

If the issue of including automatic fire sprinklers in one- and two-family dwellings and manufactured homes surfaced, I would attend council meetings and butt heads with senior fire officials who supported sprinklers.

I expressed the long-held industry position that requiring sprinklers in new homes imposed an unnecessary financial burden on builders and homebuyers, and a smoke alarm was the only effective life-safety device.

Never did I – nor anyone who knows me, for that matter – ever imagine me writing this next sentence: Automatic fire sprinkler systems save lives, protect property and preserve the environment.

What changed my mind on this issue was a simple change of lifestyle. Upon retirement, my wife and I moved to Nova Scotia’s South Shore, where I looked for something meaningful to occupy my free time.

In September 2013, I joined the Dayspring & District Fire Department as a raw rookie, and took advantage of every opportunity to develop knowledge and skills as a firefighter and medical first responder, both in the classroom and during practical and often rigorous hands-on training sessions.

At the time of this writing, I have participated at more than 480 emergency scenes. I realize that’s a small number compared to the emergencies career firefighters would deal with during the same period, but it’s a lot for a guy who wore a suit to the office every day, and once thought the letters SCBA stood for South Carolina Builders’ Association.

During my short time with the fire service I have grown to appreciate the firefighters’ dedication, expertise and service to their communities, at all hours of the day and night, and during all weather conditions.

Returning to the fire hall following a challenging structure fire can be a sombre experience, a real eye-opener for me. Invariably, my fellow firefighters sit silent, exhausted, sweaty, dirty, some with their heads bowed.

I am truly in awe of their fire-ground skills, professionalism, camaraderie and willingness to put themselves at risk to help people they don’t even know. That’s a commitment most folks don’t fully understand.

I explained to attendees at the two well-attended events how the transition from building industry executive to firefighter and medical first responder had significantly influenced my position on sprinklers.

We live in a technologically advanced world, where the pace of change over the past decade or so is far greater than all the changes that occurred in the past half century. It seems every day the world is introduced to something new, more efficient, or way cooler than yesterday.

Yet a cost-effective system designed to save lives and protect property, and whose technology, appearance and performance are continually refined, still has its naysayers. Frankly, it boggles the mind.

There have been many changes in how homes are built. Modern construction, and the contents of homes today, include many synthetic materials, vinyls, glues, resins, laminates and the like.

Incident commanders are understandably hesitant to send firefighters onto a roof if fire has reached the attic. Metal gussets often separate from trusses, leaving roofs unstable and dangerous.

Homes in today’s small-lot subdivisions are sited closely together. Flames can easily jump from one structure to the next.

Likely all readers of this magazine are chillingly familiar with flashover, a condition where a fire’s energy is suddenly radiated back to a room’s contents to produce a rapid rise in temperature and simultaneous ignition, an indication that the fire has grown to its fully developed stage.

Well, 20 years ago, flashover occurred in about 21 minutes. In today’s new homes, flashover can occur in under three minutes. And loss of life can occur well before that stage in the fire’s progression.

So, time is crucial. A home protected by an automatic sprinkler system is like having a firefighter on scene, knocking down the fire, before the first truck has even left the fire hall. Typical response time for a suppression crew is about 10 minutes, whereas a sprinkler head can extinguish a fire in under 90 seconds.

Sprinklers do not eliminate firefighters, who must respond to every fire call, sprinklers or no sprinklers. However, firefighters face a much safer environment when they arrive at a structure where sprinklers have been activated. And, family photos and heirlooms might be wet, but not lost forever in a fully involved fire.

Recent findings from the National Fire Protection Association (NFPA) underscore how sprinklers can reduce the risk of death or injury from fire.

A wealth of Canadian research is also available, including compelling reports co-authored by Surrey Fire Chief Len Garis. The Canadian Association of Fire Chiefs, led this year by Edmonton Fire Chief Ken Block, also offers data in support of sprinklers. So, of course, does the Canadian Automatic Sprinkler Association.

Those in the fire service know the value of demonstrating side-by-side burns. One module contains no sprinkler, while the other, built with exactly the same fire load, is equipped with a solitary sprinkler head.

I witnessed my first demo at the Home and Family Sprinkler Summit in Langley, B.C. A suppression crew with a charged line was in position while the unprotected module was set ablaze. Five minutes later the crew knocked down the flames. The temperature in that module reached 800 degrees centigrade before the fire was extinguished.

Ninety seconds after the second module was set on fire, the sprinkler head had done its job. The temperature in the sprinkler-protected module reached only 40 degrees centigrade. You can’t argue with science.

Homebuilders deal with a wide range of development charges, levies, fees and taxes imposed by all levels of government. Municipalities can help to mitigate the additional cost of sprinklers by finding cost efficiencies in current development and building requirements, or offer other incentives to builders.

Education and awareness are key to spreading the word about the benefits of a sprinkler system.

A prominent Vancouver-area builder and long-time friend was forced by municipal regulation to install sprinkler systems in his homes. He grumbled about how the extra cost would affect his sales.

When the bylaw came into effect, rather than fretting about it, the builder amended his marketing strategy.

A savvy businessman whose company has won numerous national and international housing awards, he seized the opportunity to market sprinklers as an included safety feature in all his homes, and ensured his sales staff understood how sprinklers worked and how to promote them to prospective homebuyers.

On his extensive feature summary is a section entitled, “Safe and Sound.” Right at the top of the list of 12 highlighted safety features is “fully sprinklered fire-protection system.”

Why can’t more builders be as proactive? And, buyers need to look beyond the granite countertops, coffered ceilings and Shaker cabinets and realize sprinkler systems might one day save their lives and the lives of their children. Three thousand dollars for a sprinkler system (single-detached dwelling) buys a lot of peace of mind.

Sadly, a year ago, four structure fires on the South Shore resulted in the deaths of seven people, including four young children. Since then there have been 16 more deaths in Nova Scotia, including eight children.

Enough is enough. Individuals and organizations with skin in the game on this issue need to engage in meaningful dialogue on the science-proved, life-saving advantages of automatic fire sprinklers.

We owe it to families who have lost precious loved ones in house fires, and to the dedicated firefighters who don’t give a second thought to placing themselves at risk in the service of their communities.

As President and CEO of the Greater Vancouver Home Builders’ Association, Peter Simpson lobbied municipal politicians to resist mandating fire sprinklers in new homes. Now retired and a firefighter and medical first responder in rural Nova Scotia, Peter has become an advocate for sprinklers. Contact him at peter_simpson@hotmail.com.