September 2015 - The wildland/urban interface is a tricky area as it encompasses forested areas and the urban sprawl.

In Alberta, we are lucky to have a state-of-the-art wildland training centre in Hinton. We are also lucky to have many qualified schools, and fire departments that provide instruction to become NFPA 1001 structural firefighters.

All agencies try to tackle the wildland/urban interface problem with some type of training – NFPA 1051 (wildland) or Environment and Sustainable Resource Development (ESRD) S-215 sprinkler training – which is tough, because no agency focuses solely on structural protection during wildfires.

I can say from the experience that we had in May 2011 when 40 per cent of our town was burned by wildfires and another 45 homes lost in the surrounding area, that we were unprepared.

I have spoken across Canada about what happened that day, and in the years since. I like to think that our regional fire department has done phenomenal work to try to get ourselves to a new standard. I am not saying we are the best, or that we are the only ones who can do it. What I’m trying to say is that there is a need, and firefighters from both wildland and structural departments are trying hard to fill that need.

The solution, as I see it, is simple: get firefighters from both sides, who are already the best at what they do, and bridge the training between wildland fire fighting and structural fire fighting. (Let’s call it cross training.)

As I stared at 12 Avenue SE in Slave Lake while 35 houses, dozens of campers, and even more vehicles burned around me, I remember two distinct thoughts: 1. We were never taught to expect anything like this. 2. I will do my best to make sure nothing like this ever happens again. These thoughts were later joined by another: this happened in Kelowna in 2003, why didn’t we all learn from that?

Since 2011 the Lesser Slave Regional Fire Service has been involved in several projects to better train our firefighters and make our community safer.

The government of Alberta spent $20 million in and around our community to FireSmart the area and make it safer for the future. I can tell you from the grey hair and stress that this has been no easy feat, but I will also say it had to be done, and the pressure to provide accountability was immense.

Within each discipline there were dozens of projects, committees, meetings and discussions. After four years I can also tell you that I could not be more proud of our government here in Alberta, our municipalities, and all of the people and agencies that came together. Is the FireSmart project done? No. But I will say that we are headed in the right direction, with the right people, equipment and knowledge. We have tried very hard to share what we have learned and to engage new agencies along the way.

Which brings me to this 2015 wildland fire season. It doesn’t take long looking at news articles to recognize that this wildland season has been a bad one, and, as I write this on July 27, I understand that it is a long way from over. We have a young team of fire-service professionals here that was custom built after the 2011 fires, as part of the FireSmart program. This FireSmart crew is trained in all aspects of the fire world including wildland fire fighting, NFPA 1001 structural fire fighting, 1002 aerial ops, 472 dangerous goods, Emergency medical responder, S-215 structural protection, search and rescue, basic fire safety codes officer, technical rescue, ICS 200, emergency preparedness and chainsaw faller certification.

At first glance I always get the comment, “These guys are over trained!” That couldn’t be farther from the truth. It has taken all these courses and more, combined with practical, hands-on experience to get our firefighters to a level that allows them complete access to all fires and emergency incidents. We use this crew to train our other full-time, part-time and volunteer firefighters. We use this crew as a first-up team to deploy to all types of incidents in our area and throughout Alberta. This team is our connection to dozens of agencies that make up our regional protective-services team.

Since 2011, this team has deployed to 11 separate large-scale incidents in Alberta. We have worked from High River in the south to High Level in the north, trying to pay forward all the help that people sent us in our time of need. We work very closely with Alberta Environment Sustainable Resources Development to supply this crew as a helicopter attack crew, and to do structure-protection deployments for ESRD.

Working closely with ESRD has given us training, experience and insight that we could not have amassed on our own. This FireSmart crew has led all of our firefighters to new levels of success; this year we have done five deployments, with 40 different firefighters from our region, helping other communities protect their citizens. We have learned a ton at each deployment, and I hope that we have spread some of our knowledge.

Everywhere we go our firefighters know that the message is simple: work together, help the people, put your ego in your pocket. This might sound simple but egos and personalities can jeopardize any well-meaning operation. We were very lucky to be called on to assist the Wabasca Fire Department and the Bigstone Fire Department in the Wabasca area north of Slave Lake to protect both of these areas from a wildfire that was just a few kilometres from homes. Thousands of people were evacuated and we were part of a privileged team of structure firefighters, wildland firefighters, RCMP, EMS, and emergency management/municipal/First Nations people who stayed behind to protect the homes. We worked hand in hand, all firefighters, forestry personnel, and emergency agencies.

While all of this was going on we had a fire two kilometres from residences just outside of Slave Lake in Municipal District 124. This fire caused the evacuation of dozens of people and crews had to get in there and provide structure protection to nine homes.

Our FireSmart crew was excited to be able to help such hardworking, dedicated firefighters. The crews worked together and accomplished the job while bombers flew over, and helicopters bucketed, and wildland firefighters fought fire just 500 metres from their location. Fire Chief Rodney Schmidt asked us to send a few more firefighters and some trucks to help with the fight. Three days in, we sent more people and more equipment to join High Level, Peace River, Grande Prairie County, Greenview County and Fort Vermillion firefighters. We all trained together, we all learned from each other, and we all were given the opportunity to help protect the citizens in the area.

This firefighting operation was headed by the dedicated professionals with ESRD, in this vast area – three complexes under the management of an area team (a first for me for sure). The daily work keeping hundreds of people, dozens of aircraft and dozens of pieces of heavy equipment all under control within the ICS model was amazing. ESRD’s team pushed through the chaotic days and nights in some of the worst forest-fire conditions on record.

During this High Level deployment, a group of firefighters from many towns and First Nations was sent to the Tall Cree Reserve about 120 kilometres from High Level to do structure protection of 39 homes on the north reserve, while 144 people were evacuated. The First Nation firefighters were very gracious and allowed us the use of their fire hall and then their main office as a bunkhouse. There were scary times as the fire sped toward the mixed team of firefighters. Bombers, helicopters and wildland firefighters did the daily battle with the fire to keep it away from all the structures. No homes were lost and no one was injured. Another reserve, at Meandering River, was on standby; this community started its preparation and crews attended the reserve to make an attack plan and do a structure-protection plan. Luckily the wildland firefighters were able to keep this fire away from the community.

On the long drive home we watched as fire columns spotted the skies around our area and wondered when the next fire would need us. It came as little surprise when a fire 30 kilometres north of Slave Lake threatened a wildland campus owned by our local college. Wildland firefighters were waging war against this fire that was burning in conditions and had fire behaviour unlike any other season.

On the way to this fire we drove through the wildland fire to get to cabins while the ESRD wildland firefighters were doing structure protection on remote sites to the north. Eventually we also worked together to sprinkler a camp, and as per our unusual bad luck, a helicopter crashed close by while we were on site. (The pilot was saved by another pilot and engineer; he had a concussion and broken jaw but, fortunately, survived the experience.)

This was the end of a very, very long spring and early summer: our first prescribed burn was March 29 and this fire finished up for us on July 21.

I have seen firsthand how well all emergency service groups, governments and citizens can work together. I am proud to have been a part of this unforgettable year. I have also watched in horror as thousands of people were evacuated while emergency workers from all types of groups fought to save their homes in Saskatchewan, British Columbia and other areas of Alberta. We have been able to work with firefighters from Alberta, Ontario, Idaho, Australia, New Zealand and South Africa this fire season. We have the privilege of working in many areas with many groups, all of whom did an unbelievable job of protecting communities and extinguishing wildland fires.

In our area, we are trying to do a better job moving forward. We have plans to train more people, expand our training centre and share our knowledge with all who will take it.  We strive to improve ourselves, and to absorb as much as we can while we continue the war on fires. Continued work with all emergency and government groups, and First Nations, will only add to our region’s abilities. As always, I hope people will read this, share their stories and get out of their comfort zones to become bigger participants in the emergency world. Don’t wait for them to come to you – go to them first.

Jamie Coutts is the fire chief of Lesser Slave Regional Fire Service. Contact him at jamie@slavelake.ca 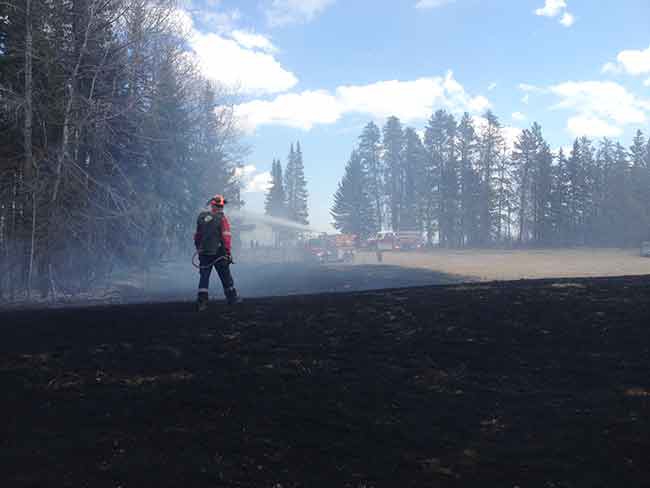