A casual question from a colleague could eventually lead to changes to the no-stopping zones around fire hydrants in British Columbia, underscoring the importance of taking a second look at long-held practices.

The no-stopping zones around hydrants are a significant issue in urban areas, where space for parking is at a premium. In most jurisdictions, it is illegal to park a vehicle within a certain distance of a hydrant, to ensure it is visible and accessible during emergencies. Across North America, this distance is typically three to five metres (or about 10 to 16 feet).

British Columbia is at the top end of the range. Chapter 318, Section 189 of the BC Motor Vehicle Act (RSBC 1996) prohibits vehicles from stopping within five metres (about 16 feet) of a hydrant. Municipalities mirror this distance in their bylaws to prevent conflict with provincial regulations. The result is 10 metres – more than 32 feet – of unused road space around every hydrant.

But is that much space required? This was what Fraser Smith, the City of Surrey’s general manager of engineering asked of Surrey Fire Chief Len Garis in 2016. This question resulted in a study on the issue by the University of the Fraser Valley (UFV), written by Garis (an adjunct professor at UFV) along with Surrey Fire Service Deputy Fire Chief John Lehmann and strategic planning analyst Alex Tyakoff.

“Providing on-street parking is critical to the success of neighbourhood densification in communities. As we accommodate residential growth through townhouse and apartment developments providing one or two additional parking spaces next to each fire hydrant will be greatly appreciated by our residents. In a growing neighbourhood the total increase in parking spaces could be very meaningful,” said Smith.

To prepare for the study, titled The Reduction of Parking Restrictions around Fire Hydrants: An Examination of Parking Distances and Setback Regulations, Surrey Fire Service conducted a series of evaluations to determine the impact of reducing how far away vehicles could park from hydrants. Of specific concern was the potential to impede the flow through the four-inch supply lines running off the hydrant side ports. The study also looked at potential damage to vehicles parked next to hydrants.

The testing included simulations of crews arriving on the scene in an engine, stopping at a hydrant and removing the equipment and hose before sending the truck further down the road. This simulated a “forward lay” tactic, where water uses existing head pressure to make its way to the engine at the fire scene. A baseline flow of 250 gallons per minute was used to measure any reduction of flow through kinking of hose lines at corners.

In the end, the testing showed vehicles could park as close as two metres from hydrants – less than half of the current requirements – without affecting visibility and access.

This conclusion is supported by the National Fire Protection Association hydrant clearance standard, which recommends 60 inches (five feet) of clearance on either side of a hydrant with a connection diameter greater than 2.5 inches. This standard was updated in 2015 and provides for three times less parking clearance than is permitted in B.C.

Given the results of the testing and the widely recognized NFPA standard, the study concludes that a no-stopping zone of 2.5 metres (8.2 feet) on either side of a hydrant would not affect fire fighting operations or public safety while allowing for additional street parking.

Why does the province require so much parking clearance? If the reason was to ensure emergency responders could easily spot hydrants, that is no longer valid, given today’s widespread use of GPS, CAD maps in fire trucks and other technology, not to mention the drivers’ awareness of hydrant locations.

If the reason was to ensure firefighters have adequate access to hydrants, that rationale is also not sound. Fire apparatus rarely, if ever, pull up right next to the curb at fire hydrants; the practice instead is to block travelling lanes as necessary.

Whatever the original justification, the matter is being brought to the attention of B.C.’s provincial government. Smith took the study to Metro Vancouver’s Regional Engineers Advisory Committee (REAC), which crafted a resolution requesting that Section 189 of B.C.’s Motor Vehicle Act be amended to permit municipalities to limit the no-stopping zones near hydrants to 2.5 metres on either side, measured from the point in the curb or road edge closest to the hydrant.

The resolution was supported unanimously at the 2017 annual general meeting of the Fire Chiefs’ Association of British Columbia, and has been provided to city managers to strengthen the position with the provincial government.

The amendment would enable B.C.’s local governments to update their bylaws and free up additional parking spaces — a boon for urban and growing communities — while having no negative impact on fire operations.

Ultimately, it is important to remember that the recommended change was the result of a simple query about why we do things a certain way. These types of questions are often dismissed. However, in this case, making the effort to thoroughly explore that question could result in a significant improvement for B.C. cities while also demonstrating how the fire service continues to be responsive to the changing needs of the communities they serve.

The Reduction of Parking Restrictions around Fire Hydrants: An Examination of Parking Distances and Setback Regulations can be downloaded for free by searching “hydrant” at http://cjr.ufv.ca.

Len Garis is the fire chief for the City of Surrey, B,C., an adjunct professor in the School of Criminology and Criminal Justice and an associate to the Centre for Social Research at the University of the Fraser Valley, a member of the Affiliated Research Faculty at John Jay College of Criminal Justice in New York, and a faculty member of the Institute of Canadian Urban Research Studies at Simon Fraser University. Contact him at LWGaris@surrey.ca

John Lehmann is a deputy fire chief for the City of Surrey, B.C. He has 25 years’ experience, is certified as a fire officer IV and is the chief training officer with the Surrey Fire Service. Contact him at JLehmann@surrey.ca

Alex Tyakoff is the strategic planning analyst for the City of Surrey Fire Service, B.C., with 25 years’ of experience in public safety research. He possesses a master of science (MSc) degree in urban and regional planning from the University of British Columbia. Contact him at Atyakoff@surrey.ca 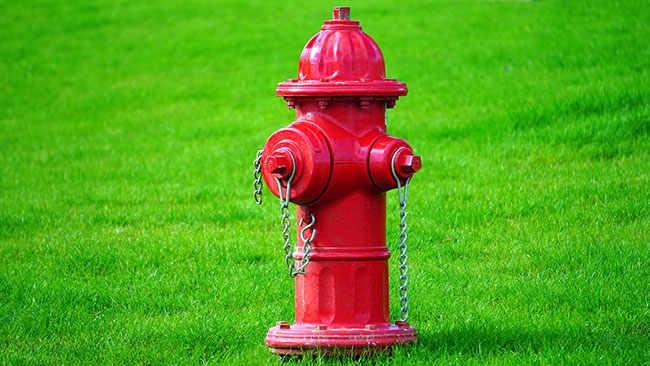 The BC Motor Vehicle Act prohibits vehicles from stopping within five metres (about 16 feet) of a hydrant. Len Garis
Print this page