Wildfires can, and have, happened at any time of the year, but there is something special about the middle of May in northern Alberta. For those involved, the Redwater, Newbrook, Opal or Grassland fires were big deals, but the Slave Lake fire in 2011 made everyone sit up and take notice. While we hope we never have to face a fire that destructive, those other fires tell us that while the impact to Slave Lake was unique, in Alberta we had better be prepared for May wildfires. 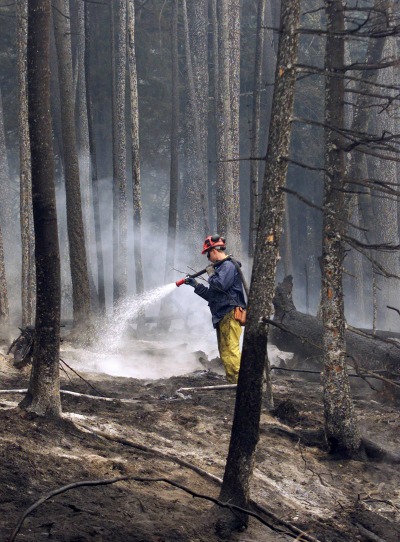 For those not in northern Alberta, it is worth considering just how your conditions vary, and applying similar preparatory steps. As firefighters we should be the last ones to be fooled into complacency by thinking it can’t happen to us.

The wildland fire behaviour triangle tells us that wildland fires are largely influenced by the interaction of topography, weather and fuel. While topography must always be considered and can have immense local impact, it really does not contribute to the phenomena of these May wildfires, so we’ll put that aside.

There are two weather conditions that are part of the equation. The first is crossover – when the temperature in degrees Celsius is more than the relative humidity expressed as a percentage. This is an easy indicator to follow. You don’t need an understanding of the complex (but very useful) Canadian Forest Fire Behaviour System to figure this out. Just check your local Environment Canada website forecast, where temperature and humidity is shown. If you have, or are approaching, crossover conditions, you will have easy ignition of fine fuels and the potential for rapid fire spread.

The second weather condition is high wind. Even with crossover conditions, without wind (or slope), any fire is unlikely to spread very fast and does not normally present a great suppression challenge. Add wind to the crossover conditions and things get more interesting. The windier it is, the more interesting things become. Firefighters don’t need to be meteorological experts, or even understand why wind spreads the fire so rapidly, we just need to know it does. We can refer to that same Environment Canada forecast for predicted winds, and of course keep an eye on the flags and observe current conditions.

Now let’s look at the fuel side of the equation. Mature conifer forest in northern Alberta, as with most of the boreal forest, are black spruce or jack pine. At their driest in May, these fuels have the greatest crown fuel load and can support active crown fire. These fires can be intense and with wind spread rapidly; they produce a lot of radiant heat and can put out a lot of firebrands, both of which can transfer wildland fire to urban fuels such as landscaping, outbuildings and houses.

Of the two species, black spruce has been identified as particularly threatening. Black spruce more often has continuous branching from ground to crown, providing its own ladder fuel to spread a surface fire to a crown fire. Compared to jack pine, black spruce has smaller needles and more of them, as well as finer and denser twigs and branches. This greater surface area allows for easier ignition and spread. These finer branches, as well as much lighter black spruce cones, are likely to produce more firebrands that can cause spot fires.

Conifer fuel is not seasonal and it can be dry and windy any time of year, so what is it about May fires? That brings us to the two other main fuel types found in the north – grass and trembling aspen.

Dead dry grass is described as a fine and flashy fuel. Because it is so fine, it has a huge surface area and as a result quickly absorbs and loses moisture. Crossover conditions will quickly dry out dead grass; when grass is dry it ignites easily and with wind fire will spread rapidly. Certainly we can have grass fires in April or even March, but because of the shorter, cooler days and lingering snow, these fires are usually much less intense. Once June rolls around we usually get more rain, but the new green grass also emerges and does not shed moisture or carry fire like dead grass.

Grass fuels are usually associated with open wetlands or human-altered landscapes such as pastures, roadsides or industrial clearings. These grassy areas are often frequented by residents, workers or recreationists and contain transportation and utility infrastructure – the human causes of wildfire ignition.

In a sense, trembling aspen fuel behaves like a more subdued grass fuel. Often there is grass beneath the aspen, but with less light, not as much as there is out in the open. Combined with the dead leaves from the previous year, this makes up most of the surface fuel in these deciduous forests. With no green leaves on the aspen, sunlight and wind reach the forest floor, warming and drying it, creating conditions that will carry surface fire. Once the aspen leaf out (in late May, early June) the forest floor receives little sunlight and less wind, so does not dry out and warm up as much. Combined with greened-up understory fuels, the likelihood and intensity of fire in these forests is greatly reduced.

Now let’s put these fuels together on the landscape and consider the fire potential. While the forest may be a patchwork or mosaic of conifer, aspen and grass fuels, in May we find a unique continuity of fuel. Dry grass fuels will easily ignite and carry fire to the forest where aspen fuels will sustain the fire in a manner not seen at other times of the year, allowing it to reach conifer fuels that may crown and run.

To summarize, in May dry, windy weather can spread fire from easily ignited grass fuels through forested areas including aspen fuels that will not burn so readily at other times. When these fires involve mature conifer fuels, the resulting crown fires can be uncontrollable and produce an intensity of heat and firebrands that can spread fire from the wildland to urban areas.

A firefighter hoses down hot spots around Hillcrest

Preparation
As a municipality, small or otherwise, how do you prepare for the possibility of a destructive wildfire entering your community? In Canada there is a coalition called Partners in Protection that promotes a program called FireSmart. This program provides advice and direction to help fire departments and residents plan for wildfire in and around your community. Whether your department addresses this planning itself or in co-operation with provincial wildfire officials and/or consultants, you should take advantage of this program. Without getting into great detail, let’s look at some of the components a community fire plan should include.

First you need to assess the threat. Often fuel is the most influential factor that is constant enough to predict and manage. Do you have large grassy areas adjacent to homes? Is the grass maintained through mowing or grazing, resulting in a fuel break? Or is it long and matted by the winter snowpack, creating a fuel hazard, acting as a bridge or wick between other fuels? Do you have mature conifer forests such as jack pine or black spruce adjacent to communities? How extensive or continuous are these areas?

If you have identified a fuel threat you should consider fuel modification. For grass fuels, this might involve prescribed burns in the spring, something many firefighters enjoy but others refuse to consider due to risk and liability. Mowing might be a better option and may involve enforcing community standard bylaws. Mature conifer fuels are more of a challenge, but there are options. Thinning these trees and removing the thinned material can maintain forest cover while greatly reducing the risk of a continuous crown fire – the crowns are too far apart for fire to spread from crown to crown. Pruning lower branches can reduce the risk of fire spreading from the surface to the crowns. Fire guards can create a break in the fuel as well as provide access for quick initial attack of fires. While more drastic, forests can be converted from conifer to deciduous species, or removed altogether. After an experience like Slave Lake, it is tempting to say “Just remove that forest,” but we have to remember that many people choose to live in these locations because that forest is there.

Proactive steps can be taken to reduce the hazard from wildfire during the planning process. Improved access, as opposed to one road in and out of a subdivision, and additional water sources, can improve the fire department’s ability to respond during a large-scale incident. Greenbelts such as parks or golf courses can be used to separate homes from mature conifer fuels.

Certainly residents can play a large role to protect their properties. In addition to fuel modification, maintaining property and choices about building materials can influence the impact of wildfire. Municipalities can take an educational and advisory role in helping their residents help themselves; the Firesmart program has excellent material for this.

Fire departments should train to prepare themselves for these fires. Some kind of basic wildland fire training should take place, such as NFPA 1051. A popular course in Alberta is S215, Fire Operations in the Wildland /Urban Interface. This two-day course introduces some new strategies and tactics such as structural triage, structure and site preparation and unique engine operations for the wildland/urban interface. It is offered by Alberta Environment and Sustainable Resource Development to Alberta municipal fire departments at no cost. Dozer Boss courses and sprinkler training are other useful cross training to consider.

Training should not be limited to emergency response personnel – or perhaps rather who is defined as such should be expanded. Do senior municipal staff and elected officials have adequate incident command system training? Is your municipal disaster plan familiar and practiced?

Most municipal fire departments can’t just increase staffing for potential busy periods. If you have found May historically busy, or your assessment has identified a significant threat from spring wildfire, there are some steps you can take. Anticipating a need can be incorporated into your holiday planning, just as volunteer departments try to maintain adequate coverage over a long weekend. Make sure you have updated contact information for heavy equipment and helicopter charters, or, if applicable, standing contracts or agreements in place. You can schedule wildland fire training for March or April so it is fresh. And again, monitor the weather – if at no other time, then do so when it’s hot and dry in the spring. If you want a forecast that includes humidity and is catered specific to wildland fire, then check out Alberta Environment and Sustainable Resource Development’s website, or that of your provincial wildfire agency. If you get in the habit of doing this you may soon be able to see the correlation between weather and fire behaviour on smaller fires – experience that will serve you well on the bigger fires.

May wildfires in Alberta are a reality that municipalities have to face. In fire fighting there are no certain outcomes, but better understanding the spring wildfire phenomenon and taking reasonable steps to prepare for it will put us in a better place to protect our communities.