Features
The economics of apparatus

From inflation to the supply chain: Challenges in 2022 and beyond

The pandemic is still with us, but news of its death toll has been supplanted by the reverberations of its aftershocks. Supply chain disruptions. Inflation. Labour shortages. An expected recession. All these factors have created several challenges for fire truck manufacturers and dealers. Fire chiefs, procurement committees and others with input into buying a municipality’s next apparatus should be aware of the impacts rippling into the purchasing and planning environment.

MacKay is a mechanical engineer by trade with a decades-long career in trucks. Of all the wheels on the road, he said fire trucks have the most complexity and technology. Aging exponentially increases the cost of keeping them current and operational, particularly when it comes to aerials.

This means most departments should be trading in their apparatus sooner rather than later, he said. The economics and life cycle cost analysis, which is well known in fleet services, shows this. The faster trade-in cycles are reinforced by higher market prices for newer used fire apparatus. Supply and demand underpin the market.

“The supply and demand of fire apparatus, like most trucks in North America, is out of whack,” said MacKay. “Demand for all trucks, not just fire trucks, is far outpacing the industry’s manufacturing ability. Raw materials and finished material supply chain delays, along with labour shortages, are preventing the truck manufacturers from ramping up production and meeting their production costs.”

This imbalance has set truck delivery backlogs at two to three years, he said, with North American truck manufacturers having pre-sold most, if not all 2023 and 2024 production slots, leaving a hesitancy to take orders into 2025 due to inflation and cost control concerns.

“The difficulty faced by the industry is that the input costs of truck manufacturers are rising even faster than record-breaking inflation. Raw and finished materials used to manufacture fire apparatus have increased by 15 to 30 per cent and up in the last two years. Some input costs, like shipping materials, are up as much as 50 per cent over pre-pandemic times.”

These echoes of the pandemic were heard via lockdowns at the port in Shanghai that caused mass delays and congestion. In May, daily operations were 95 per cent back to normal, but backlog and disruptions from factories will continue to cause congestion this year, reported Bloomberg News, adding that a cargo backlog equal to 260,000 twenty-foot containers failed to ship in April because of a lockdown. Lockdowns in China matter to the automotive industry worldwide and things have not completely settled yet.

In addition to the battle of supply and demand versus supply chain, inflation took off like a jet, rising to 8.1 per cent in June, then descending over two months to 7 per cent. Prior to 2020, inflation was 2.2 per cent. This fell below zero during lockdowns. It started to trend up in 2021. TD Bank’s quarterly economic forecast for Canada predicts a return to 2.6 per cent by the end of 2023.

This October, Tiff Macklem, the Bank of Canada’s governor, spoke to the Halifax Chamber of Commerce about the consumer price index inflation. His key takeaways included understanding that high inflation in Canada is now more about what’s happening in Canada rather than globally, and that demand on the homefront is generally outpacing the economy’s ability to supply. The Bank is trying to slow spending in the economy so it can catch up. Another interest rate hike is expected. TD Bank’s quarterly report expected this to rise to four percent by the end of 2022.

As of late September, the producer price index was still very high, shared Laura Gu, an economist with Scotiabank who specializes in the automotive sector. This means parts prices are cranked up. Internal combustion engines are eight per cent higher than they were a year ago. The growth hasn’t been this high since at least 2012, she said. Tires are very expensive – the last time prices accelerated this fast was in 2011 due to higher rubber prices, but now supply chain disruption and inflation are the causes.

“Inflation is not coming down anytime soon and that’s our baseline scenario,” said Gu.

Inflation will be impacting the plants and production at Ontario-based Dependable Emergency Vehicles for the next year, said Pino Natale, Dependable’s chief of operations. Higher wage expectations, operations and company overhead are all at play. Lack of labour is limiting growth. Labour costs, with industry wide shortages, are affecting the manufacturing industry in general, said Gu, who noted we are seeing historically high job vacancy rates in Canada. This will push wages up, and thus costs, although she said there are signs the labour market is normalizing.

There is another bright spot in commodities. Aluminum prices have slowly been dropping, said Natale, a sentiment echoed by Gu. A reduction in commodity prices could offer short term relief. These lowering prices are reflective of weak global growth and expected recessions in parts of the world. Globally, shipping costs are coming down from tremendous highs, noted Macklem in his Halifax speech, alongside some improvements in global supply chains although these changes can’t be counted on to lower inflation in Canada.

Not much cheery to report for the economy, but there are measures municipalities can take to account for all the disruption. 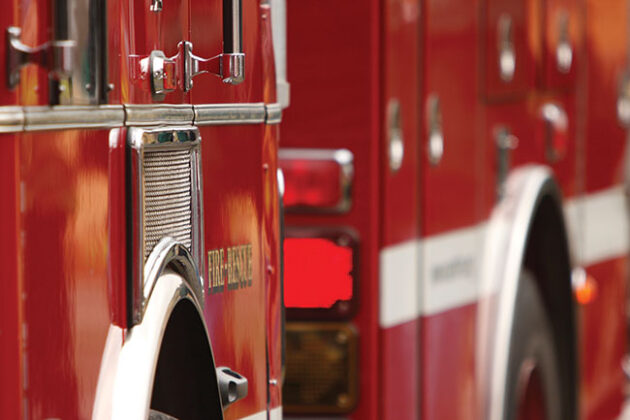 The advice from apparatus insiders
MacKay and Natale offered several tips to fire apparatus buyers in this challenging environment.

Actively plan the replacement of trucks coming out of service in the next four years now and plan to order your truck replacement two years sooner than pre-pandemic supply chain disruptions, said MacKay.

Since deliveries are taking more time, patience is essential. Dependable used to build in under 365 days and now the range could be 365 to 700 days due to the backlog from pandemic, said Natale. Replacement parts are also a challenge and not having the right part in stock could cause a delay in repair. Fire departments also need to consider the new environment of limited availability when it comes to specific brands, he said. Companies are discontinuing items and so a tire store once carrying “X” brand may not be stocking it anymore in lieu of a smaller selection of others.

Economics are changing quickly, said MacKay, so be wary of fixed and guaranteed pricing beyond 2023. The next couple years are going to be hard to budget, emphasized Natale as well, sharing that suppliers are only holding their prices for manufacturers for 30 days now when it used to be year. This will increase maintenance and service costs.

Ensure you have a percentage contingency to your capital replacement budgets for inflation and supply-chain disruptions, said MacKay. Ten per cent per year is his recommended number for finished goods and capital equipment. Natale has also been advising fire departments big and small to revisit their budgets, keeping in mind that inflation on a million-dollar vehicles is going to look more like hundreds of thousands of dollars than hundreds. When revisiting budgets, Natale’s sense of it is that some municipal councils understand what’s happening and others do not. Everyone needs to be educated on fire truck purchasing these days, not just the fire departments.

“Understand how your supplier is controlling their input cost,” said MacKay. “Even the largest truck manufacturers in North America are reserving the right to correct pricing, and all have done so in the last year. For example, all Paccar and Freightliner chassis on order were re-priced this year, regardless of existing fixed price contracts.”

New trucks aside, the used market and the option to keep older trucks in service longer are very much in play. For those replacing trucks, the used truck market has never been stronger, said MacKay. With the long queue for new trucks, market prices of used trucks have gone up. Five to eight-year-old trucks fetch a significant premium on the used market, he said. Natale is seeing frame replacements or remounts  happening as ways to save money and keep a truck in service longer.

The whole economy is still going through a change, and in some respects it’s only just begun. There is still plenty of uncertainty around inflationary pressure, said Gu. Rough calculations tell Scotiabank that even if inflation comes down fast, it’s still going to be beyond the central bank’s two per cent comfort zone next year. The industry is seeing improvement on the passenger vehicle side for delivery times, which is encouraging, but the prices are still very high.

It’s been a wild ride and it’s not over yet.

“One thing I’ve learned over the past three years,” said Natale, “is that you just need to be focused on everyday activities and be ready for what comes your way.”