It was a phone call that all chiefs dread: a firefighter had collapsed while getting on a truck to respond to an emergency call, was being rushed to hospital in serious condition and may not make it.

Twenty-year-old Jessica Boomhower was at the Greater Napanee Emergency Services headquarters station on June 25 waiting to complete a classification exam with other probationary firefighters when a call came in for a car fire. While getting on the truck to respond, Jessica felt ill and had to be helped off the truck. The crew began to provide medical attention to Jessica but quickly realized that something was seriously wrong. Capt. Matt Westhead, who is a paramedic, recognized signs of a brain injury and updated the paramedics who arrived to take Jessica to Lennox & Addington Memorial Hospital, where she was assessed and immediately transferred to the Kingston General Hospital. Jessica was unconscious and not breathing on her own.

As I drove to the hospital many thoughts ran through my head. How this could happen to such a young person? How is the crew doing? Is the fire-service chaplain available? One other thing weighed heavily on my mind: how would our department handle another tragedy? On one weekend in 2010, two highway crashes killed the wife of one firefighter and seriously injured several other firefighters and their family members; we had also endured the sudden death of the two-year-old son of one of our firefighters. Several months earlier, longtime Fire Chief George Hanmore had died of cancer.

When I got to the hospital I was met by Assistant Chief John Koeing who updated me about the status of our firefighter: Jessica had a bleed in her brain. I then met with Jessica’s parents, Bonnie and Dale, who are both firefighters with our department; they were surrounded by other family members, friends and firefighters. This situation was very serious and I will never forget the words from the surgeon who had performed emergency surgery to relieve pressure on Jessica’s brain: “She will be lucky to live through the night.” These words tore at the hearts of everyone in the room, including me; after all, Jessica is one of my firefighters, a member of my second family, a family member for whom I was supposed to be responsible, and protect.

Over the next couple of weeks, Jessica remained unconscious and in critical condition, but during this time the remarkable started to happen: the Boomhower family and the fire-department family started receiving calls, cards, tweets and Facebook messages wishing Jessica and her family well. People in the community of Greater Napanee held fundraisers to help the family, and fire departments sent donations – from British Columbia to Newfoundland and as far away as Texas.

I have always believed in the fire-department family. For us in Greater Napanee, as we once again faced potential tragedy, it was heartwarming to witness members of the fire service come together to help out one of their own, even one they didn’t know. Words will never be enough to thank members of the Canadian fire service for what they have done for Jessica, her family and the Greater Napanee Emergency Services.

Jessica has received messages from across the United States and the United Kingdom, and from Australia and Spain. She has received a few very special gifts from Chicago Fire Ladder 13 Company and a care package from Texas, among others.

This experience has taught us to believe in miracles, and the miracle stared with the medical treatment Jessica received from the firefighters, paramedics, doctors, nurses and surgeons. They saved her life.

We are happy to report that Jessica is doing very well – she aced her classification exam, and although she has a long road ahead of her, this young, strong woman can succeed with the continued support of her family and the fire-department family. 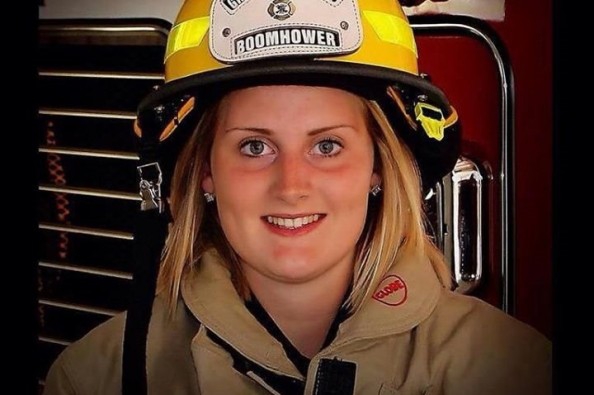 Firefighter Jessica Boomhower received an outpouring of support from departments across the world after news circulated of her collapse at the Greater Napanee Emergency Services headquarters station in Ontario on June 25. It was a phone call that all chiefs dread: a firefighter had collapsed while getting on a truck to respond to an emergency call
Print this page