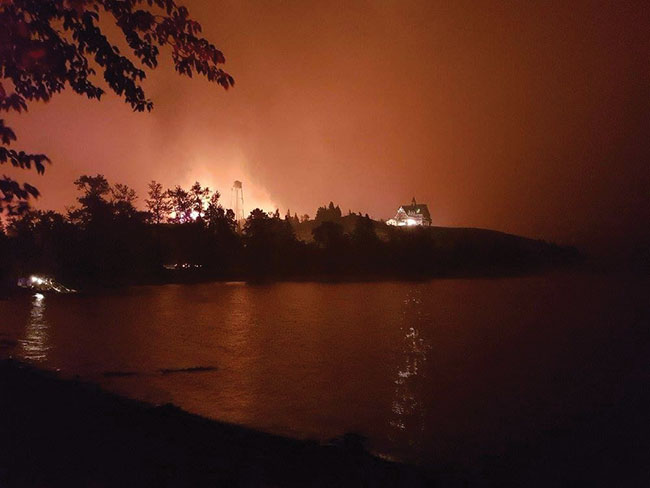 The fire as it approached the Prince of Wales hotel. Photo by Kirk Hughes

Every fire is a battle, and with a changing climate it seems that each large wildfire has become a war within itself. Recent examples across Canada have highlighted the devastating effects of wildland interface fires, where a fire threatens or destroys an urbanized area.

Last summer, the Village of Lytton experienced catastrophic destruction after three days of scorching, record-breaking temperatures. Notable forest fires in recent history stretch across the country. The 2014 Northwest Territories forest fires that strangled the only highway from the Deh Cho Bridge to Yellowknife – paralyzing traffic and trade for days and scorching vast sections of Highway 3. In 2017, B.C. wildfires struck hard in the central and southern interior consuming over 3 million acres of forest. No article on urban interface could be complete without mentioning the tragic events of the Town of Slave Lake in 2011, in which over 400 homes were destroyed, and the 2016 Fort McMurray wildfire which altered the conscious of the nation and resulted in the costliest disaster in Canadian history with an estimated economic impact that could approach $10 billion dollars, as reported by The Weather Network. Reviewing and learning from these examples has become a staple in the fire service.

Preparing for, responding to, and recovering from larger, more destructive fires that threaten urban centres should become a standard practice for fire departments that live close to forested areas. With larger fires becoming common, implementing sound practices taken from fire fighting experts across Canada, and applying them to how fire leaders should be tackling fires, may prove to be the cutting edge needed in learning how to respond to these intense conditions.

After all, experience is the best teacher. For those that have been involved in operationally high tempos in the past, it only reasons that any lessons learned on the front lines may be applicable to wildland fire operations.

At the end of August 2019, near the southwest border of Alberta and British Columbia, a fire sparked by an intense lightening storm, and fueled by exceptionally hot weather, strong winds and extremely dry conditions, was detected about 10 kilometres from the edge of a one of Canada’s national gems – Waterton Lakes National Park. Comprised of a gorgeous townsite, the historically important Prince of Wales hotel, and a hiking trail network that included bridges, picnic areas and scenic lookouts, Waterton Lake National Park was now under threat from a fire that would later be identified as the Kenow fire. What made this fire different was the amount of time allotted for defensive preparation before the fire crested the mountain range and barrelled down to the townsite.

Detected on Aug. 30, 2019, Parks Canada staff began almost immediately to prepare. Crews worked to create fuel line breaks, fire retardant was sprayed on structures and buildings, and forest firefighters fought the spreading fire as helicopters dropped buckets in an attempt to stop the head of the fire.

By Sept. 5 an evacuation alert was issued. By Sept. 8 the alert had risen to an order. Tourists, campers, seasonal staff, visitors, and permanent residents were all removed from the park boundary. A unified command was established, and structural protection firefighters from across Southern Alberta were called into service. High-volume pumps and sprinkler systems were strategically placed around the perimeter of the townsite, and the Prince of Wales hotel was surrounded by aerial platforms pulling water from the nearby cove to coat the building in a steady stream of water.

By Sept. 11 the fire had firmly established itself, moving northeast across the valley before finally bridging the crest of the townsite by evening.

Defending the townsite was a division, broken down into two taskforces (North and South), and supported by a single resource water tender strategically placed within the centre of the townsite for rapid deployment.

The taskforces consisted of a mixture of structural engines/pumpers, wildland units and command elements. Task force commanders faced a daunting job during the day of Sept. 11, leading their response to a potential wildland interface fire.

This first set of assignments occurred in the early part of the morning. Crews were organized into their sub-groups, paired with an officer and provided a detailed briefing by the task force commander. Items included in the discussion were the current state of the fire, weather conditions (meteorological), and a “breaking ground” session in which the commander provided a map to each crew member and went through it naming local landmarks, roads, and areas of significance. Afterwards, crew leaders were issued orders and provided a timeline for completion.

The original set of orders consisted of minor, but important task, all geared towards defensive operations. These tasks included strategically placing water bladders around town and removing propane tanks and wood piles. 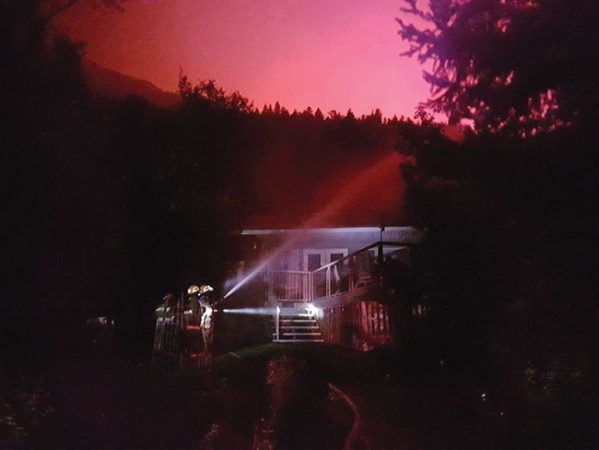 Coating the Northland Lodge as the Kenow fire descends the hill.
Photo by Kirk Hughes

The work continued as command elements collected local knowledge on the terrain, acquired more detailed satellite imagery maps and completed a reconnaissance of the surrounding area. By lunch, defensive preparations had been created to make the townsite as flame resistant as possible given that the biggest threat to fire spread would likely come from falling embers.

Commanders marked new maps with LACES terminology; naming and setting up  lookout positions, anchor points, escape routes and safety zones. Communications were checked and digital radio frequencies assigned for each task force with identified channels for division, aerial operations, and evacuation. Spots were scouted out for safety zones and evacuation plans drafted and passed up to the Unified Command Centre (UCC).

As crews began returning to their apparatus, each task force commander held another briefing explaining the map, the locations and going over details of the evacuation plan. From that, another set of orders were issued, this time more geared to the pending fire fight that was expected. Crew leaders were given assignments to foam down certain structures, staff observation posts and the painstaking process of pre-laying fire lines and hoses was started.

By mid-afternoon, firefighters were conducting response drills and taking the time to get the lay of the land, touring the district and committing to memory the evacuation routes, safety zones and immediate actions they would need to do when under pressure. Command elements were also hard at work, reviewing preparations, checking on the welfare of staff and conveying information to and from the UCC.

By evening, more accurate information was passed down to firefighters about the size and behaviour of the fire, as well as weather conditions and assigned resources. Firefighters felt confident that the preparations made would be sufficient to protect, not only themselves, but the town.

A final briefing was held in the evening, with task force commanders rehashing the main memory points they wanted to instill on their crews. The area was being regularly patrolled, and crews were provided detailed instructions on what their roles would be in the coming hours. Firefighters took turns resting up and prepping gear, unaware that the Kenow fire was about to crest the hill and descend on the townsite valley.

Command elements from Parks Canada and Alberta Forestry studied the updated reports of the fire’s behaviour over the last few hours. Original predictions had the fire possibly skipping across the valley floor and bypassing the town altogether. That was the best-case scenario. That evening, the fire changed direction seemingly intent on coming for Waterton itself.

As supper was finishing, the alarm sounded. The fire had crested the ridge line to the north – the battle had begun.

Upon detection, all crews were alerted and manned their apparatus. Aerial apparatus intensified their operations, coating the historical Prince of Wales hotel with water and retardant as task force commanders assigned trucks to do the same to buildings on the north side, such as the iconic Northland Lodge and Aspen Village.

The first significant event happened shortly before 9 p.m., when raining ash, some as large as baseballs, fell on to the roof of the old visitor centre, setting it ablaze. Spot fires popped up everywhere, as crews raced to scene after scene dousing every ember. Cameron Creek, running through the middle of the town and by fed by glacier waters, ran black with soot. The battle would last 24 hours and after all was said and done, the townsite and the Prince of Wales hotel suffered no significant damage and lost no buildings. This was a testament to the leadership of the command teams, the training of the crews, and the soundness of the defensive preparations.

The Kenow fire remains another example of the power of nature, how a small brush fire could mutate into such a large and devastating force. It also serves as a case study in defensive preparations by firefighters and the effective use of unified command, resourcing, and training.

As the threat of devastating fires continues to grow across Canada, it’s time to reflect on the past and analyze our responses for the future.

Kirk Hughes is the director of protective services for the County of Vermilion River, Alta., and a recent panelist for the Fire Fighting in Canada 2022 Virtual Summit on climate change. During the summer of 2017, Chief Hughes was assigned as a Task Force Commander to protect the Waterton Townsite during the Kenow Fire. He can be reached at khughes@county24.com.