Equipment
The problems with calibrating to pentane

Two units respond to alarm bells at a school after a caretaker reports a suspected gas leak. The local gas company is on the scene and refuses to enter the building due to elevated lower explosive limit (LEL) readings. The ladder crew begins to investigate with a multi-gas detector. 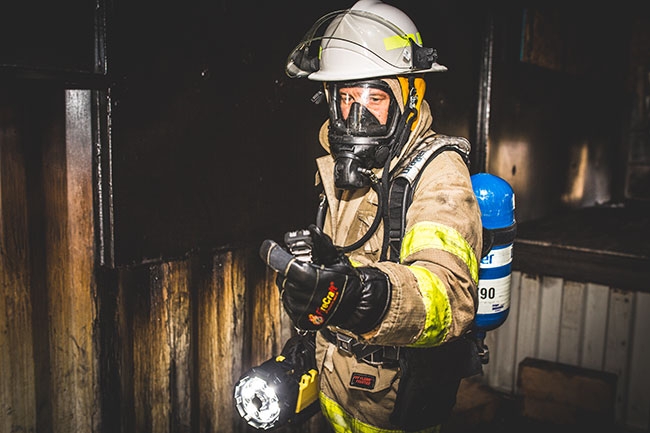 There are three main reasons an LEL sensor may lose sensitivity to higher-ignition temperature gases: an aging sensor; the sensor may be physically damaged; or the sensor may have been exposed to poisons. Two units respond to alarm bells at a school

There is no perceptible odour and the multi-gas detector indicates zero per cent LEL. However, the gas company is still getting elevated readings.

Is this the type of call to which your department might respond? Which detector do you trust? What do you do next?

The crews on scene bring in a second detector from the rescue unit. This solid-state combustible gas leak detector uses different technology. This detector immediately begins to detect gas and as readings elevate, the detector auto-scales from parts-per-million to several percent LEL.

Yet, the multi-gas detector still indicates zero per cent LEL. Using the solid-state sensor, crews trace the source of the leak to an old boiler room; they discover an uncapped pipe that runs directly from the sewer, which is allowing methane gas to escape.

Methane is naturally an odourless gas. Gas utility companies add mercaptan, a harmless gas that has a rotten-egg odour, to natural gas to warn residents of leaks.

This incident prompted further investigation. Why did the multi-gas detector show zero per cent LEL while the solid-state detector and the gas company’s detector indicate elevated LEL readings?

The answer lies in how an LEL sensor operates and how calibration gas can affect its performance.

Why is this important? Different gases burn at different temperatures. Methane ignites at 537 C (999 F), while pentane needs a temperature of only 260 C (500 F) to burn.

The sensor needs almost double the amount of energy to detect methane as it does pentane.

Think of sensors like a battery; they gradually lose power over time. Therefore, it is possible that a LEL sensor with a degraded catalyst would respond to pentane during calibration and bump testing, yet might not respond to methane. The detector will essentially be blind to methane and possibly other high-ignition temperature gases such as hydrogen and propane, which burn at 500 C (932 F) and 455 C (851 F) respectively, while appearing to operate normally.

There are three main reasons an LEL sensor may lose sensitivity to higher-ignition temperature gases: an aging sensor; the sensor may be physically damaged; or the sensor may have been exposed to poisons. Some poisons that may affect sensors are silicon compounds such as Armor All, lead compounds, halogenated hydrocarbons (Freon), sulphur compounds, acids and pesticides.

The multi-gas detector used by fire crews on scene at the school was calibrated to pentane. However, the solid-state detector and the gas company’s detector were calibrated to methane.

There are three main reasons an LEL sensor may lose sensitivity to higher-ignition temperature gases: an aging sensor; the sensor may be physically damaged; or the sensor may have been exposed to poisons.

Despite the fact that fire crews had successfully “bumped” their detector that day, they were operating with a sensor that had been poisoned. Essentially, the crews could have been standing in 100 per cent LEL of methane and their detector would not have indicated a hazard; this is the danger of a poisoned sensor.

Methane is the main component in natural gas. According to the NFPA, between 2007 and 2011, municipal fire departments in the United Sates responded to an estimated average of 51,600 gas fires each year. Almost all gas fires involved natural gas or liquefied petroleum (LP) gas.

So why do fire services calibrate to pentane? To put it simply: safety (or perceived safety). Pentane’s correction factors are lower than those of methane, so pentane calibration is more accurate than other calibrations to a wide range of flammable gases. Methane’s factors are accurate to a large number of gases, but are very inaccurate for others.

Almost all detector manufacturers recommend bumping and calibrating to the target gas, meaning the gas most likely to be encountered in the field; for firefighters that is methane or natural gas.

According to Jason Morton, a product support manager at Drager in Mississauga, Ont., a catalytic sensor is the most suitable for the fire service. However, firefighters should be vigilant when it comes to the age and accuracy of the sensor.

“For safety monitoring applications, a catalytic sensor is suitable for use because it will respond to a very wide range of combustible gases,” Morton said. “However, as the sensor ages, its response characteristics to different gases will change.

The best way to ensure that a monitor is working to its full capacity is to test the sensor with the target gas; doing so will prove the sensor’s ability to perceive even the most challenging flammable gases.

What is your target gas? Think about this: How many pentane calls has your department responded to in the last year? The past 20 years? How many natural gas calls has your team responded to? The choice for safety is obvious; the need for change isn’t always as obvious.

Steve Clark is an acting captain with the City of Hamilton Fire Department in Ontario and is a member of the department’s hazardous materials team. Clark has worked in hazardous materials response for more than 10 years in the public and private sectors, and has presented to and instructed fire departments and response teams across Canada and United States. Contact him at sclark23@gmail.com

Connor Hadaway is a former firefighter with the City of Hamilton Fire Department in Ontario who served on the department’s hazardous materials team. Hadaway has trained hazmat response teams in the private and public sectors; he is currently employed with the Ontario Provincial Police. Contact him at connorhadaway@hotmail.com