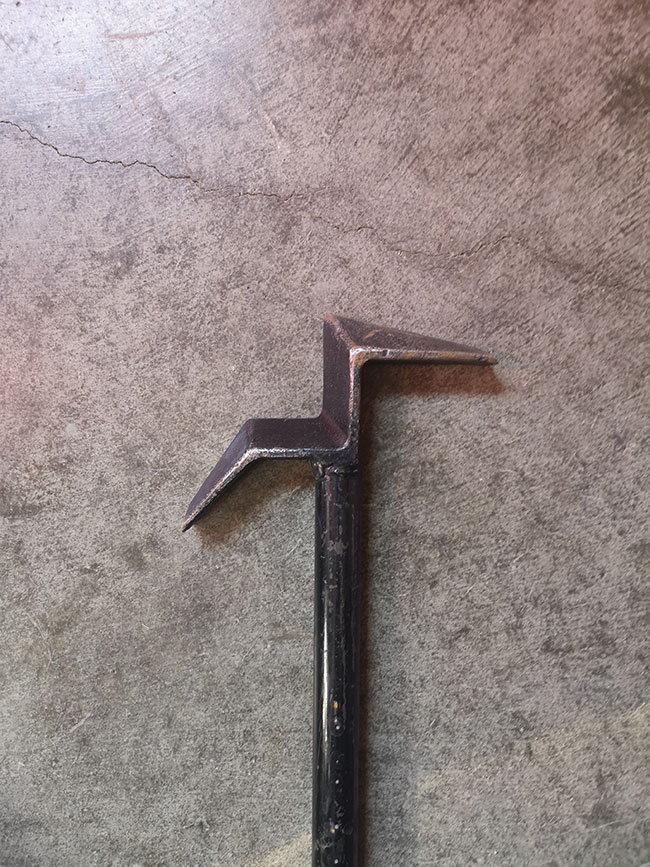 Hugh Halligan, who also invented the halligan, designed the rook hook for multiple prying applications to be used both inside the structure and on the roof. Photo credit: Nathan Pocock

The roof hook is also known to many as the New York hook. The roof hook was invented by Hugh Halligan. Halligan also invented the halligan tool, and due to its overwhelming success, it seems to have overshadowed the roof hook. Throughout the United States, the roof hook is in many fire departments in a large capacity and yet in Canada we seem to have not adopted this amazingly effective tool.

I will introduce you to the roof hook and its great design, along with debunking several of the misconceptions that can surround it, and in doing so I hope this can help the firefighters I know who are currently working in Canada trying to bring this great hand tool north of the border to become a staple on our apparatus as it should be.

The bottom chisel tip end can be used for easily removing baseboards while checking for extension. The same end can be put into a door frame along with your halligan tool and greatly increase your leverage to force a difficult door, both inward and outward swinging.

The top end of the roof hook is an unmistakable shape that has had thought and care put into every part of it. The whole head is beveled only on one side, allowing for the flat edge of the hook to be slide up or down along a wall to wedge in behind crown moldings. This same beveled edge to the top point will allow the head of the hook to be rammed through a material to gain a purchase point.

The 1 ½” ledge out to the 45 degree angle allows for the 90 degree hook to be slid in behind sheeting and other building materials letting the ledge rest on the structural members (floor joists, rafters, wall studs, etc.). The room allowed with the 45 degree angle lets the user pry down in a controlled fashion with a large force multiplier to remove the materials.

The tool has the strength to remove many of the security bars found in our towns and cities, by either using the 90 degree angle when working up high or swapping over to get the 45 degree angle in behind the window bars when working lower to the ground and needing more room to push the tool down to pry the bars from the building.

The shaft of the hook is made up of tube steel, which allows for a strong but lightweight shaft. The lightweight aircraft steel gives strength while only making the 6’ version of this hook three to four ounces (85 to 113 grams) heavier than a fiber glass hook of the same length. The shaft dictates the tool’s length, which is commonly between eight and four feet in length. As the tool was intended to be used for prying and leverage, it is important to have this steel shaft to give strength and also a controlled pry. The fiber glass versions of these tools will bend significantly before either breaking or snapping the object you are prying free very fast and in a uncontrolled way. The steel shaft will allow a smooth pry and plenty of force where the shaft will bend if you exceed its prying abilities before it snaps and fails. Once you have a small bend in the tool, it is still completely functioning and after the incident can be simply bent back into place for the next call. 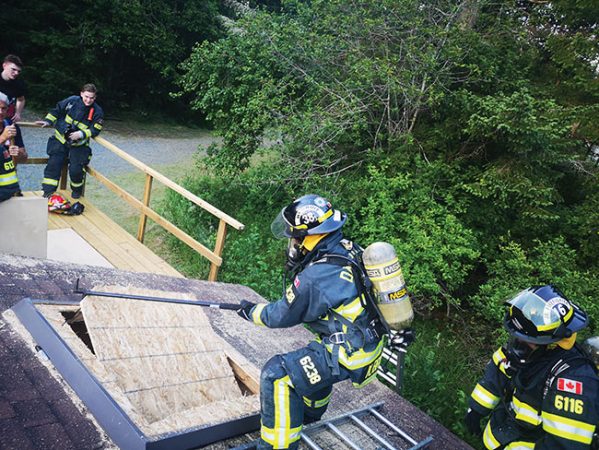 The steel shaft of a roof hook will allow a smooth pry and plenty of force where the shaft will bend if you exceed its prying abilities before it snaps and fails.
Photo credit: Nathan Pocock

There are many that worry that the shaft itself being made of steel will mean an increase in firefighter death and injury due to electric shock. There are a few things to point out in this case:

Even a fiber glass handled tool, when you are covered in water, will conduct electricity.

Halligans are made of solid steel and yet firefighters are using them to tear apart structures regularly.

In the approximately 70 years the roof hook has been in service, there has been many people looking into trying to find a injury or LODD with a roof hook being the cause of an electrocution of a firefighter inside a building and not one can be found.

If the electrical hazards are that high and apparent in your structure, no matter what tool you are using the power should be cut to the building prior to any overhaul operations.

This causes some departments to worry, but consider that a roof hook is a roof hook, it is neither a plaster hook or pike pole. Let’s go back and review the very design of the tool as Halligan intended and see that its features are that of a lightweight crow bar and prying tool not that of one used to pull plaster or drywall. Can it be used to pull drywall? Yes, absolutely and it does it fairly well, but the mere fact it can pull dry wall does not make it pike pole. I can pull drywall with a shovel if I want, and as mentioned before, due mostly to low quality pike poles and the convenience of the halligan, it is often the tool you see firefighters taking to the front door and inevitably also working over head with. A halligan tool is not a pike pole and yet I would argue for many departments, no tool pulls more plaster or dry wall than the solid steel halligan.

WCB does not have a definition for pike pole and when I spoke with a member from WCB on the phone regarding the hook and the definition, I was told that in the event of needing to look into a definition would be looked up from somewhere such as Webster’s dictionary: “A fire hook having a head with a sharp point at the tip.” Now, I think it goes without saying but also must be said, this definition can easily be swayed into including a lot of things, such as a halligan or even a shovel. Talking further with the member about my dilemma that this very vague definition and rule within the WCB regulations, I was reassured that when it came to firefighting, we were the professionals. We are the ones who should know what tools hold value on a fire ground to make our members’ tasks easier, faster and more efficient to ultimately translate to quicker access to save lives and property.

The roof hook is by far one of the most forgotten tools this side of the 49th parallel. I am encouraged constantly as I see departments across our country starting to acquire the tool and immediately fall in love with it. I have yet to meet a person that has taken this tool into a structure and not come out with a smile on their face. The tool was invented by a firefighter for firefighters as a lightweight prying tool that could be used both inside and outside of the structure for a multitude of tasks. I wish we could ask Halligan what his true intent behind the roof hook was, but I believe it is clear with the other work he did that he wanted to make our day to day lives in the fire services easier. Halligan built the roof hook after his halligan bar and it is hard not to believe it wasn’t designed to be a perfect complement. The man who invented the halligan tool, which is easily one of the most iconic symbols in today’s fire service, also invented this hook, which by all means should sit right beside it on every fire truck.

Nathan Pocock is the captain of training and operations for the Dashwood Fire Department. He spent 10 years with Vancouver Fire and Rescue Services, five years on Canada task force one HUSAR team, and three years before all that with the East Sooke fire department.