Divide and fortify with a free wellness program 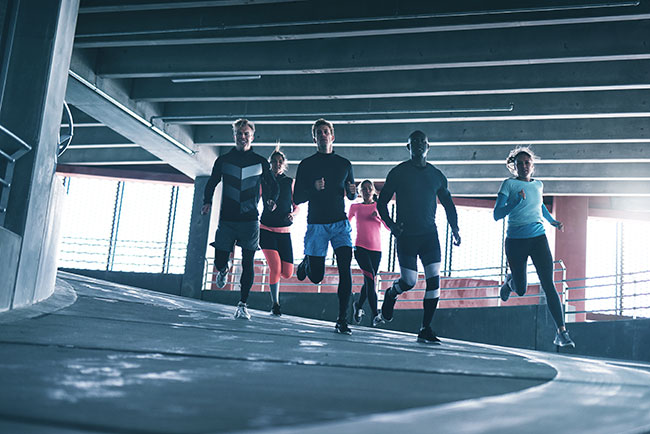 The end-of-exercise workout in The Wedge program is meant to last several hours and push its participants over a variety of terrain. PHOTO BY Flamingo Images/Adobe Stock

During my recruitment interview, I was asked about discipline. I had to think about the way I wanted to respond because when it comes to progress, I can be a little intense. Like many of us, I’d lived a lifestyle that was counter to everything I know about what it means to be a first responder: poor diet, zero exercise and a bitter, defeated outlook. On the other side of a six-year journey, I’ve discovered what it means to set a goal and make it happen.

I also discovered that staving off the darker corners of the mind starts with a properly defined aim. Without a specific, measurable, attainable, relevant, and timely goal (a.k.a. SMART goal setting), the work can quickly go to waste in a quagmire of unrelated and unfocused tasks. I found an article published in 2017 by the Canadian Journal of Psychiatry that found firefighters in Canada screen positive for symptoms of mental illness at a rate three times higher than the general public. Too often we carry a heavy load and too often we encounter obstacles toward letting down some of that weight. This information and my own discoveries along the way, led me to develop The Wedge,  a free, open-source wellness and fitness initiative focusing on self-improvement, discipline, organization and progress developed to embolden the mind, ready the body and toughen the spirit. I named this project after a simple tool — the wedge — because it provides two simultaneous tasks. It divides and it fortifies. We drive it into the end of a handle to split what once was into a stronger version of itself. We chock it into the crook of a door to hold open our opportunity for escape. The utility gained from the wedge was something I wanted to take reference from in building a challenge for people to find a better, more useful version of themselves.

The exercise operates on the premise that life has become unjustifiably comfortable and that we’re generally missing the rites of passage that once challenged us to grow and change. Using The Wedge, SMART goals are chosen, recorded, and personally striven toward in three hierarchical categories. Visually, this is represented by the three points of an inverted triangle. On the top plane, progression in mind and body are held above the only sub-category, which is craft.

The month-long program is capped off with an arduous group-based workout. Spanning multiple hours, the group isn’t tasked to win, but to keep going where they once might have quit. Each participant is encumbered by either a weighted ruck, a coiled hose or found log. The team should carry their weight, which is a representation of the burdens we carry.

The ENDEX, or the end-of-exercise workout, should take place over a longer-than-usual span of time. Ideally, several hours. This workout should cover distance and, where possible, the trek should move through conditions that leave the participants wet, dirty, sandy or otherwise uncomfortable. When we apply a correct aim, disciplined action and a stalwart heart to the obstacles in front of us, lofty as that may be, we are truly capable of remarkable progress. When adequate pressure is applied, it forces us to march forward.

There are multiple factors that directly influence our ability to match the ambitions we have set for ourselves. Time measures our willingness to keep disciplined. Effort puts our bodies in the fight and makes us do the work necessary to invoke the changes we want to see. Pace dictates the speed at which we’re able to advance. Cadence is the rhythm that creates habit and keeps us on the path.

Combined, these four elements are the crux of this program. The real impact of your month-long passage through The Wedge is simple to understand but not the slightest bit easy to execute. Worthwhile endeavours are often difficult.

In fact, to burden ourselves with voluntary trouble is to stare the beasts that bring us to our knees in the eye and accept the fight. However, life manages to manifest the ugly, bitter storms that darken the horizon, The Wedge aims to outfit its participants with the tools to turn into the waves.

The Wedge is designed to be free, open-source and available to anybody who wants to use it. Progress isn’t a subscription fee. It’s time, effort, pace and cadence.

The Wedge can be downloaded from timeandeffort.ca •

Bill Dungey is a volunteer firefighter in Brant, Ont. He is focused on fitness, mindset development and finding training opportunities to help the fire service make things better.