When assistant deputy fire chief Ray Bryant heard about construction of the tallest wood building in the world in Vancouver, his reaction was predictable. 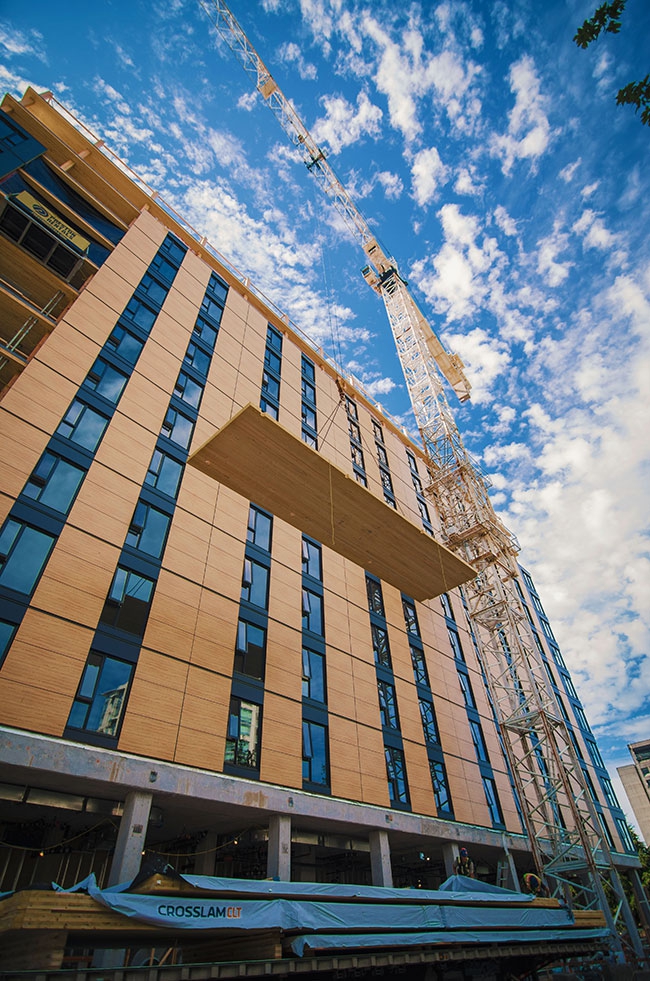 At 18 storeys At first

“I thought it was an insane idea,” Bryant said.

But once Bryant learned more about the compartment-style construction of the student residence at the University of British Columbia, his opinion changed.

“I couldn’t believe how safe it is,” he said.

The 18-storey wood building, known as Brock Commons Tallwood House, stands 53 metres and is the largest mass timber-hybrid building in the world. The building consists of 17 storeys of mass timber atop a one-storey concrete base, with two concrete cores running the full height for elevators, stairs and service conduits.

The hybrid system includes prefabricated five-ply panels of cross-laminated timber (CLT) and glue-laminated timber (glulam) columns with steel connectors, encapsulated in gypsum board and topped by a steel and metal roof. The exterior is clad in decorative wood fibre high-pressure laminate panels.

The residence opens in the spring; it will house 404 students in 272 studios and 33 four-bedroom units.

Because the building exceeds the six-storey limit for wood construction in the British Columbia Building Code, the project required a site specific regulation to be approved under B.C.’s Building Act. The regulation includes fire and seismic standards exceeding those for steel or concrete buildings, and restricts the building’s uses to primary residential, with limited assembly occupancies on the concrete first storey (for example, a student lounge is permitted, but not a restaurant or retail store).

Fire safety is also built into the project through the natural fire resistance of mass timber. The building’s 169-millimetre-thick CLT panels, used for the floors, were constructed with five layers of dimensional lumber oriented at right angles to one another and then bonded together. Glulam, used in the columns, is also composed of bonded dimensional lumber, with the grain running parallel to the beam’s length.

A demonstration fire in Quebec in a compartment built with CLT panels showed that even with peak temperatures of 1,100 C, the fire was contained to the compartment and burned itself out in two hours, except for some glowing coals.

Additionally, three layers of 5/8-inch fire-rated gypsum board covers every mass wood ceiling and column surface on the storeys with the living units of Brock Commons, while a layer of concrete topping covers the floors. The structural components of the student residence achieve a two-hour-plus fire rating (six storeys would require only a one-hour rating). Fire spread will be minimized by the building’s highly compartmentalized design and the lack of combustible concealed spaces. The building is fully sprinklered and has a backup water and electrical supply.

Building code and fire engineering specialist Andrew Harmsworth, one of the project consultants, said at a recent workshop that the extremely conservative fire-safety approach was intended to deal with not only real risk, but also the perception of risk.

“The building had to be equal or better than a non-combustible building, and I’m satisfied it is,” Harmsworth said at a timber pre-fabrication construction workshop held at UBC in November by the Canadian Wood Council’s Wood WORKS! program.

In addition, the prefab building method meant the construction site was clean, there was little hot work, and the structure and envelope went up quickly – just 66 days, an average of two storeys per week.

Vancouver Fire and Rescue Services (VFRS) management was introduced to the project early and was involved in the initial approval process. After the site specific regulation was in place, assistant chief and fire protection engineer Rick Cheung was tasked with co-ordinating the project’s construction fire safety plan.

While that work was in progress, word of the project spread through the rank and file and was met with varying degrees of concern – in part because of the assumption that Brock Commons would be the same stick-built construction as mid-rise wood-frame buildings, and would put firefighter lives needlessly at risk.

“There was fear and misunderstanding among the firefighters,” said acting training officer Martin Rusticus. “We knew we needed to address those concerns.”

Cheung, Rusticus and others involved in staff training developed a presentation that was shown at the department’s fall captains meetings in November. The presentation was then captured in an e-learn video that was made required viewing for all VFRS members (cjr.ufv.ca/videos/).

Following the training sessions and video, Rusticus said, there is a greater understanding that “because of the built-in safety measures, it’s actually safer than some of the other projects.”

Others from VFRS are equally impressed with the redundancies of the fire safety measures and the cleanliness of the construction site due to the prefab methods.

“They’ve sealed every floor and every compartment,” said chief training officer Chuck Stanford. “If a fire does start somewhere, it will not spread beyond the compartment.”

“I would call this extremely safe from a fire perspective,” he said. “It’s a very safe building, once completed.”

And, Bryant said, during construction, because of the use of mass timber, the building was certainly safer than a stick-built structure.

But what about after the building is occupied?

Assistant Chief Scott Morrison, who leads the department’s captains meetings, said a common concern he heard was the potential for interior changes that could compromise the building’s fire safety.

“It’s tough keeping track of whether [occupants] will do poke-throughs and change things on the inside,” Morrison said. “That’s the concern, moving forward – that it keeps its integrity.”

Building changes undertaken without proper permits is a common problem in many cities, Morrison said.

“That’s why we’re still in business – human error, that kind of thing.”

In terms of fire safety inspections, Bryant said Brock Commons will be inspected annually and treated like any other fully sprinklered highrise.

Like other new buildings, Bryant said, the most intense focus will be the first few years, as the department watches to see how well the owners continue to comply with fire regulations. As the department moves toward risk-based inspections, the track record and built-in fire safety provisions will be considered if a different inspection schedule is considered.

Fire Chief John McKearney, who was at the table during the building’s early approval stages, said he understands why firefighters may initially have concerns about tall wood buildings before they are educated about them, considering the fire service’s long history of battling fires in wood structures.

“There’s definitely a learning curve,” McKearney said. “The fact is that mass timber buildings cannot be compared with typical wood construction. From a fire standpoint alone, the building’s fire-resistant materials, sprinklers and layering of fire-protection systems will make Brock Commons one of the safest buildings in the city.”

The Brock Commons project reflects a heightening interest in wood construction in Canada and around the world.

In 2009, B.C. was the first province in Canada to allow for residential wood-frame buildings of up to six storeys (up from four). Quebec followed suit in 2013, and Ontario and Alberta did so in 2015; that same year, the National Building Code added provisions for six-storey wood-frame buildings for not only residential uses, but also business and assembly uses.

Canadian Wood Council president Michael Giroux said the Brock Commons project will send an important message about both the safety of mass timber in highrise applications, and the differences between light wood construction and mass timber.

“It’s really de-risking the opportunity so high rise wood buildings can be replicated in other areas,” Giroux said. “Through research and now real-time application, I think Brock Commons shows equivalence in code compliance for these buildings when compared to the safety of others. Not only that, but the design team went out of its way to ensure the safety mechanisms are doubled or even tripled.”

The ultra-conservative approach to fire protection taken with Brock Commons, such as three layers of gypsum board and the backup water system, may help ease concerns about this type of construction, but research shows that typical fire-safety systems already offer superior protection, regardless of building material.

A 2016 study of 42,700 residential fires in British Columbia between 1988 and 2015 conducted by the University of the Fraser Valley showed that most fire deaths happened in buildings without adequate fire-safety measures. The study examined all residential occupancy types and found that 85.4 per cent of the 512 fire fatalities occurred in buildings without working sprinklers and smoke alarms. The study further found that buildings with working sprinklers and smoke alarms required less fire department intervention (22.4 per cent versus 54.8 per cent), and had more instances of the fire being contained to the room of origin (92 per cent versus 59.7 per cent).

This compounds the results of a 2014 UFV research study that demonstrated that wood-frame buildings are as safe as steel or concrete buildings, once fire-safety systems are in place. “Fire Outcomes in Residential Fires by Construction Type,” examined almost 12,000 building fires reported in British Columbia between 2008 and 2013 and found no deaths from fires in buildings with working sprinklers and smoke alarms – regardless of construction type – and similar injury rates. Fire spread was also remarkably similar, with most fires in all construction types being confined to the room of origin.

In Canada, tall mass-timber buildings require special permitting, such as Brock Commons site specific regulation, but that is expected to change in the near future. For example, encapsulated mass wood timber construction of up to 12 storeys is being considered for the 2020 National Building Code.

Giroux said the hybrid approach taken with Brock Commons – blending concrete, steel and mass-timber elements – helps reduce the perception of risk while successfully demonstrating the potential of wood in construction.

The project “opens up a world of opportunity for 12 storeys or less because people will have seen it as being de-risked,” Giroux said.

With Brock Commons set to open, VFRS shared some of the lessons learned during the project’s construction stage.

Stanford, the chief training officer, advises departments that are facing tall-wood projects to get their training in place as early as possible.

“We could have done it earlier,” Stanford said. “Having got ahead of it might have quelled a lot of fears. After you see the video and how it’s built and the fire safety measures, you have a much higher level of comfort.”

Bryant noted that a good working relationship with the developer and site personnel makes enforcement of the fire-safety plan provisions easier.

“Get involved early and work with the developers,” he said. “We inspected the building regularly and watched them build it, and even got to know them on a first-name basis. It helped.”

Plan approval was required before construction could begin, as is the case with mid-rise wood-frame buildings in Vancouver. Measures included:

Len Garis is the fire chief for the City of Surrey, B.C., an adjunct professor in the School of Criminology and Criminal Justice and an associate to the Centre for Social Research at the University of the Fraser Valley, a member of the affiliated research faculty at John Jay College of Criminal Justice in New York, and a faculty member of the Institute of Canadian Urban Research Studies at Simon Fraser University. Contact him at LWGaris@surrey.ca
Karin Mark, based in Metro Vancouver, is a former award-winning newspaper reporter who writes for publications and corporate clients and provides graphic design and other communications services.