May 5, 2015, Simcoe, Ont. – This past weekend was full of lessons and firsts for me in my (relatively) new role of assistant editor. With laptop, camera, phone and tape recorder in tow, I attended my first Ontario Association of Fire Chiefs conference and trade show in Toronto.

Those of you who know me (particularly the ones I met at the conference) will know I’m a total conference newbie. I’m about nine months into the job and learning more every day. I probably looked a little lost throughout the weekend, but I was lucky enough to have an experienced editor at my side to help me navigate the unfamiliar territory. (Thank you, Laura King!)

My expectations were high going in with this being Canada’s largest show, and after hearing stories about how fun it can be from my colleagues. Three activity-filled days later, I can now report that those expectations were exceeded. It was the first time I messaged my loved ones with: “Having fun while working this weekend. How bizarre!”

Without further ado, here are the top five things I – an inexperienced conference-goer – learned at the OAFC conference and trade show 2015:

1) Social media introduces you to people.

I can’t tell you how many times I recognized faces from Twitter or Facebook and introduced myself with, “I know you!” And it was true – on a social-media level I did know them and we were already introduced. I thank my active presence on social media for making it easier to meet and greet during both the conference and trade show. You can bet I’ll be ramping that up over the next little while, and adding a ton of new acquaintances.

Whether it’s a discussion during the morning coffee break or bumping into a conference-goer in the hotel lobby, networking is happening at all hours during a conference. And networking, we all know, is the quintessential conference experience. Meeting new people is the best way to learn from them. Granted, what I’m learning as an assistant editor of a magazine is slightly different than what chief officers are learning from each other!

This lesson is specific to the trade show since the OAFC did not overlap its sessions. The Ontario trade show is the largest in Canada and I don’t think I was quite prepared for its size. (I have, of course, been informed of the craziness that is FDIC trade show in Indianapolis.) I combated my feelings of awe by wandering about slowly to take it all in, then doing a second sweep of particular booths I wanted to revisit. I was lucky enough to meet a few patient vendors who gave me laymen’s explanations for their featured products. In the future, I’d feel more prepared if I knew what products I’d like to focus in on, while being open to anything that catches my eye.

This one is pretty specific, but I thought I’d throw it in since I did, in fact, forget my business cards and keenly felt their absence. In fact, at one point, a new acquaintance took a photo of the lone card I had stashed in my wallet so that he had a copy for reference. You can imagine my embarrassment! Lesson learned.

5) And lastly, firefighters, especially leaders, are passionate about their jobs.

I had an idea of this passion before I went into the conference after months of editing copy written by firefighters, and chatting with many on the phone. But it wasn’t until I sat in on Saturday’s learning sessions that I got a real sense of the extent of that passion.

Grand Falls-Windsor, N.L., Fire Chief and Fire Fighting in Canada columnist Vince MacKenzie’s passion for the volunteer fire service and leading with the positivity shined through during his presentation on leadership attitude. Kingsville, Ont., Fire Chief Bob Kissner was clearly amped up to share his knowledge of flow paths and SLICE-RS to the room of attendees. And David Griffin – a firefighter from Charleston, S.C., who presented on the Charleston 9 firefighters who lost their lives at the Sofa Super Store fire in 2007 – took the cake for passion, and volume. He spoke (yelled) on the need to embrace change in the fire service, drawing from the lessons learned by his department.

Outside of the sessions, passion came through during the trade show Sunday as vendors eagerly shared their products and explained how they can help keep firefighters safe.

And passionate faces beamed Saturday night as the organizers of the Ladders Up for the Foundation event proudly held up a $28,000 cheque for the Canadian Fallen Firefighters Foundation.

Thank you to all those passionate people who made my first conference and trade show experience a complete blast! 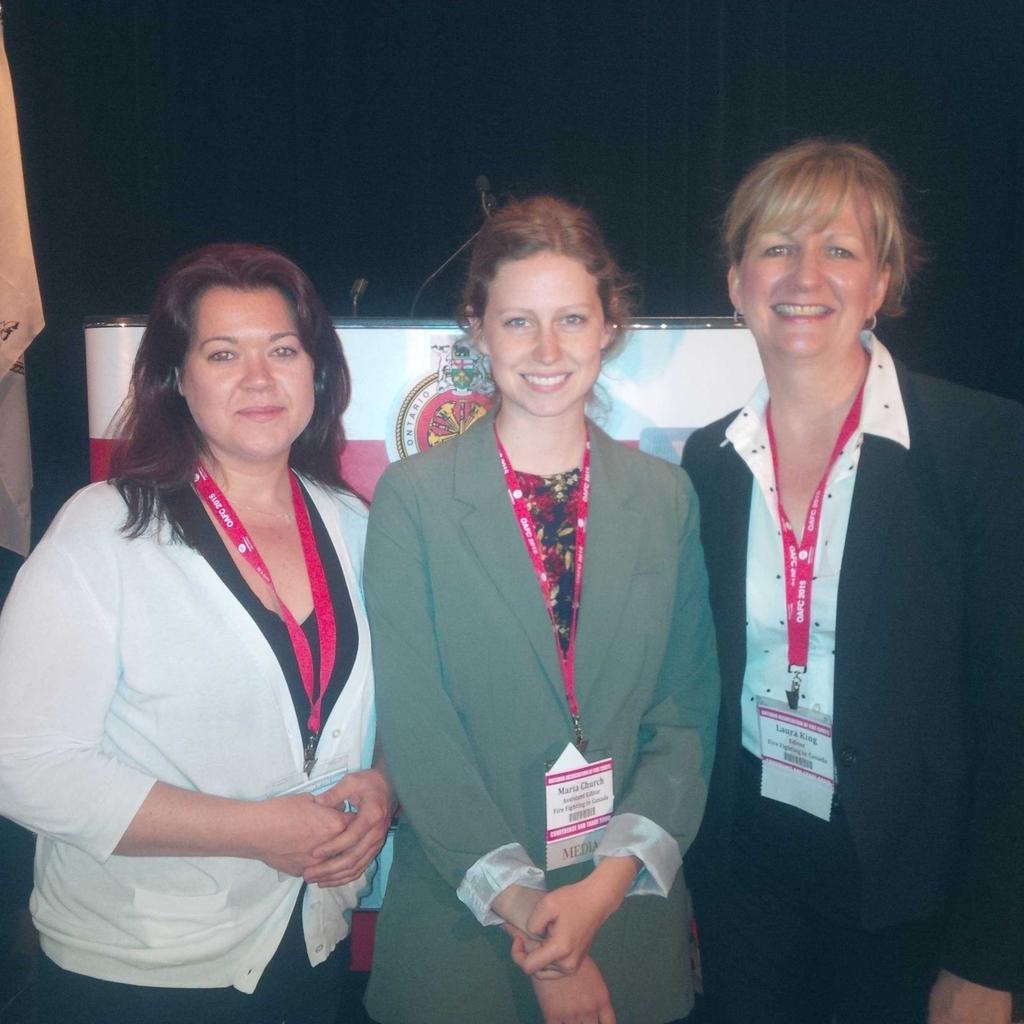 From left
Print this page