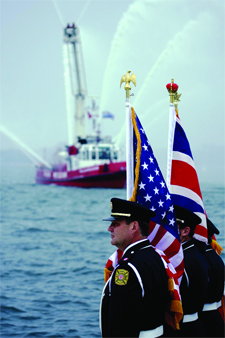 On Sunday, June 3, more than 150 firefighters and families of past members of the Toronto Fire Services turned out for a dedication ceremony that included the traditional ringing of the bell for the fallen, reading of the names of the honoured and placement of memorial wreaths by municipal and provincial dignitaries.

The Toronto Firefighters War Veterans colour guard stand on display during the memorial.

The names of 24 firefighters were added to the fallen firefighter memorial after legislation was passed in Ontario acknowledging eight types of cancers as work-related illnesses.

The changes to the Workplace Safety & Insurance Act make it easier for firefighters to qualify for compensation for work-related cancers and heart attacks. The presumptive legislation also considers heart attacks suffered up to 24 hours after fighting a fire to be work related.

The June addition of names brings the total of lost firefighters to 179 since 1848. Names added to the memorial are: