As I’m writing this column, the news reported that three more deaths have been confirmed in the wildfires burning in northern California’s wine country, which were already the deadliest series of such fires in state history. The death toll had reached 42 by the afternoon of Oct. 20. An estimated 8,400 homes and businesses were destroyed. The photos of the fires, which caused more than US $1 billion in damages, are mind numbing. 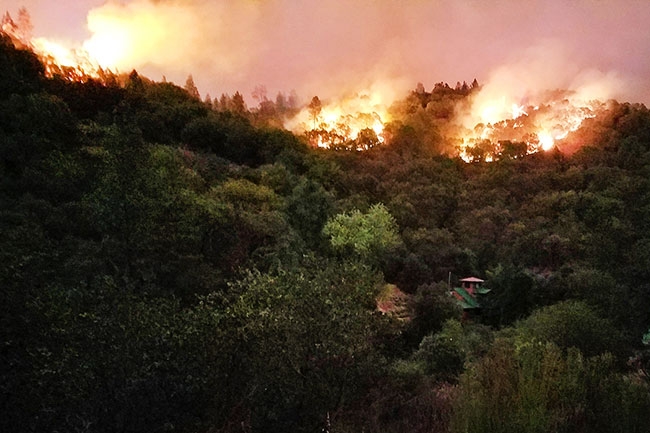 British Columbia (where I live) had the worst wildfire season in its recorded history. Our province had the same weather conditions as California: a very wet early spring, and a very hot, dry spring and summer. The rain caused rapid plant growth producing acres and acres of fuel. Daniel Berlant, the assistant deputy director for the California Department of Forestry and Fire Protection told The Mercury News the brush grew “much thicker and taller than we had ever seen.” Here in British Columbia, we sure could relate.

October is windier than most months in California, especially at night. Sudden gusts of high-speed winds filled the sky with embers, igniting hundreds of homes and leaving thousands of people with little time to evacuate.

In British Columbia, it felt like fire crews spent the entire summer fighting wildfires. But as the situation in the province cooled down, crews in California were still helping with evacuations, fire suppression, structure protection, search and rescue, traffic control, logistics, and yes, body recovery.

When I read headlines like “200 people still missing”, I wonder if we really understand the magnitude. I’m concerned that we have become desensitized to mass casualty headlines. Unless you have been through it or responded to calls of this magnitude I really don’t think you “get it”. We sympathize, but have little understanding what these casualties and missing person reports means for the families and the first responders on the ground, not just at the moment the crisis breaks, but in the following days, weeks and months.

In a statement, Sonoma County Sheriff Robert Giordano said, “We have found bodies almost completely intact, and we have found bodies that were nothing more than ash and bones.” These responders were dealing with family, friends and neighbours of all ages. After reading this, I said a prayer for the firefighters working with Giordano.

I wonder if we can ever really prepare our firefighters to deal with horrendous events like these wildfires. Today, firefighters are faced with unprecedented dangers when responding to calls. When I joined the service three decades ago, our mission seemed pretty clear: put the wet stuff on the red stuff. Back then, there were less interface fires, mainly because there were less people living in forested areas. Our department dealt solely with fire emergencies, so our training zeroed in on developing suppression skills.

I call those the Pork and Beans days. Those days are long gone. Today’s companies have to advertise Beans with Pork because the largest percentage item has to be advertised first. The majority of calls are medical in nature, and departments respond to fewer fires. Perhaps we should be called “first responder services” instead of “fire services.” No one knows this better than today’s fire service training officers.

The Firefighter’s Handbook is a total of 980 pages. And although only 31 pages – or 3.1 per cent – are dedicated to Emergency Medical Services this is where we spend the vast majority of our energy and response resources.

The changes were subtle. First we took on motor vehicle incidents, which opened the door to auto extrication and medical calls. Call volumes across our nation have risen exponentially. Volunteering as a firefighter would never be the same again.

I think of the firefighters in British Columbia’s lower mainland that are dealing with fentanyl. According to the National Institute on Drug Abuse (US), fentanyl is 50-100 times more potent than morphine, and its use has lead to an increase in drug overdose deaths in the province.

The fentanyl crisis is taking a toll on the responding firefighters and paramedics. Robert Weeks, president of the Vancouver Fire Fighters’ Union, told The Tyee firefighters answered 1,365 calls in April alone. More than half were overdose calls. A single hall – Fire Hall 2, on Main Street near Powell Street – handled 68 per cent of these overdose calls. On average, this hall responds to 14 calls a day.

A call volume this high has the potential to cause major stress, decreased morale, and health issues. More than half of those calls are non-fire related, and life-threatening overdose and medical calls can take a huge toll.

One major problem for firefighters across Canada is the frequency of calls, which have rapidly increased when we took on medical calls, traffic control, motor vehicle incidents and Haz-mat. Physical and mental burnout is becoming a real and present danger for firefighters.

Linda Lupini, president of the B.C. Emergency Health Services told The Vancouver Sun last December about 200 of the province’s 4, 500 paramedics were receiving counselling. Bob Parkinson, health and wellness director of the Ambulance Paramedics BC, said that depression and anxiety are becoming more common, with post-traumatic stress disorder (PTSD) affecting about 10 per cent of these paramedics.Support is also needed for partners and spouses to help them deal with paramedics’ psychological health issues resulting from traumatic calls.

We are living in a world where the life and safety of firefighters and first responders is increasingly put at risk. At our last practice night, my fellow training officer Rob Smith explained how the British Columbia Ambulance Service (BCAS) is putting a new spin on the existing 10-33 code: crew is in danger/life-threatening situation. BCAS is working to establish “Code 33” as a universal safe word for paramedics across the province. First responders are being encouraged to say, “Code 33” if they feel threatened or find themselves in a dangerous situation, and leave the area immediately, without packing up or retrieving gear. When a fellow first responder says “Code 33,” all emergency workers must return to the apparatus and call for assistance. Firefighters assisting paramedics in the British Columbia must be aware of this safe word and follow suit.

I’m not sure what your local protocols are, but it may be prudent to review safe words with your members.

As a service, we will never go back to simply putting the wet stuff on the red stuff – whether it is the unprecedented interface fires in British Columbia and California or the opioid crisis, firefighters are being called to respond to dangerous/life-threatening situations with greater frequency. One major challenge is that our firefighters are often unable to notice stress related issues in one another. Firefighters need to be educated to serve as peer support, and counselors must be trained to deal with PTSD, using tools such as critical incident stress debriefing.

With that in mind, I would like to give a shout out to our nation’s fire chaplains. Never before has the role of fire chaplaincy in Canadian departments been more necessary than this present moment. If your department does not yet have a chaplain, it is a great idea to consider appointing one. If your chaplain has fire service background, this is even better.

Thank you for your continued service as training officers; it is a tough gig. Please know your work is appreciated. As we are entering the Christmas season, my wife Judi and I wish the very best for you and your families. And yes, remember to train as though lives depend on it, because as we have just read, it does.

Ed Brouwer is the chief instructor for Canwest Fire in Osoyoos, B.C., and deputy chief training officer for Greenwood Fire and Rescue. He is also a fire warden with the B.C. Ministry of Forests, a wildland urban interface fire-suppression instructor/evaluator and an ordained disaster-response chaplain. Contact Ed at aka-opa@hotmail.com