I heard one of my neighbours, an old cowboy, say that experience is the best teacher, and I am inclined to believe him. Perhaps that is why I gravitate toward hands-on training rather than just lecturing. 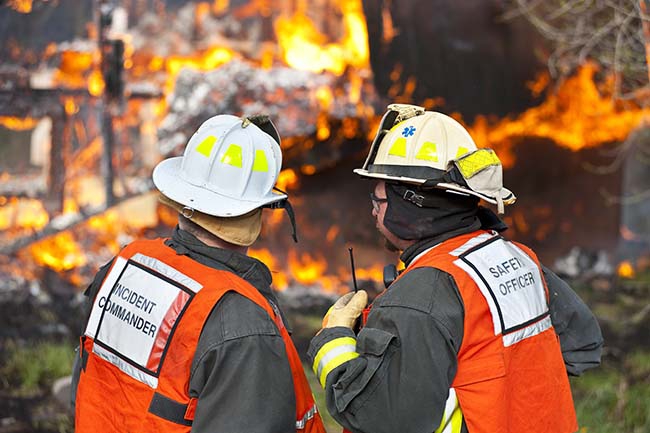 Prepare firefighters to be incident commanders by having them role play on practice nights. I heard one of my neighbours

The three go-to training methods I use are: scenarios (a description of what could possibly happen); drills (the method, the way things are done); and evolutions (the gradual development of something, especially from a simple form to a more complex form).

With that in mind I’d like to address one of the challenges volunteer departments face; we are never sure who is going to respond to a call out. In fact, the chief and deputy may both be unable to attend, so it is imperative that you train the officers – and even the senior firefighters as well – to be the incident commander (IC).

At our practice, I had two objectives in mind: first to prepare firefighters to be ICs; and to check the firefighters’ abilities to establish a water supply and deploy an initial attack line in a timely manner.

Step 1: All firefighters started the evolution standing in the hall. They were not wearing their personal protective clothing. Two engines and one tender were parked in the bays.

I assigned the IC position to a two-year firefighter. She attends 90 per cent of the calls and is a great candidate for this role. I walked her through the scenario, letting her know that she would be allowed to transfer command to a senior officer sometime after things were rolling. It is good to practice these types of transfers using department radio communications protocol; the firefighter was really glad for that when she found out the details of the scenario. (Note: The training officer can play the part of dispatch throughout the evolution.

Step 2: Call out – Structure fire (flames reported) at local public school. Time of call: 13:30 on a weekday (school is in session).

At this time, all firefighters donned their PPE, and loaded up in their perspective units. All units responded to the given location.

Step 3: Arrival – Command was established and an arrival report was given to dispatch.

I threw a lot at the IC when she arrived on scene – school children in the front yard with teachers; apparatuses needing to be staged; size-up needing to be completed; dispatch needing arrival reports.

Remember, this was an evolution, so I let it develop. The first three steps were to establish the playing field. The rest of the steps were what happened (developed) in our evolution.

At first the IC tried to deal with everything at once. I caught her eye and said one word: delegate. It was as if hearing that one word was the key, because suddenly the IC barked out a few orders and assigned a captain to water supply, another to suppression, two firefighters to do a size-up and two firefighters to assist teachers with the evacuation. Part of this evolution experience is to increase the firefighter’s ability to work as a member of a team.

Once the IC had delegated tasks, several things were able to go on at the same time, allowing the IC to get a better size-up done and contact dispatch for RCMP, EHS, utilities, and mutual aid if needed.

Step 5: The driver/operator set up pump to standby; a water supply was connected.

This was the IC’s first try at this role and I really found little to correct. That isn’t to say there weren’t any problems, as we had our share. However, the main challenges came in the deployment of the attack lines (the second objective of our evolution).

Step 7: The attack-line teams (wearing SCBA) sprayed water out onto the playing field, simulating attacking the fire, which had come through a few windows.

I had placed flagging tape on several windows and doors on the Charlie side of the building, approximately 61 meters (200 feet) from the parking lot. So when firefighters deployed the pre-connects (61 meters [200 feet]) the hoselines just reached the fire-involved area. Firefighters in SCBA were spraying water out on the playing field, simulating attacking the fire. No one noticed the possible issue of not being able to enter the building if the need arose; and in my scenario the need would arise.

Step 8: IC transferred command to the chief (done over the radio by the original IC).

Step 9: An additional pre-connect was laid from the second engine. I was hoping the need to lengthen our normal 200 feet pre-connect would be noted, but it wasn’t.

Step 10: Ventilation team set up at the school’s front doors.

At this time I called an end to the evolution and we debriefed.

All the firefighters were actively engaged in the evolution and in the debrief. I simply asked a few questions to get the debriefing going.

Prepare firefighters to be incident commanders by having them role play on practice nights.

It was noted that all three pre-connect attack lines were too short to be effective if entry were to be made.

It was observed (through the windows) that the fire was actually in two separate compartments, a classroom and a kitchen. One firefighter noted the closed doors in each room and questioned the effectiveness of ventilation. A great question, which led to a discussion about ventilation.

The suspicious nature of this fire starting in two separate rooms led to a discussion on arson and scene preservation.

The first IC really stepped up to the plate. She was given a few pats on the back by the crew. All and all, it was a good practice night.

One thing I like about evolutions is that, in most cases, they develop in ways that bring out your weak or problem areas ¬– and it’s far better to deal with these at a practice than the real thing. Try not to over plan your evolution; let it play out.

Please remember that experience is a great teacher, and train like lives depend on it, because they do.

Ed Brouwer is the chief instructor for Canwest Fire in Osoyoos, B.C., and training officer for Greenwood Fire and Rescue. Ed has written Trainer’s Corner for 15 of his 27 years in the fire service. Contact Ed at ebrouwer@canwestfire.org