This past summer proved to be a record-breaking wildfire season for the province of British Columbia. While I was on the fireline for a 22-hour shift, I found myself thinking about the Horse River wildfire that ravaged Fort McMurray, Alta., last year. 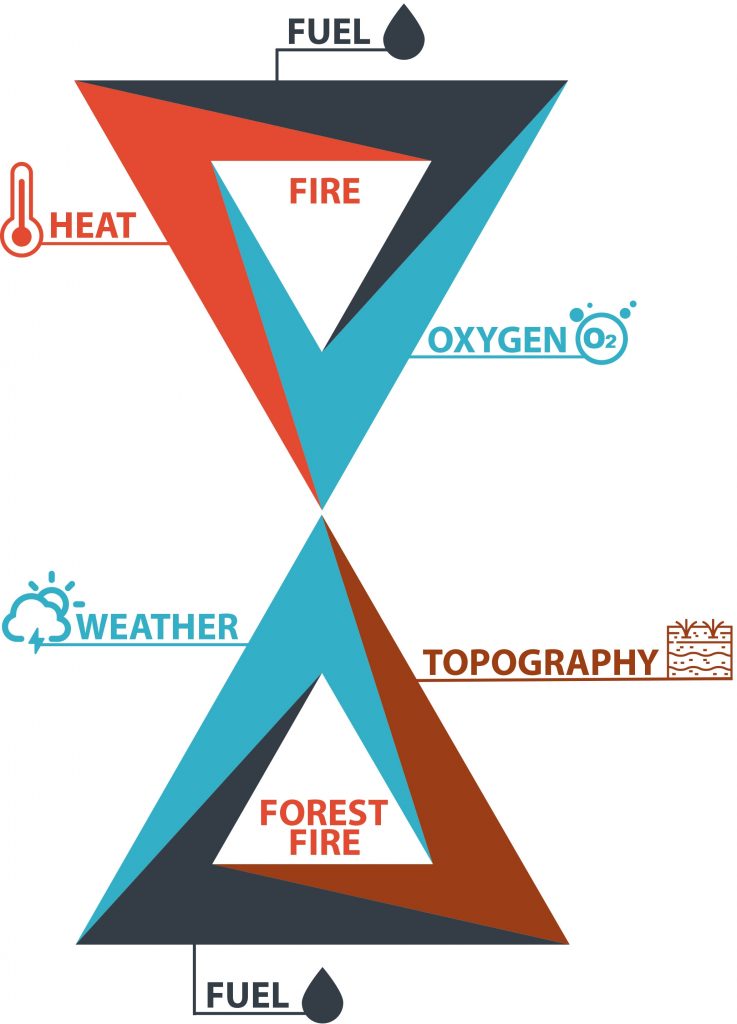 All firefighters should understand the fire triangle: heat In the wake of British Columbia's worst wildfire season on record

It is hard to be in the fire service and not know about this fire that began on May 1, 2016, just outside of Fort McMurray. Two days later, it had swept through Fort McMurray, moving into Saskatchewan. By the time it was fully extinguished on Aug. 2, 2016, the fire had destroyed 2,400 homes and buildings, and burned up nearly 600,000 hectares.

If you are involved with fire service training, I highly recommend you read an independent report on the miscommunications between crews during the Horse River wildfire, released this June, from consulting firm MNP. You can download a PDF copy at: www.alberta.ca/assets/documents/Wildfire-MNP-Report.pdf.

The report offers insight into wildfire fighting communications during the response effort and makes 10 recommendations for improvement. I suggest taking a close look at the section on wildland urban interface response (pages 39 to 44). I also recommend reading the recommendation on pages 45 to 47, suggesting that all crews involved in wildfire suppression adopt a standard ICS procedure.

After reading this report I realized although we in the fire service have worked diligently to implement the ICS program into our training, there are still grey areas. Structural firefighters still struggle with understanding wildfire terminology.

For example, most firefighters should know that a “30/30 cross” means temperatures over 30 C and humidity below 30 per cent. However, if firefighters don’t know what it means on the fire-ground, it is of little value to them. They must understand that a 30/30 cross means fires will start faster; they should expect severe burning conditions, erratic fire behaviour, and rapid rate of spread.

In the week leading up to the Horse River wildfire temperatures around Fort McMurray were rising steadily as relative humidity levels decreased. Temperatures were forecast to rise to 30 C, while relative humidity levels dropped to 15 per cent and winds approached 25 kilometres per hour. This should have been a heads up to all firefighters to expect erratic fire behaviour.

On May 1, the day the fire started, the relative humidity in the area dropped rapidly in the morning. It dropped from 30 per cent to less than 20 per cent in under an hour, all by 10 a.m. The temperature also rose throughout the day, creating “crossover” conditions. Higher than normal winds were blowing by midday, which intensified the already extreme burning conditions. The rate of spread (ROS) is the rate at which a fire extends its horizontal dimensions, which is expressed in terms of distance per unit of time, usually metres per minute (m/min) and kilometres per hour (km/h). ROS is especially important to determining a fire’s forward movement. For every eight kilometres the wind speed increases, the ROS doubles. So, if the ROS is 16 metres per minute and the wind increases by eight kilometres per hour, our ROS can go upwards of 32 metres per minute.

The words “red flag” are also concerning to me. A red flag warning is a forecast warning issued by the Meteorological Service of Canada; it was first used by the National Weather Service in the United States to inform fire fighting agencies that conditions are ideal for wildland fire combustion and rapid spreading.

A red flag warning means that critical fire weather conditions are either occurring or are about to occur. This could be a combination of strong winds, low relative humidity, and warm temperatures.

An example of these conditions in Fort McMurray happened on the afternoon of May 15, 2016, when warming temperatures and lower relative humidity levels, along with moderate winds, caused the wildfire to behave more aggressively.

All firefighters, whether structural or wildland, must understand the fire triangle: heat, fuel and oxygen. In addition to the fire triangle, wildland firefighters use another triad: fuel, weather and topography. Each of those three categories has three factors that affect fire behaviour. Here is a breakdown of each factor for those who may be unfamiliar with wildland fire fighting.

All firefighters should understand the fire triangle: heat

Note: The term “ladder fuel” is used to describe lower branches or intermediate vegetation, such as shrubs, that provide connectivity for the fire to climb upwards to the tree tops (crown).

When you place the fire triangle upside-down on top of the wildland triangle it forms an hourglass. If you consider all of these factors it will give fire crews a pretty good idea of the length of the fire fight they are facing.

Information gives firefighters the power to make good, safe and timely decisions. I encourage all firefighters to read through the MNP report on the Horse River wildfire. There may be some recommendations that apply to the safety of your members. If you discover something useful in the report, I’d love to hear about it.

I know it is more than a year later, but I’d like to extend my thanks to all of you who helped to fight this wildfire. I know some Fort McMurray firefighters saw their own homes go up in flames, while protecting the homes of neighbours. Crews never gave up, and in the end only 15 per cent of homes were lost, thanks to the tremendous efforts of firefighters.

As always train like lives depend upon it, because they do.

Ed Brouwer is the chief instructor for Canwest Fire in Osoyoos, B.C., and deputy chief training officer for Greenwood Fire and Rescue. Contact Ed at aka-opa@hotmail.com