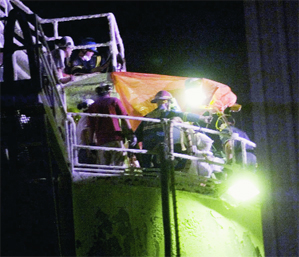 On Aug. 28, 2004, London Fire Department Technical Rescue Team members became part of a multi-agency response group that embarked upon a perilous and prolonged effort to save a man trapped in an industrial silo containing cement dust.

PHOTO COURTESY GEOFF ROBINS, LONDON FREE PRESS
The Ingersoll Fire Department’s aerial ladder truck lowers the victim to waiting ambulance crews. While working to clean the 30-metre-high silo, he had become trapped in the quicksand-like cement dust, where he would remain for over 13 hours before the delicate rescue operation was completed.

A 45-year-old man, part of a crew working to clean a 30-metre-high silo at the Federal White Cement quarry near Beachville, Ont., found himself trapped. Like quicksand, fine cement dust sucked in the man’s feet and, despite efforts to free him, kept dragging him deeper. He was wearing a five-point safety harness. Fellow workers were unsuccessful in their rescue attempts and emergency services were called in.

It was a dire situation. Embro Fire Chief Don Shewan was the Incident Commander and upon completing an initial size-up he requested the dispatch of the London Fire Department’s Technical Rescue Team.

Rescue Three and Truck Nine were dispatched, carrying nine London firefighters to the scene. An incident assessment showed rescuers what they were up against. The victim was trapped up to his armpits at the bottom of a narrow trench, about 15 metres below an entry portal. It was confirmed that rescuers would have to go down into the silo to get the man out. Respiratory protection would be required and caustic burns could result from exposed skin contacting the cement dust. The most crucial finding was a large mass (later determined to be about 15 tonnes) of hardened cement that had adhered to the wall of the silo, directly above the victim. The stability of the mass was unknown and, throughout the rescue attempt, every effort was made to not disturb or make contact with it.

Safety of his crew members is paramount to him. As he puts it, “Victims can’t rescue other victims. Hazards still exist and potentially can grow once the rescue team comes on scene.”

Embro firefighters had already provided an air line and face piece to the victim. Ingersoll’s aerial ladder was set up to provide emergency access to the top of the silo. Upon arriving on scene, Black ordered silo loading and unloading systems to be immediately shut down and locked out. The London team set about establishing an air station and Embro Fire was assigned to provide general scene lighting. Chief Shewan continued as the overall IC. Oxford County EMS set up a medical sector and an air ambulance was called to the scene and placed on standby. The onset of darkness would later force this unit to leave. Firefighters assigned to entering the silo or to rapid intervention duties donned full protective gear.

Multi-discipline operation
It would be a multi-discipline operation combining technical rope rescue, confined space rescue and trench rescue. London Firefighter Dan Glanville later told the London Free Press newspaper, “It was definitely the most precarious environment I’ve ever been in!” Glanville was the first team member lowered down to the victim’s position 15 metres into the silo to gauge his status and situation. Once he reached the man, he communicated the only way possible, with a reassuring pat on the victim’s head. Adding to the complications that were quickly compounding was the fact that the victim spoke primarily Spanish and his understanding of English was extremely limited. The victim’s son, who was also working on the silo clean-up crew when the accident occurred, helped rescuers to communicate with his father.

Glanville secured a rescue rope to the victim’s harness to arrest any further sinking into the cement dust. He then conducted an interior assessment of the silo before being hoisted back to the top of the structure. By now, the victim had been trapped for over four and a half hours.

Capt. Black knew his team had to shore up the trench walls and provide the victim better protection while he remained trapped. Black descended next into the silo. The bottom of a large plastic garbage can was cut out, lowered into the silo and placed over the victim’s shoulders to protect him from sliding debris. Lifelines and air lines were then repositioned. Black gave the victim a pat on the head and the man responded by firmly grabbing his hand. Black positioned three pieces of plywood sheeting in the trench, securing them with 4×4 and 2×4 cribbing and blocking. This was a time-consuming job, as was all subsequent silo rescue work, due to the limitations of the environment and the necessity of performing the work while partially suspended by a rope rescue system. At one point some loose material cascaded toward the victim and Black used his body to shield the victim from further harm. By the time the captain left the silo, it was just after 11 p.m. The victim had been in this precarious trap for almost nine hours.

As the team prepared to clean some of the debris from the trench bottom behind the victim and install additional shoring, a light rain began to fall. Tarps were used to shelter entry portals so rain falling into the silo wouldn’t further complicate matters.

As the incident moved into Sunday, the 29th, Firefighter Ben Ladoucer, followed by Firefighter Brent Kirchner, used pike poles to carefully break up debris around the victim, which was then sucked up with lines from large vacuum trucks that had been summoned to the scene.

Rescuers faced two challenges, the first being to ensure that the vacuum hoses did not come into contact with the overhanging cement. The second was the task of vacuuming out the cement, which became quite arduous as large chunks of cement continually clogged the lines, necessitating shutting down and restarting the system. All the while, the victim remained outwardly calm. He would later tearfully reflect that he was praying to God. “I asked God to get me out,” he said to a London Free Press reporter. “I didn’t want my son to see me die.”

Firefighter Darrell Black, who had assisted in one of the earlier silo entries, continued the vacuuming operation, facing the same challenges. At the request of rescuers, an interpreter asked the victim if he could move his legs and feet. He responded that his right leg was still pinned by something. Firefighter Black concentrated on that area and discovered that a shovel had sunk down into the hole when the victim became trapped. Black removed the shovel and the man said he was able to move his feet. After ensuring the victim’s rescue rope was secure and his air line was free, Black was lifted from the hole. It was 4:03 in the morning and a successful rescue was at hand.
The haul team at the top of the silo took up slack in the rescue rope and commenced hauling. Although anxious to get the victim out, they took it slow and sure, until the victim had cleared the menacing cement overhang. When he had, rescuers sped up his retrieval. The victim had been trapped and facing death for over 13 hours but, thankfully, suffered no major injuries.

The victim would later say, even though he feared that his feet would be torn off when he was hauled out of the cement dust, he lied to his rescuers when he told them he couldn’t feel any pain in his legs so they wouldn’t stop pulling him up. He added that his eyes had been forced shut by the cement dust and he couldn’t see anything, but he did feel a pat on the head from a firefighter. As he lay in bed in hospital, the man recognized that same firefighter when he paid the victim a visit. It was not by looking at him  …  but by the way one of his rescuers again gave him that reassuring pat on the head.

Post-incident review
Despite the successful aspects and outcome, the Technical Rescue Team post-incident review identified several opportunities for improvement (see sidebar). The team is constantly looking for ways to improve its performance and safety levels and is currently working with members of the Calgary Fire Department’s Urban Search And Rescue team to further explore these opportunities. This type of low-frequency, high-skill-level incident dramatically shows the need for continuous training in the confined space, trench and rope rescue disciplines to ensure the maintenance or improvements in skill sets and knowledge.

Rick Jefferson is the Public Information Officer for the London Fire Department.