It’s spring maintenance time at the fire department. The maintenance list is long. Truck-check sheets and maintenance records should be updated as you go. 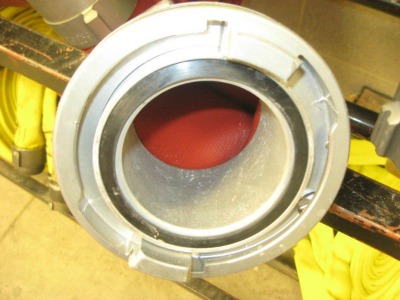 ■ Gas-powered equipment
Small-engine maintenance includes chainsaws, portable pumps, generators, vent saws and positive-pressure fans. Hopefully you remembered to change the gasoline and fuel mix on these engines on the first day of spring. There is a large difference between winter gasoline and summer gasoline. The different grades of gas are measured on a system of Reid vapor pressure (RVP), which is measured in pounds per square inch (PSI). The higher the RVP number of a particular gas blend, the more easily it vaporizes. All gasoline blends must be below 14.7 PSI, which is normal average atmospheric pressure; any higher than that and gasoline would become a vapour.

In the summer heat, the RVP of gas has to be especially low to keep it from boiling off. The United States Environmental Protection Agency (EPA) mandates an RVP maximum of anywhere between 9.0 PSI and 7.8 PSI for summer-grade fuel, depending on region, for using gas blended with 10-per-cent ethanol.

The time for switching from summer- to winter-blend gasoline varies by province. Generally, the lower the RVP of a gas blend, the more it costs. For example, in winter you can blend butane – which is relatively plentiful and cheap – with gasoline. But butane, which has an RVP of 52 on its own, can’t be used in summer; it would immediately boil off as a gas. If winter fuel is mixed in two-stroke engines, the oil mix will separate as it sits and the byproducts will fowl carburetors, which would necessitate an overhaul and new spark plugs. On a four-stroke engine, change crankcase oil and replace fuel completely as well change the spark plug. The two-stroke engine requires the same process but with less crankcase oil. Replace the spark plugs and start all these engines, then let them run for some time. If possible, turn off the fuel while the engines run and let them run out of fuel.

To reduce the chance of equipment fowling while traveling to a call, use the gasoline octane rated by the manufacturer. How many departments have only a few premixed gas and oil options for two-stroke engines? Examples of premixed ratios are 50:1, 26:1 and 40:1. These measurements are the amount of fuel to oil required for your specific piece of equipment. Over the past five or six years, premixed and straight fuel in a can have become available for purchase over the counter. For example STIHL, a manufacturer of gas-power tools, recently introduced an over-the-counter premix ethanol-free fuel in a can, called MotoMix (see photo 1). With the premix, there is no need for gas pumps, fuel cards or learning the science involved in mixing. Now if you need 50:1, it is available in a one-litre tin.

To replace the fuel in, for example, a saw, first drain all existing gas. Then run the engine until it runs out of fuel. Refill the saw’s fuel tank with MotoMix and start the engine. Make sure it functions correctly after starting; in some cases fuel mixtures on carburetors may need to be adjusted for a new fuel. Because MotoMix is ethanol free, its shelf life with the seal broken is two years, and up to five years if it is sealed in the tin. By comparison, gas from the pumps begins to separate after two weeks in a gas-powered tool’s fuel tank, carburetor or gas-storage container. This is not an infomercial for the STIHL product; we use STIHL gas-powered tools in my department and this product works for us. TruFuel is another manufacturer of premixed fuel, and comes in 40:1, 50:1 and four-stroke mixes.

the month and the year tested

and if the coupling was replaced or repaired.

■ Ground ladders
The next item on the maintenance list is ground ladders. Use the current edition of NFPA 1932: Standard on use, maintenance and service testing of in-service fire department ground ladders, and the International Fire Service Training Association’s manual for fire service ground ladders, as references for maintaining ground ladders. I also suggest keeping a maintenance log for ground-ladder inspection and testing, which will vary depending on a department’s and call volume or a training division’s use of the ladders. Vaughan Fire & Rescue Service firefighters check all ground ladders every Sunday. All ground ladders come off the trucks and are thoroughly washed with mild soap and water and light wax or silicon-based spray is applied to all friction surfaces. Do not use an oil-based lubricant. Smaller departments may require an inspection just once a month or every six months. Whatever inspection timeline you use, be consistent. Inspections should cover heat stickers, ropes, cables, beams, rungs, pulleys, feet and ladder locks.

Figure 1 is a Duo-Safety ladder report approved for use:

■ Tires
Yes, tires cost a department a lot of money when they need to be replaced. Tire air pressure needs to be checked more often in cold weather, but if that was not done during the winter, now is the time. Nitrogen has been used in tires for many years now because it does not expand when heated or condense when cooled. The lack of condensation means less rust on the inside of a steel wheel and less chance of bead or rim leaks due to aluminum corrosion. A tire’s side wall has a lot of information, such as air pressure for cold, air pressure for dual tires, tread wear indicators, tire size, make and model, load ranges and the Department of Transportation (DOT) number for tire identification. The DOT number is found close to where the tire mounts onto the rim. The last four numbers determine the week and year it was made. For example: DOT JRL MDL 3609 means the tire was made in week 36 of 2009.

There is no fixed rule in the fire service that determines tire life expectancy of tires. Manufacturers often suggest replacement every 10 years, but because of the service we provide, you may want to replace every seven years. Over time a tire can dry and harden, which reduces wet-weather handling and braking ability.

Tire rotations can help tires wear evenly and increase life expectancy. Rotations cost between $300 and $500, whereas a complete set of tandem drives costs upwards of $10,000.

■ Hose testing
Hoses – whether they are rubber or a weave of some kind – should be tested annually. NFPA 1962: Standard for the care, use, inspection, service testing, and replacement of fire hose, couplings, nozzles, and fire hose appliances, is a guideline and best practice that factors in new materials and new technology. The standard provides specific criteria for attack hose, forestry hose, booster line, occupant-use hose and suction hose.

There is a lot to discuss about hoses made prior to 1987 coming out of service. What about the hoseline that is pre connected on the truck for special application or that sits as a dead load? Test this hose annually and, if the budget allows, buy a new one. Let’s face it, 1987 was 28 years ago. If you buy a new truck, spec it with new hose – it is cheaper to include new hose in the spec than to purchase it afterwards. Figure 2 is a test flow chart for hose prior to 1987 in PSI.

Be sure when hose testing that single or multiple wall liners or jackets are identified. Over pressuring will cause failure and possible injury.

Vaughan Fire tests its hose twice a year – spring and fall – due to call volume. Departments should test hose at least annually. Many departments have a system in place that includes a full inventory spreadsheet with some kind of identification, such as a serial number and the name of the repair technician. The system for identifying hose and appliances can be as simple as using the station ID number, the month and the year tested, and end with a number. Continue numerically – for example 71032015 1. Stamp or engrave this serial number on the coupling, recording if a hose is repaired during its lifetime or a coupling is replaced. Again, use your custom serial number and mark it with an identifier that says it was replaced, such as R 71032015 1 R. Do not reuse the old hose test date. The hose, once repaired, will need to be retested so it should be a new number. I recommend you budget for and purchase a certified hose tester that can test multiple hoses at one time and consists of different hose size coupling (see Photo 3).

Hose testing requires a lot of room and a nice day or two. Once the hose is tested, use a permanent marker to run a line all the way around the hose next to the coupling until the lines meet. Next, pick a spot on that line and draw an eight-centimetre (three-inch) vertical line, straight off the coupling. Now date that hose by month, year and the pressure at which it tested, and then rebrand the coupling as mentioned earlier. (See photo 4).

Nozzle maintenance and testing should be done at the same time as hose testing. Ideally, you have been trained by the nozzle manufacturer to disassemble, perform general maintenance and reassemble the nozzle with the correct tools. If not, be sure to wash with mild soap and water, then hook up the hose to a charged line and test full operations: bale open/close operation, bale to smooth bore to fog operation, nozzle adjustments, flow rates, etc. If all systems are a go, store the nozzle back on the rig. If an appliance or hose failed, clearly tag what failed and store it in a spot for repair. Create a written log or spreadsheet to record maintenance, as well as failed parts and note when repaired parts returned to service.

■ Truck maintenance
The most important part of spring maintenance washing and waxing those beautiful rigs. Clean the interiors wash the windows and floor areas.

When the truck is in service, start by emptying all compartments one at a time. Wash compartments with soap and water and with a salt-eliminator mix to get rid of any winter road salt buildup. Avoid using pressure washers to prevent the water from penetrating electrical parts such as lighting or open door-warning systems. Wash all compartment equipment and lubricate zippers on bags door hinges, guides or rollers with food-grade biodegradable lubricants, which are harmless to skin and the environment.

Remember, rubber side down, my friends. Have a great and safe summer.

Chris Dennis is the chief mechanical officer for Vaughan Fire & Rescue Service in Ontario. He can be reached at Chris.Dennis@vaughan.ca