Equipment
Truck Tech May 2017: Rusted but not completely busted

Back in November, I wrote about frame issues due to corrosion caused by salt used on winter roads. I discussed how we are dealing with a damaged aerial here at Vaughan Fire Rescue Services (VFRS). For those who are wondering, the truck has been repaired and is back in service. For those of you who are wondering how… keep reading. 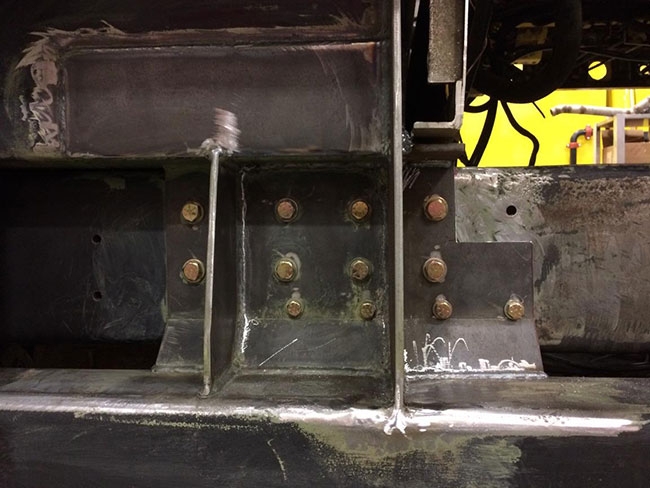 Close up of the “fish plate” bolted across the distorted area. This plate was placed 10 inches (25 cm) in front and 10 inches behind the area of concern. Back in November

When – not if – you have to deal with a frame or cross-member concern, you must document everything. This is doubly important if you are going to do the repairs internally. If you are within the warranty, having notes will make the process easier. Be sure to note the make, model, serial number, apparatus build number, mileage and hours on the road. If your province requires regular safety inspections, frames and cross members should be inspected thoroughly as part of that process.

■ The overview
During an annual safety inspection, it was discovered that our aerial’s frame was significantly twisted. The pump-house module (mid-ship fire pump) frame rails were slightly twisted. Some flexion is allowed, but even upon first glance the rails did not look good. Closer inspection unveiled large gaps between the inner and out frame rail (C Channel) at the tops of the rails. This was not normal and we needed to fix it.

The inspection revealed cracked welds in same area and broken bolts on the brackets that support the fire pump. The frame itself was not cracked. We hired a third-party to conduct an ultra-sonic inspection. The truck failed to pass Ministry of Transportation (MTO) inspection regulations for frames and chassis, deeming the vehicle unsafe for the road.

But the worst part was not the inspection failure; having to notify the chief was. He was disappointed that a key apparatus was so severely out of service that it required a complex and time-consuming repair.

Our chief had many questions: Why did this happen? What about the rest of the fleet? Could this have been prevented? How much will repairs cost? How long will the truck be out of service?

■ Explanation
Liquid anti-icing agents used on roads react more quickly than other agents like salt and sand. These agents continue to react until they are neutralized or have washed away entirely. This means that more damage can be done to vehicles. There is a gap between the frame-rail C channels where one fits inside the other. This type of corrosion is not likely to occur on a single-style frame rail but it could occur at where the cross members bolt to the inner side of the frame rail, or where any brackets overlap.

Can this type of corrosion happen to the rest of the fleet? Absolutely. Can it be prevented? Possibly. Initially, I considered contacting public works to request they stop using liquid de-icing agents. Unfortunately, sand and salt are harmful to the environment, so I knew my argument wasn’t going to fly.

■ Cost
Repair costs vary depending on the extent of the damage. If the truck is beyond repair, then the cost is whatever market value is for a replacement truck. If the problem is repairable, prices range from about  $125,000 for a glider to $250,000 for a full powered rolling chassis. In our case, repairing or replacing the frame would start at $15,000 and go up from there.

Close up of the “fish plate” bolted across the distorted area. This plate was placed 10 inches (25 cm) in front and 10 inches behind the area of concern.

■ Process
The best thing about having a dedicated fire department technician is that he or she understands the importance of the vehicle to community fire safety.

I mentioned in my November column that I had previously worked at a large Mack truck repair facility in Toronto. One of my tasks was to fix broken frame rails and/or fabricate frame rails for special applications. This experience came in handy when VFRS faced this repair issue.

VFRS hired a company to do an ultra-sonic test on the frame rails, which measures frame thickness and density through electronic pulse waves. The technician discovered that the frame flexion in the mid-ship pump house section of the aerial had exceed half  of an inch or more, which is beyond the allowable MTO specification (3/8 of an inch). Check your provincial transport inspection laws for the specifications.

Throughout the repair process, I took pictures for our records. This process, once complete, will stay with the truck’s maintenance file until the day it no longer serves VFRS. I am sure some departments have had to write off apparatus due to frame irregularities. I can’t help but think that if the right people had been consulted, those trucks may have been saved.

The frame inspection technician told us that fire departments across Ontario are facing a corrosion epidemic. As the president of the Emergency Vehicle Technicians Association of Ontario, I have heard many of our members from across the province raise concerns about corrosion issues. Some departments have had to park custom trucks on the sidelines or, in extreme cases, de-rate trucks due to the volume of corrosion on or around the aerial. Neither steel nor aluminum ladders are safe from de-icing liquids.

A fire chief must create a long-range plan when purchasing a fire truck. A replacement custom fire truck can cost between $280,000 and $450,000. The chief then has to go to council and explain that a 10-year-old fire truck, which should have lasted longer, has to be replaced because the frame is so damaged that it can’t be fixed.

Start including corrosion repair in your annual maintenance budgets as a stand-alone general ledger account. This will help city council members understand that, over time, repair expenses and regular maintenance will offset corrosion. Let the expenses speak for themselves.

Our next step was to hire an engineer who was a structural steel expert. The engineer’s first impression was that the damage wasn’t too bad, and I was pleasantly surprised. The engineer did say, though, that the damage had to be fixed. I suggested that a sub-section repair be completed on the damaged area. This engineer knows steel, but I know fire trucks.

Replacing the frame rail on one side would require a lot of hours. On one side, we would have had to remove a 32-metre steel ladder and torque box, all four stabilizers, (two front and two at the back), the air-ride suspension, the custom-made aluminum body, and the pile of wiring switches and hydraulics on the tandem truck. All of this effort, just to expose the full frame rails. So that option was not cost effective based on the age of the truck – 12 years.

Once I showed the engineer the magnitude of the potential repair, he agreed that we needed to take a different course. The engineer said a section repair was possible based on the location of the aerial torque box and stabilizer tubes in relation to the area in need of repair. The engineer suggested that I hire certified welders, but luckily the frame rail did not have to be replaced. This was great news!

Most fire-truck companies offer lifetime frame warranties however, most will not recommend welding a frame rail. This is a decision you will have to make. Based on the state of the chassis builder, I didn’t believe the repair would be covered under warranty, so I decided the frame repair was going to be done as per the engineer’s recommendation.

The fire pump had to be removed completely, which was done by the VFRS mechanical division. The truck was then towed to an outside repair facility, where we met again with the structural engineer so he could see the operation. We cut away the body to expose a large section of the frame rails.

Once the area was fully exposed and cleaned of excessive rust build-up, the engineer came back. His reaction was a pleasant surprise. With all the twisted, rusted pieces of metal removed, the frame started to come back into shape. Cold working the frame was a success.

The engineer suggested another test to determine frame thickness and check if any cracks had developed. There were no new issues. The next step was to bolt a “fish plate” across the distorted area. This plate was placed 10 inches (25 cm) in front and 10 inches behind the area of concern. It would add to the rigidity of the frames and make up for the rusted material that was removed.

Because some of the torque tube mounts were welded and bolted in frame repair area, these torque tube brackets had to be removed, as did the bolts. The aerial manufacturer supported our idea to upgrade the torque tube mount plates and re-bolt them to the frame. This will prevent future twisting that could possibly damage the frame rail beyond repair.

When the truck passed inspection, the engineer gave us the green light to complete the remaining body repairs in-house, which included painting and refitting the fire-pump. Once the truck was mobile, a third-party fire pump test and a nondestructive ladder test were completed. The last item on the list was to have the truck completely rust protected. The rust protection program of the entire VFRS fleet has been increased to prevent future failures like this one or any other corrosion concerns.

The following are recommendations from the engineer for the balance of the truck’s life with our fire department:

The cost of the repairs was substantial, but less than the cost of a replacement truck.

Remember my friends: be safe and rubber side down.

Chris Dennis is the chief mechanical officer for Vaughan Fire & Rescue Service in Ontario. He can be reached at Chris.Dennis@vaughan.ca