Ask seasoned salespeople what fire departments want in their new pumpers, tankers, aerials and rescues and you’ll get as many different responses as there are options for side compartments. 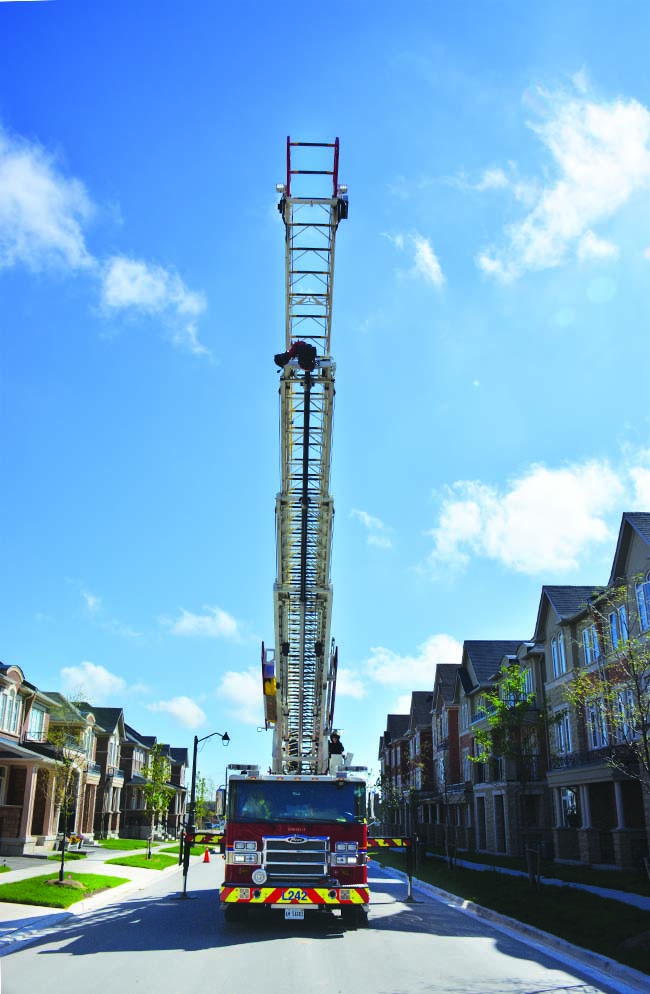 The Oakville Fire Department in Ontario bought a Pierce single-axle aerial for use in high-density areas with tight corners and narrow laneways . Truck buyers are wanting the latest features when it comes to purchasing new equipment

Combined pumper/tankers are in demand. Almost all Canadian manufacturers and distributors have experienced increased sales of the pumper/tanker configuration. And new, single-axle aerials that can manoeuvre in tight, high-density neighbourhoods – featured at the Fire Department Instructors Conference in Indianapolis and the Ontario Association of Fire Chiefs trade show in Toronto last spring – are becoming popular.

“If it’s safety related [fire chiefs] can sell it to council,” Nash said in an interview. “For example cameras, and back-up cameras . . . even for the small, rural departments.”

Ergonomics – a business buzzword of the ’80s – has finally worked its way into the fire-services lexicon. Fort Garry’s manager of international sales, Brad Petrie, says the Winnipeg-based manufacturer has made significant changes to its trucks to reduce the risk of firefighter injuries.

“We have a lot more ladders,” Petrie said in an interview, “and a three-point stance going up and down the back of the truck as opposed to just a step.”

Carrier Centres general manager Todd Finnie says driving to a call in the pumper, aerial or tanker is potentially the most dangerous part of a firefighter’s job, and truck makers are playing catch up.

“We’re seeing safety features that are coming from the passenger car into the fire service,” Finnie said in a phone interview from Brantford, where Carrier makes about 20 E–One trucks a year for the Ontario market.

“It’s not that many years since airbags were introduced. Some other manufacturers are offering safety features that decelerate the truck – when it’s coming up on an obstruction too quickly it will start to apply the brakes, which, again, we’ve seen in passenger cars for a number of years. Lane-changing sensors, weaving-out-of-the-lane sensors, rollover protection, electronic stability controls on the trucks – anything that can make that vehicle more safe.”

Metalfab sales and marketing manager Ryan Stacey is based in Centreville, N.B. He says departments that wouldn’t give ergonomics a second thought just a few years ago are ordering components that reduce the potential for back problems.

“They thought they were too expensive,” Stacey said in an interview. “Now, for example, electric-powered racks are becoming more and more requested compared to five years ago.”

Fort Garry’s Nash saw first-hand the demand for improved ergonomics during a department tour in St. John’s in September.

“That was one of their biggest complaints,” Nash said. “Heavy objects housed in high compartments. Their chief mechanic is pretty high on that – having slide-out trays so firefighters don’t have to reach up; those compartments are just compensation claims waiting to happen.”

Essentially, Stacey said, departments want the bells and whistles that help to prevent pains and sprains – “things to facilitate their guys getting things off the trucks.”

Firefighters who belong to volunteer departments are particularly vulnerable, Stacey said. “If they get injured while working with a fire department then they’re off their main job as well.”

Metalfab makes about 40 trucks a year at its Centreville plant, mostly for volunteer departments in Atlantic Canada and the northeastern United States.

“The trend for smaller apparatus is rising,” Stacey said. “In the past, the objective was to get as much equipment and water as possible on the truck, so that made for a high truck.

“Now the trucks are smaller and easier to use and safer, particularly with the electric-powered racks, and we’re trying to get the equipment down as low as possible. The longer the guys keep their two feet on the ground the better, especially late at night. When they have to start climbing up on the trucks late at night that’s when you get risk for things occurring.”

Besides prevention of physical injuries, departments are recognizing the risks associated with contaminated gear and are asking truck makers to create new systems for storing dirty items on the trucks, but outside the cabs.

The St. Catharine’s Fire Department in Ontario commissioned Fort Garry to configure external storage space on its new pumpers for dirty bunker gear. With growing awareness of proper hygiene and protection from carcinogenic particles that penetrate firefighters’ personal protective equipment, the $15,000 storage compartments are likely to be replicated.

The compartments were a priority for St. Catharines, which has adopted strict hygiene protocols and compromised in other areas to add the storage space.

“The wheel base of the truck grew,” Nash said, “so it’s a slightly less manoeuvreable truck because it’s longer.”

But safety isn’t always first, because customers are bound by budgets.

Pino Natale, director of emergency response vehicles at Dependable Emergency Vehicles in Brampton, Ont., says some clients have opted against airbags in Spartan’s custom chassis and diverted those costs to other needs or wants.

“The Spartan airbag system is in units now,” Natale said in an interview, “but believe it or not some departments are taking them out for budget reasons – they simply can’t afford them. It’s a few thousand dollars you can spend on something else.”

Some truck trends, according to salespeople, are simply a response to technology.

For example, Metalfab’s Stacey said a noticeable change in recent truck orders is the absence of generators.

“The biggest reason for that is the 12-volt LED flood lighting and scene lighting,” Stacey said. “In the past, departments wanted gas generators or hydraulic generators but with LED scene lighting that’s really not a necessity any more; over the past two years there has been a huge decrease.”

The space formerly reserved for generators is now freed up for tools – which doesn’t necessarily mean departments can load more stuff on the trucks.

Nash says the weight and balance issues are crucial.

“We’ve got a gross vehicle weight that we have to maintain,” Nash said. “It gets quite complicated. They’re trying to use every inch of space on a vehicle and pile 20 pounds of equipment into a five-pound bag.”

Dependable’s Natale says departments want their trucks quickly, which is a tall order for some configurations. Spartan has a new, 180-day turnaround promise on apparatuses, and while Natale says the company is committed to its guarantee, the myriad styles and shapes, and demand for electronics, make for tight deadlines.

“They see many advantages,” he said, “such as space and comfort, but at the end of the day are purpose built, engineered and designed for fire apparatus.

Vacuum tankers are also in demand, said Petrie, with Fort Garry, because they require fewer resources – firefighters – to operate, and can load and unload water faster than a traditional tanker.

“It’s the quickest way to load and offload water,” says Petrie. “A lot of guys will put a fire pump on these units as well.”

“With a fire pump you have to have a good air lock on suction hose to pull water in but East Wellington can use four, 80-foot sections and can pull water from anywhere,” Petrie said. “They can lay a number of lines of hard suction . . . We’re see more bids coming out with this style of tanker.”

E-One’s vacuum tanker, called the Water Master, can self-fill from up to three suction inlets from any water source; one operator can maintain a flow of 250 gallons per minute or more over a five-kilometre shuttle route.

As for pumper/tankers, ResQtech’s Innes says there is definitely increased interest in multi-purpose trucks.

And Finnie, with Carrier Centres, says customers are experiencing what he calls fleet rationalization.

“In the rural areas we’re getting calls for pumper/tankers whereas they previously had pumper and a tanker they’re now trying to eliminate a truck in their fleet, so it’s basically a pumper with a whole lot of water on it.

“It means the department has to make some decisions about where their priorities are. We are governed by how much weight we can put on the truck, how much water, how much equipment, how many people can we carry on that truck – weight is the biggest factor, so we have many meetings to discuss what they want that truck to accomplish; there are also limitations because of the size of the fire hall, and we have to say ‘We can’t fit everything you’re asking to go on this truck and still fit it into your fire hall.’ ”

The Oakville Fire Department in Ontario bought a Pierce single-axle aerial for use in high-density areas with tight corners and narrow laneways .