May 10, Prince Albert, Sask. - Well it's been awhile since I put pen to paper, or rather fingers to keyboard. During the last few weeks I have met incredible firefighters and incredible fire service leaders from fire departments attending my seminars in Creston, Errington, and 150 Miles House, B.C., and Fort Saskatchewan, Alta.

One of the many benefits of speaking at fire departments and training weekends is being surrounded by passionate firefighters. At every speaking engagement, I have great opportunities to talk about leadership, but more importantly, I get to learn from those who are leading and making a difference.

I want to write about the leadership in all of these departments, but doing so would take up too much space. Rest assured, however, the fire chiefs from these departments are truly making an impact in their communities and making great firefighters. It's a nice benefit being able to meet all of them and also see some of them successfully advance their fire services' pursuits from the part-time world to full-time, career departments.

My most recent speaking engagement was the Northern HEAT (hands-on education awareness training) in Peace River, Alta. I really didn't know what to expect and actually feared that the conference would be cancelled due to the Fort McMurray fire. However, as they say, the show must go on, and indeed it did.

With many firefighters and chief officers being pulled away to help at Fort McMurray or in the case of the High Level Fire Department and Chief Rodney Schmidt, an OSB plant fire that threatened to destroy the plant, attendance numbers were down. But, the spirit and passion was very high.
As usual, I love walking the trade show and it was always a buzz of activity.

My one-day seminar was trimmed so it could meet the changes in the schedule and was held at another hotel. Before my session was to begin, I had to go to the boy's room to get rid of some coffee. When I found the washroom the door jammed open, and feeling that it just wasn't appropriate,, I pulled the cardboard from the jam to close the door. I thought I was doing a good thing until the door closed and I noticed there was no door handle. Yup, a fire-rated door on the washroom with no door handle on the inside. It's been a long time since I actually sweated before a presentation, but believe me, I started to sweat. I was trying to figure out how to get out of the washroom. Do I yell? Do I knock on the door with the hope that someone walks by and hears me? Do I call 911? Nope, that wasn't going to happen (no reason to explain that one). So, I grabbed the door closure arm and pulled, and pulled, and pulled until I got the door open enough to stick my fingers into a gap and pull the door open. I almost cheered out loud when I got the door open! And, I didn't have to go to the washroom anymore. Go figure.

Overall, the Northern HEAT conference was incredible. I was lucky to experience a common theme in Peace River, something that I heard from members of the organizing committee as I observed them on many occasions scrambling to meet the ongoing scheduling and logistics challenges as a result of manpower shortages due to firefighters being called away to other communities. I heard the words "thank-you" and "What can I do for you?" Wow, these people were run off their feet and they kept thanking others. Impressive to say the least.

Then, I had a three-hour drive with Chief Schmidt, who returned to Peace River to get his luggage and to take me to High Level to give a seminar. On the way to High Level I heard about the OSB plant fire (which was still ongoing), and Schmidt asked if I minded if we could stop and check in at the command post so he could be briefed. Are you kidding me? Why would he ask that question? Because that is the type of guy Chief Schmidt is. Of course it would be OK. So, not knowing what to expect we stopped at the command post, I was witness to one well-oiled machine. I heard Chief Schmidt being briefed as saw the ICS tactical sheets – you name it, they were doing it. A great job that brought in about 70 firefighters from 12 different departments. I was able to tour the site with Chief Schmidt and the IC from the County of Grande Prairie, Deputy Chief Trevor Grant., These neighbouring fire departments responded without hesitation and they all worked together with one objective, and that was to save the plant; which they did. Every time we stopped during the tour, Grant would say “thank-you” to the firefighters; and I mean every time.

I took a few pictures of some five-inch high-volume hose that was burned from the fire, which showed how fast the fire moved and how quickly the firefighters had to move to different locations.

Keep up the great work folks because you make a difference every day. Never forget that!


Les Karpluk is the retired fire chief of the Prince Albert Fire Department in Saskatchewan. He is a graduate of the Lakeland College Bachelor of Business in Emergency Services program and Dalhousie University's Fire Administration and Fire Service Leadership programs. Follow Les on Twitter at @GenesisLes 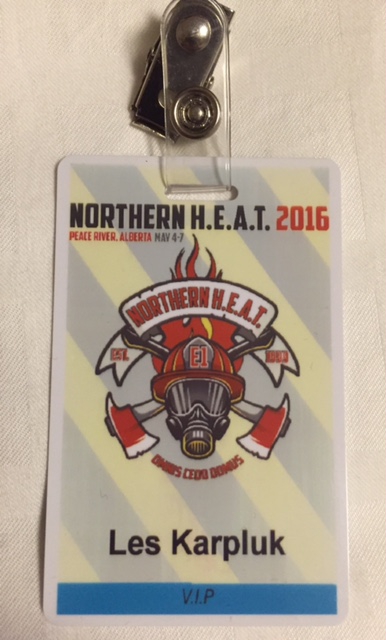 Blogger Les Karpluk was at Northern HEAT in Alberta on the weekend and writes that the common theme of the conference can be summarized by the words "thank you" and "what can I do for you?"
Print this page