I’ve been fighting wildfires for almost three decades and have noted that there are not too many wildfires today that don’t threaten something. And in spite of all the great advances in cross training (wildfire and structural), firefighters are still getting overwhelmed in urban interface fire situations. With more and more people moving into the great outdoors, this challenge is going to increase. 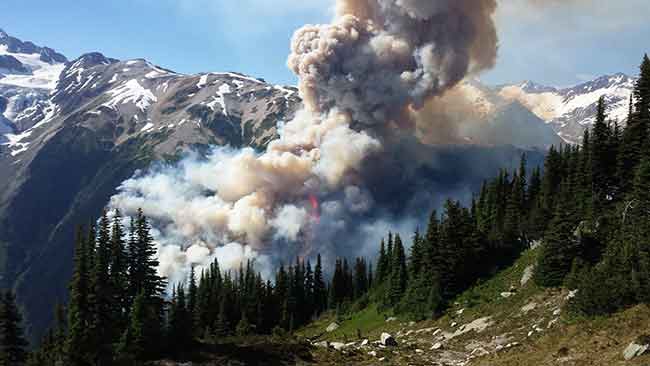 Wildland fires are associated with out-of-control burning, high intensity, high flame lengths and high rates of fire spread. These fires, fed by high temperatures, low humidity, low rainfall and a build up of fire-prone vegetation that shares the space with manmade structures, can destroy communities. Each year there are thousands of forest fires in Canada and more and more often they are on the outskirts of populated areas.

One reason urban wildland interface fires are increasing in frequency is the good job wildland firefighters have been doing in the area of suppression. Yes, we are too good at suppression. In many areas, vegetation is no longer burned off naturally and there is less fuel management, which means vegetation volumes are so high that 80 to 100 tonnes of fuel could burn per hectare in a fire that would normally burn five to 10 tonnes per hectare.

Although controlled or prescribed burning, (also known as hazard reduction) is a viable technique used in forest management, it is becoming more difficult due to the increase in population. I witnessed this during the 2003 Okanagan Mountain Park fire, which was started by a lightning strike and eventually forced the evacuation of 27,000 residents, consumed 239 homes and scorched more than 250 square kilometres. Sixty fire departments, 1,400 armed forces troops and 1,000 forest firefighters were largely helpless in stopping the fire storm: there had not been any prescribed burns on the mountain; and the fuel load was more than one-metre deep. Firefighters struggled to dig hand guards, and the multiple retardant drops served only to anger this fire dragon. The duff was so deep that the fire ate its way under the retardant, seemingly unaffected. The burning ground fuels produced such intense heat that the convection column was dropping burning embers at a distance of more than 2.5 kilometres; these quickly turned into hotspots and in some cases cut off our escape routes.

The growth of development in wildland regions now, in most cases, precludes the practice of allowing a wildland fire to burn out naturally. As I said, few wildfires today are not a threat to something. My crew and I were on that Okanagan Mountain fire from its birth Aug. 16 to its death Sept. 24 – 39 days I’ll not soon forget.

These particular types of fire incidents can quickly overwhelm even the most experienced firefighter. Firefighters must be trained (given permission) to write-off a house if it meets a certain hazard criteria – we call this structural triage.

Start by getting your firefighters to see houses as fuel rather than homes. Firefighters must be taught how to decide when to let houses burn. Triage comes from the French, meaning “to sort.” In the sorting process, homes are classified as savable or write-offs. A home is a write off if it is already burning when the firefighters arrive, or when it is not safe for the firefighters to stay and fight the fire.

Houses are typically triaged based on the intensity of the fire, the proximity of vegetation, the flammability of the house and firefighter safety. Houses with cedar siding and roofs, wooden porches and vegetation growing close to the house are more likely to be written off.

The No. 1 triage factor should always be firefighter safety. A house stands a chance of being written off if it is at the end of a narrow driveway with no turnaround and no safe place for the firefighters to fight the fire.

Several key factors influence the survivability of a structure; remember them with pneumonic REDS:

Spend a practice night reviewing the importance of proper size-ups. Notice I wrote size-ups in the plural – size-up, especially involving interface fires, must be ongoing. Firefighters must be trained to evaluate the survival chances of structures threatened by wildfire. At a higher level, incident commanders must understand how much risk is acceptable for their crews.

The following is from a paper prepared in 1990 by a student at the National Fire Academy’s Strategic Analysis of Fire Department Operations course: “’Triage’ originates from a word meaning to divide into three parts. Basically, it amounts to: 1) eliminate the hopeless; 2) ignore the unnecessary; 3) deal with the rest. While we, as firefighters, hesitate to write off any threatened structure, triage is necessary to prevent futile waste of effort. Trying to save more than you realistically would, might very well result in the loss of everything, including homes you could have saved. Forget the structures that are impossible or too dangerous to defend; leave those that are too well-involved to save. Ignore, for now, the structures needing little or no protection. Concentrate on seriously threatened but savable structures.”

During a major interface fire there are going to be far more homes needing protection than there are fire-department resources to protect them.

Size-ups should determine whether or not firefighters can get in and out safely. Avoid driving or parking on lawns. Fire apparatuses can become stuck and stranded by sinking into soft ground or, worse yet, old septic tanks. In your triage size-up, look for low power lines, above-ground fuel tanks, multiple outbuildings (full of who knows what) and vehicles parked all over the property (contributing to the fire load and possibly blocking apparatuses).

Propane tanks, unless surrounded by large amounts of flammable materials, are not a major concern. Diesel or gasoline tanks, if mounted on wooden supports above ground, can become a problem: firefighters will have to take time to remove combustibles from beneath or around tanks, however, remember time is against you.

In the spring, have your members do area familiarization, write pre-plans for your interface area and identify the wildfire hazard zones within your protection area.

Talk with homeowners and educate them about their own particular hazards. Show them those places around the house where leaves have collected – areas where thousands of sparks will collect as well. Woodpiles stacked against buildings, open decks, unscreened eave vents, combustible debris scattered around the property, and abandoned vehicles are all areas of concern. Tactfully tell homeowners that firefighters will do what they can, but if there is too much to do in the few minutes before the fire arrives, they will not be able to safely defend their homes and will be forced to move on.

If you need or want more information regarding this topic, drop me a line. In the meantime, stay safe and please remember to train as though lives depend on it, because they most certainly do.