As a fire department develops, the natural evolution is to include a uniform component of dress regulations to further enhance firefighter professionalism, improve public perception and possibly aid in recruitment. 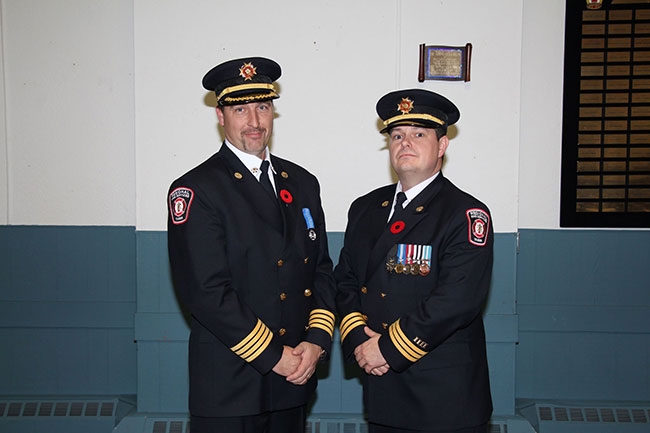 The author (right) in full formal wear. As a fire department develops

Different classes exist for uniforms, and not every department needs to go full bore in the dress uniform category. Uniformity takes on many styles. If you are a small department, maybe starting out, and the department can only afford a few job shirts and ball hats, then that is a solid beginning. A uniform is a source of pride and belonging. Whatever shape the uniform policy takes is sure to increase morale and inspire the next generation of firefighters to want to join.

Consider this a starter package for moving towards different stages of uniforms. Perhaps your department already has the sweater and ball hat look and your chief is thinking of moving up to another level. Here is a rundown of the three typical fire service categories for uniforms.

■ Station wear
Station wear is the most relaxed of the uniform standards in the fire service. Station wear comprises the items of casual clothing that is uniform in appearance and worn when performing manual work around the hall. If head dress is worn, it is often of the baseball hat variety. A t-shirt and the job shirt/sweater are worn with regular station pants, which are often made of a Nomex material with steel-toed work boots. The purpose of the station wear uniform is to present an informal and comfortable yet presentable appearance to the public should they stop by the hall. Station wear also works to reinforce a sense of belonging amongst fellow firefighters and helps identify those firefighters outside of the station when they are in their respective communities. Job shirts, sweaters and t-shirts are great advertisements for attracting potential volunteers. Station wear is often the first step in the uniform policy ladder.

■ Duty wear
Think of this as the semi-formal or business casual style for firefighters. The bottom half consisting of duty pants and work boots doesn’t change (albeit maybe a little bit of polish on those work boots). The top portion of the uniform is where the difference comes in. The job shirt is replaced with something like a dress shirt or collared golf shirt. The duty shirt is more formal, often with front button pockets, name and collar tags, and the potential to add a tie for the next level of professionalism. Duty shirts come in various sizes with darker colours often for firefighters and white for officers. Typically, this is the uniform firefighters wear during the day time hours, when visitors to the fire hall are prevalent as opposed to the station wear which is potentially worn at night or during weekend shifts. The duty wear look can feature a ball cap, but often teeters towards a forage style hat with cap badge. The style is designed to present a more official look to the general public and is commonly worn by fire prevention, education and chief officers.

■ Dress uniform
The formal part of any uniform policy is the dress uniform. Frequently worn for parades, special events and functions, it highlights the professional appearance and authority of a firefighter. The uniform itself is quite complex, with many moving parts and articles of clothing. Don’t be intimidated by the seemingly long laundry list of required items. A bit of research and outreach to a formal uniform provider will make the acquisition painless. Below is the list of items that are regularly associated with a formal dress uniform policy.

Head dress: The iconic image of a firefighter is always the traditional helmet, with its curved back piece and peaked top. In the fire service, a variety of head dress options exist for the dress uniform, although arguably not as stylish.

The common type is known as the forage cap. This is the standard pattern adopted by most fire departments and consist of a peaked hat with visor, cloth topper, leather chin strap and coloured centre band. The visor is black and shiny and made of plastic. On some senior officer and chief hats, the visor may display a gold braid with different widths denoting different ranks. The second part, the chin strap, is affixed to the cap via two small buttons. These buttons are miniature versions of the buttons on the service dress tunic, and as such bear the initials FD or a Maltese Cross. The centre band is often dark in colour and matches the cloth topper.

A combination cap is similar to the forage hat but can be distinguished by its plastic topper, which is often white in colour, and its higher centre band. In some American departments, the use of the octagonal shape replaces the round shape of the cloth topper and is popular with some larger U.S. departments like New York, Baltimore and Boston.

The kepi head dress can still be found in some fire departments. The kepi was made famous by the French Foreign Legion but has been adopted by emergency services around the world for dress occasions, especially those with strong French influences. It comprises of a wide centre band, which can be adorned with braid depending on preference and rank, a small visor and mounted chin strap.  This type of headdress is popular because of the many ways it can be modified; from the top of the hat to the band, it can be decorated with many different objects to enhance its visual appeal.

Although not an all-inclusive list, considering head dress styles are as varied as the departments that wear them, the limit is endless. From cowboy hats to balmorals, to fur caps to Stetsons, the head dress generally depends on the style a department wishes to portray. The most important feature is the ability to match the headdress with the style of the upper portion of the dress tunic.

Tunics: Four types of tunics exist that are common in the fire service. The first, often called the high neck or mandarin, has a rounded collar and is often the domain of honour guards. The “red serge” of the Royal Canadian Mounted Police is a common example of this uniform, which was based on the British-style military pattern tunic of the early 18th century. Accompanying the mandarin collar style are the scalloped flap pockets and lined epaulettes.

The other three styles can be found throughout the Canadian fire service. The most common style, the suit jacket, actually makes up two of the four types. The difference is quite subtle; the suit jacket is broken down into those displaying eight/six buttons (double breasted) or four buttons (single breasted). Silver buttons are for firefighters whereas gold buttons are reserved for chief officers. Fit, price and design are the only determining factors when deciding which style of jacket best suits the need of a department.

Lastly, the Eisenhower Jacket was made famous during WWII. Characterized by its waist cropped length and rear pleats the jacket provides more freedom of movement while maintaining a professional and polished appearance. Mostly the adoption of this style of tunic is based solely on department preference but has gained popularity in recent years due to its lower cost and ease of tailoring.

With the head dress and tunic now in place, the last part is the lower portion of the uniform. Dress pants are a straightforward acquisition with the only issue being material types. Some departments that are based in the north may prefer a heavier wool pant for heat retention as opposed to a lighter cotton blend.

Footwear is the last of the formal uniform pieces that requires attention. The decision is whether to use the ankle boot, a style made common by the military that is made of leather and holds a shine obtained from the addition of endless hours of polish; or the easier oxfords, which have been coated with a high gloss shine and require only a damp rag to wipe away any dust. The choice of the first is purely traditional, whereas the oxfords have grown in acceptance because of the time savings involved in not having to spit shine the whole shoe.

From casual to formal, uniforms are a key component of any fire department. Whether the policy is simple and limited to station wear or if the formal dress regulations are the standard, remember that every piece of clothing displays the pride of an organization serves to emphasize to the public the competence, skill and abilities of its membership.

Kirk Hughes is the Deputy Fire Chief of the M.D. of Taber Regional Fire Department in Alberta. A veteran of the Royal Canadian Mounted Police, Kirk has served with the Burlington (ON), Portage la Prairie (MB), Deline (NT), Fort Providence (NT) and Behchoko (NT) Fire Departments before taking a position with the Municipal District of Taber as the Community Safety Officer. KHughes@mdtaber.ab.ca.