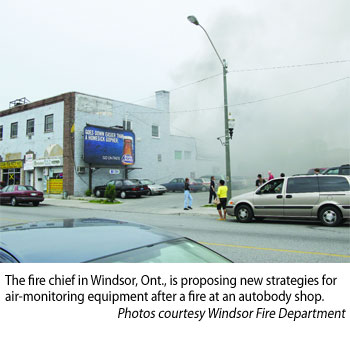 Friday, May 25, 2007, 11:11 a.m.: Fire breaks out at an auto-body shop at 720 Wyandotte East in Windsor, Ont., after an attempt to ignite an acetylene torch goes horribly wrong. Located inside a mixed commercial/residential area of the city, the shop contains three vehicles, 300 to 400 litres of oil, between 500 and 1,000 tires, many car batteries and two compressed canisters, one oxygen and the other acetylene.

As flames and heavy smoke pour out of the building, Windsor Fire & Rescue Services quickly ramp up to a third alarm response. Firefighters evacuate 600 nearby homes and businesses in case the fire spreads.

WF&RS is also concerned about toxic gases, especially because the auto shop's exact contents aren't known. At 2 p.m., the Ontario Ministry of the Environment is asked for help by the City of Windsor.

"Ministry staff were informed that the fire was under control and would be extinguished by the time air-monitoring equipment and personnel arrived from the ministry's London regional office (approximately two hours away)."

At about 4 p.m., alarmed by black smoke spewing from the auto-body shop, Windsor Mayor Eddie Francis declares a state of emergency. Twenty minutes later, City of Windsor dispatch asks the environment ministry to test the air for toxins. "Upon confirming that regional air-quality monitoring staff would be unable to respond to the incident, ministry staff initiated a request for air monitoring by the ministry's mobile Trace Atmospheric Gas Analyzer (TAGA) air-monitoring unit," says Steele.

After confirming that regional ministry staff wouldn't be able to respond to the scene, ministry staff made a request to deploy one of their two TAGAs to the scene. The TAGA unit is based in Toronto, a good four hours up Highway 401 from Windsor. While the request for air-monitoring equipment works its way through channels, the WF&RS does its own tests and confirms that the air is back to normal by 6 p.m. With the fire now in the "overhaul stage", the state of emergency is cancelled. But Mayor Francis is angry about the ministry's failure to provide on-site air testing equipment. "When there's a fire, and there's an unknown source, there's no one to do the testing," he said afterwards, according to CBC News in Windsor. "It doesn't do much to protect the health and safety of the people around the fire."

The TAGA explained
The Ontario Ministry of the Environment has two of the six TAGA 6000 mobile units in North America. Both are housed in 9.1-metre-long buses packed with sophisticated gas analysis equipment, at a cost exceeding $1 million apiece. Highly trained technicians are required to operate the TAGAs.

Given the complexity and cost of the TAGA units, plus the time it takes to drive them to other parts of the province from Toronto, they are not used as first-response vehicles. In instances in which they are used to analyze smoke and aerosolized emissions, "A great deal depends on where the fire or spill occurs and the travel time involved," says a ministry document entitled, "In Brief" (available online at www.ene.gov.on.ca/programs/3662e.pdf). "During normal work hours, a mobile TAGA may be able to respond in as little as one or two hours, or it may take much longer if the unit is already out doing surveys in another part of the province."

Should a serious air emergency occur anywhere in the province other than Toronto, it can take many hours or even days to get a TAGA in place. "There are 800 municipalities in the province," explains Steele. "Equipping every municipality with a TAGA and the three PhDs needed to operate it would be pretty cost prohibitive." He estimates the cost per unit/team would be about $2 million, working out to $1.6 billion for the whole province. For the record, the ministry's budget is about $360 million a year, Steele says.

The Windsor incident
Thanks to swift action by Windsor Fire & Rescue Services, the three-alarm blaze at the auto-body shop was contained to the premises with some extension to an adjoining building. That's no small feat, given the proximity of low-rise apartments to the site, many with wooden balconies.

Chief Dave Fields credits this success to his department's response procedures. "We have a series of ‘automatic upgrades' in place," he explains. "For instance, if the first crew on the scene reports visible signs of fire showing in addition to smoke, the response is automatically upgraded to the next level and more trucks are sent out." In the case of the auto-body fire, after an initial aggressive interior attack, it was a trio of aerial trucks blasting water through the shop's opened roof that brought the fire to heel.

As for air-quality issues, "We have our own hazmat unit with CBRN
training that has some air-quality detection equipment," Chief Fields says. "It's not at the same level as the ministry's TAGAs, but this equipment can give us a pretty good idea of what we're up against."

Unfortunately, such was the level of response to the three-alarm blaze – 70 firefighters in all – that the hazmat team was too busy fighting flames to stop and take air readings. This said, the decision by the WF&RS to evacuate local residents and cordon off the area was driven by fears of the fire spreading as much as it was by what was burning inside the shop. "We did lock down the schools in the area, to keep the kids from possibly breathing in the fumes," says Chief Fields. "But it was the risk of other structures catching fire that worried us most."

The heart of the matter
According to those involved, the Windsor fire and the potentially dangerous air-quality situation illustrates a conundrum for fire departments and emergency responders and provides some lessons about communication for future incidents. Since the fire, at least one person close to the situation, who didn't want to be named, have questioned the decision by Mayor Francis to declare the state of emergency and ask the ministry to send in air-monitoring equipment.

On further examination, however, according to a source, Francis's decisions were based on confused information that he was given by various parties and agencies involved in the situation.

Indeed, Chief Fields confirmed in an interview that given the fact that his hazmat crews were busy fighting the fire and could therefore not do any immediate air monitoring, it made sense at that point for the mayor to ask for help from the ministry. Mayor Francis's office declined to comment.
Still, Chief Fields says some fine tuning is needed.

"We really have to sort out with the ministry what their role is going to be for air quality. We need to know what help we can expect from them and when we can expect it."

After considering the realities of government funding, Chief Fields suggests an alternative. "Rather than spending a lot of money deploying separate teams, the ministry should give us the money to buy supplemental air-monitoring equipment," he says. "This would improve our ability to assess air quality threats, at a price that would be affordable."

The chief will report back to council in the near future with suggestions regarding the lack of air-monitoring services in Windsor and Essex County.
The ministry's John Steele is sympathetic, to a point. He says buying air-monitoring equipment for fire departments is a good idea but only if the departments pay for it, not the province.