March 2016 - Jan. 11 started much the same as any other Monday morning. The crew members on duty at the Swift Current Fire Department in Saskatchewan completed their morning checks and had prepared for some fire inspections. 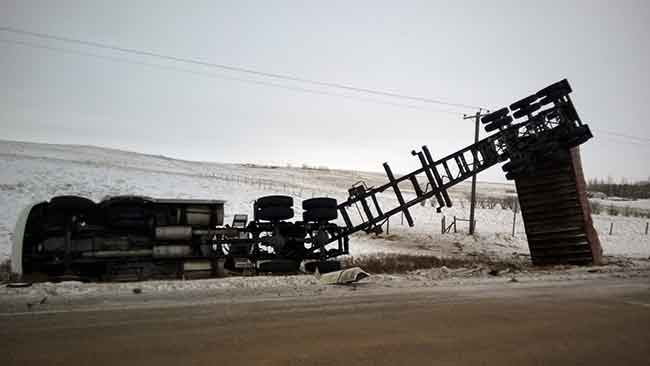 At noon, they started cooking lunch, not knowing they would not get to eat it. As the crew was sitting down to eat, SCFD was dispatched to a minor MVC on a city street. This call came in at 12:26 and the crew arrived on scene at 12:30 to find two half-ton trucks had collided at an intersection and sheared off a fire hydrant. Crew members were doing the scene assessment and talking to the drivers, who were not injured, when another call came in at 12:34. The crew was dispatched to an MVC on Hwy 4, about 10 kilometres north of the city.

As there were no injuries and no risk of fire, the crew left the scene in the hands of the RCMP and responded to the highway incident. As the crew was leaving the city, a second alarm was requested to have the off-duty crew called back to cover the city while the first crew was out.

As the firefighters approached the scene, they could see a truck in the ditch on the east side of the highway and the ambulance parked near the truck. The crew reported on-scene at 12:44 and Capt. Rick Anderson assumed command. Firefighter Kent Silbernagel was dropped about 200 metres short of the scene to set up warning signs and firefighter Chris Haichert was directed to drive the engine up to the accident scene.

As the engine approached the truck, firefighters observed an intermodal container standing on its end with the top facing them and with one corner still attached to the trailer, which was up in the air. A person was walking on the highway talking to the paramedic from Swift Current Ambulance. The engine was staged short of the accident scene and Capt. Anderson exited the engine to approach the accident on foot. At this time, Anderson noticed a radioactive III, class 7 placard and UN2912 on the upper corner of the container. Placards were not previously visible as the only top of the container was viewable on approach.

This person on the highway was identified by Anderson as the driver of the truck; he was not injured. Anderson talked to the driver, who confirmed that he was carrying yellowcake uranium and he indicated that there was little risk from the product as long as it was in the container. At this time, Anderson ordered a 300-metre exclusion zone be set up. He directed firefighters Haichert and Keith McLeod to back up the truck to the intersection with a gravel cross road and stop all traffic. Anderson requested the RCMP drive around to the north end of the scene and stop traffic from the north.

Anderson then requested the on-call deputy chief be dispatched to the scene with radiation monitors, checked the Emergency Response Guidebook, and contacted the Canadian Transport Emergency Centre, Canutec, for further advice. Just before 13:00, I arrived at the hall from lunch as Deputy Chief Pete L’Heureux was getting the radiation monitors, and I was briefed about the accident. I followed L’Heureux out to the scene. On arrival, we were briefed that Canutec had confirmed that the initial evacuation zone was 25 metres – expanding to 100 metres for a large spill – and that responders should stay upwind. Canutec also confirmed that we could safely approach to within 10 metres to test the area but to take precautions against inhaling or ingesting the product if we approached closer to take readings.

Based on this information, L’Heureux, Anderson and I drove to within 100 metres of the scene and then approached using the radiation monitors to do a scene survey. During this survey, we noted a small amount of what appeared to be yellow powder in a crushed area of the container. We approached with the radiation monitor and a reading appeared on the monitor at about two metres away. We then met with the driver and had him contact his dispatch centre to initiate the Emergency Response Assistance Plan (ERAP) and secured the scene to 300 metres while we awaited the arrival of the ERAP team.

As the shipping papers were still in the truck, we relied on the driver for information. We contacted Saskatoon-based Cameco, the world’s third-largest ura-
nium producer, and were informed that the shipment belonged to Heathgate Resources of Australia and was being sent to Cameco’s Blind River, Ont., refinery on a truck owned by RSB Logistic, based in Germany and Dubai. As the importer of record, Cameco would respond to the scene and had activated Envirotec from Saskatoon, the company’s hazmat-response contractor. The container was holding 63 drums of uranium concentrate, known as yellowcake, stacked two high.

The RCMP contacted the Department of Highways and Infrastructure to close the road and set up barricades and warning signs. From this point on, it was hurry up and wait. Envirotech and Cameco personnel started to arrive at about 17:15 and a representative from the Saskatchewan Office of the Fire Commissioner arrived at about 17:30. As it was getting dark, it was decided that the evening and night would be spent planning for the safe recovery of the product and getting the resources and equipment in place. At about 20:30, a private security firm was hired to man the barricades and as there was no risk of fire, our firefighters were relieved and the scene was turned over to Cameco.

The next morning, representatives from the Canadian Nuclear Safety Commission and Saskatchewan Environment arrived on scene to supervise the recovery and cleanup. Envirotech confirmed that the yellow powder seen on the exterior was in fact uranium. Two cranes were brought in to separate the truck from the container. A vacuum was used to recover the small amount of uranium on the exterior of the container and the tear was plugged with spray foam.

Cameco had access to a container overpack that had been made for another incident. Once the truck was removed, the Cameco crew laid down the container on the base of the overpack, lowered the bell top over it and sealed it with bolts. The pack was loaded on a truck and transported to Cameco’s facilities to be opened and recovered in a safe environment and repackaged for continued shipment to the refinery. The area was scanned for any further product and, when it was determined that the area was clear, the scene was turned over to the Department of Highways and Infrastructure. After some snow removal and sanding, the highway was reopened at about 21:00 Tuesday.

Department Profile
Swift Current Fire Department operates out of one hall protecting a city of about 18,000 and provides rescue services to seven surrounding rural municipalities under contract.