Features Health and wellness Hot topics
Volunteer competes at Worlds: He trains on his own, and does it for his health, fun and camaraderie

He trains on his own, and he does it for his health, the fun and the camaraderie 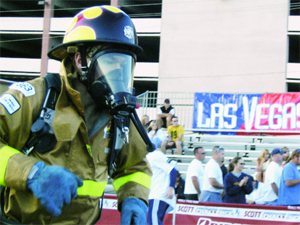 He trains on his own, and he does it for his health, the fun and the camaraderie, not necessarily in that order. Volunteer firefighter Chris Quartermain recently returned from the World XIII Combat Challenge in Las Vegas and can’t wait to go back – and he’s not even a gambler. He is a combat challenge competitor, though, and his enthusiasm bubbles over talking about it.

Chris, 33, was the only volunteer from New Brunswick who competed at this year’s World event. Fredericton, a full-time department, also had a team competing. He placed 109th of 370 competing, with a time of 2:08.

“The course in Vegas was a little different and harder,” said Chris, noting that most Canadians run this course five to 10 seconds slower. He attributes this to the narrower stairs and lower railings on the tower and carpeting on the rescue drag. The Canadian event uses a rubber mat.

Last year in his first challenge, the Maritime Classic, Chris ran a 2:47 and posted a 2:57 time at the 2003 nationals. He steadily improved in 2004. At Chandler, Que., his time was 2:27, then 2:13 at the regional in Halifax and finally a sub two-minute run at the Canadian national event, finishing the course in 1:57.

After taking the winter off from training – something that won’t happen this winter as he says it is too hard to get back into the regime – Chris trained every day. First thing in the morning before work, he would bike to the firehall, about a mile from his house, jog around the hall several times for the equivalent of about a half-mile.

Then he would pull a yard drag used to smooth the hall’s parking lot to simulate the dummy drag, then bike the mile back home. Chris is 5'11' and has always kept in reasonable shape, weighing about 158 lbs. before he began training last year. Now he is at 175 lbs. and hard as rock.

His wife Lorrie “just shakes her head and thinks I’m crazy!” But it’s a family affair for them on the local challenge circuit, hauling their 30' fifth wheel trailer with daughter Riley, 3, and son Colton, 6.

Why does he do it? “Healthwise, I feel a lot better. I used to have a back problem but after training all last summer my back doesn’t bother me anymore.

“It’s almost an addiction (the training). I don’t play sports and the training helps me in my work. I don’t feel beat at the end of the day.”

Chris has been an active firefighter with the Hoyt Fire Department for the past four years after opening his own business in Hoyt. He operates Midnight Motors, a truck and trailer garage. He spent four years prior as an auxiliary Hoyt member while he worked as a heavy mechanic in Fredericton. He is trained to the Firefighter Level 1 and 2 and has certification in auto extrication, first responder and as an emergency vehicle driver.

While he loves the competition, it’s the camaraderie with the other firefighters that he’s really come to enjoy. “I pick up tips from fellow competitors, and it’s more of a social kick. I’ve met guys from Whitehorse and clear across the States.

“I’d like to thank my wife and family, members of the Hoyt Fire Department, and especially Fire Chief Daryl Price, for all of their support. Thanks go as well to Fire Training Associates and Mic Mac Fire & Safety for the sponsorship that allowed me to go to the World XIII Combat Challenge.”

Chris also would like to recognize the Fredericton Fire Department’s combat team for their hospitality in Vegas  and to recognize FireFit’s Dale and Hilary McRoberts on “behalf of the New Brunswick volunteer fire service for bringing the combat challenge to all firefighters.”